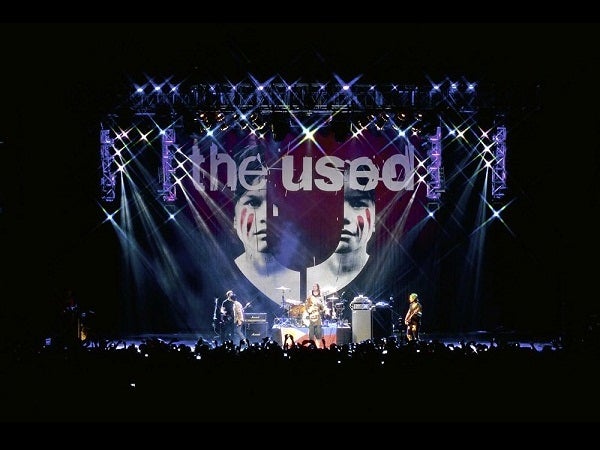 Typecast, Urbandub, Chicosci, One Buck Short, Slapshock, The Cab, Cobra Starship, Chris Carrabba, and The Used. Nine bands, five hours, one stage. We’re willing to bet that most of you are still gathering your wits or nursing a hangover from that night, because we still are.

The SMASH Project concert series was a musical monster with a multiple personality disorder—a gentle giant one minute, a party animal the next, then back to the growling behemoth that chased everyone around until they ran out of breath. Was Manila up for such a challenge? Heck, yes. And it was downright exhilarating.

One might think it was a somewhat interesting choice for a lineup just by looking at the motley profiles of concertgoers milling around at SMART Araneta Coliseum last March 8.

Teens in shorts and sneakers talking excitedly about their respective kilig encounters with The Cab and Cobra Starship members. College kids and yuppies waxing philosophical in low voices about what it truly means to be a Dashboard Confessional fan. And, of course, The Used rakistas surreptitiously inching closer to the stage while the other factions were distracted, the idea of a mosh pit in mind.

But in the end, it was the music that brought people together, no matter which band was playing at the moment. That’s what music festivals are for, after all; there’s bound to be something for everyone to enjoy, whether it’s a favorite anthem or a new discovery. Below are Super’s top 7 memorable moments from that night:

Just when you thought you had no more energy left, Bert McCracken called for a mosh pit. Twice. But lest parents’ eyebrows start hitting the ceiling, the frontman gave careful instructions on how to form the pit in an organized way. “If you see somebody fall, make sure to help them get up,” he said.

Whether that took the fun out of it or not, the participants didn’t care—they did it anyway, and they loved it. By the way, the Philippine flag displayed in front of the drum set for The Used was a nice touch.

6. Gabe Saporta gets up close and personal

Because he knew full well how disappointed his fans were at not being able to see much of him, Saporta suddenly leapt off the stage at the end of Cobra Starship’s set and had some facetime with the lucky fans up front. Anyone get a kiss?

What opening acts? As far as OPM fans were concerned, the four local bands held up their own against the US heavyweights and proved that Pinoys could rock just as hard. Each band performed two to three songs, with three setups assembled side by side onstage to facilitate a seamless transition between acts.

Except for the occasional technical difficulties with the speakers, the first half of the concert was beautifully executed. Malaysian band One Buck Short was a nice surprise, too; its cover of Katy Perry’s “Last Friday Night” was fun.

Seventeen-year-old Patricia, a diehard The Cab fan, had fainted during the second half of the band’s set and consequently missed what she had been waiting for all night. When the band found out, she and her friend were allowed backstage, whereupon the vocalist did the sweetest thing: He sang an a cappella snippet of “I’ll Run” to the crying girl and gave her a kiss while her friend captured the entire thing on video. All together now: Awwww.

He might have looked none the worse for wear by the time their show started, but his pants soon begged to differ. A few minutes into their setlist, a gaping tear suddenly materialized near the crotch area of Saporta’s tight white pants, revealing (thank God) blue boxer briefs underneath. The flirty frontman wasted no time in dishing out cheeky quips at his own expense, like dedicating that song to “the girls who made my pants explode using only their minds.” No wonder he makes them good girls go bad.

Anyone who’s been a longtime fan would know that he’s most in his element when it’s just him and his guitar. So, for this show, “Ay, Carrabba” is all we can say. His voice dipped and soared like his vocal cords knew no bounds, with just about everyone within a five-mile radius belting out his classic heartbreak anthems along with him. Oh, and he’s gorgeous, too. Chris, you have stolen our hearts again—they’re yours to fill or burst, to break or bury, or wear as jewelry. Whichever you prefer. (P.S. Hope you don’t mind us borrowing your lyrics for this.)

As the last act, The Used should naturally have an encore that’s explosive enough to cap off such an awesome night. The moment Carrabba appeared onstage, we knew this was it. After five solid hours of nonstop moshing, the “Smells Like Teen Spirit” teaser intro that segued into the band’s very first hit made even the exhausted ones rush to the front for one last hurrah. Planned or not, the Dashboard frontman growling on the mike along with McCracken and bassist Jeph Howard was just priceless. How’s that for a finale?

“SMASH Project 2012” is produced by DAYLY Entertainment and Dickies Philippines.