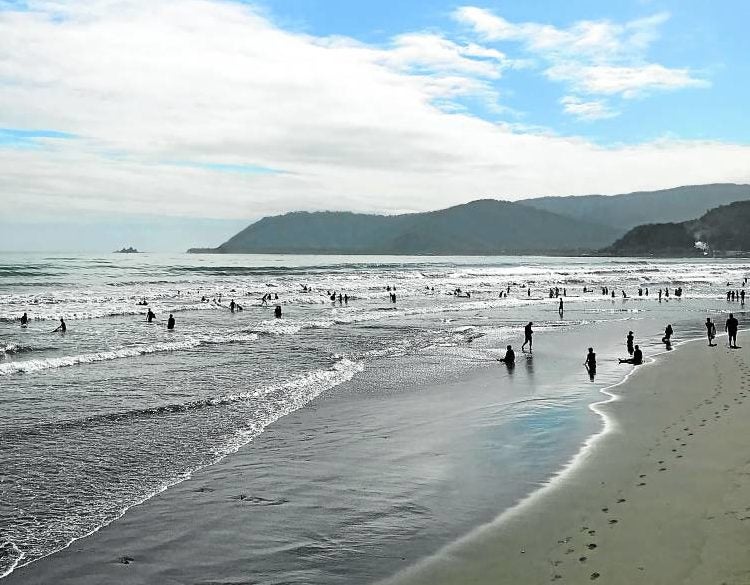 Sabang beach in Baler before the pandemic —PHOTOS BY NIKKA G. VALENZUELA

Going home to Baler for Christmas—finally

I start planning Christmas festivities before December comes—before I receive my 13th-month pay, even.

Christmas is one big undertaking, at least for me. There’s pasalubong for my sister (donuts, as always) and my dogs (treats), the gifts for my parents and inaanak, the “noche buena” items that must be bought in the city (dahil walang brie sa probinsya) and figuring out how to bring all these things home.

There’s also the task of asking the desk if I could take a few days off from work during the holidays. “I’ll be back before the New Year” is what I would always say.

Christmas is one of the two times a year that I get to go home. (The other time is during Holy Week.) It’s also the best time to come to Baler. The weather is chilly, the beach is not crowded with tourists, and my childhood friends are also home.

Don’t get me wrong, Baler has become more accessible over the past few years. Up to my junior year in high school, the bus ride took between seven to eight hours. Thanks to deluxe buses that no longer take pit stops and new highways that course through Central Luzon, travel time was shortened to five hours.

But I rarely went home. The thought of traveling from Makati to Cubao and sitting in a bus for five hours already drained the life out of me. Naturally, when the coronavirus hit the country and lockdowns were imposed to curb the spread of the disease, I regretted not taking advantage of the accessibility.

See, to travel to Aurora province in 2021, at least for returning residents like me, one needs to present a negative reverse transcription-polymerase chain reaction (RT-PCR) or antigen test result issued within a specific number of hours, an identification card with a local address, and some other document.

The buses also stopped running then, so coming home became even more stressful and expensive. There was also the fear of bringing the virus to your family.

But Christmas is Christmas, and I’m really yearning to come home this year and eat home-cooked meals and hug Scout and Yogi, my two noisy dogs. It’s an opportunity to celebrate my and my friend Ferdie’s birthdays, and send off my best friend, Tetay, before her bar exam in January. We’ll swim by the beach, eat and talk about our goofs in high school—like we always do when we’re together. And then I’ll do the same things again with my family, who have also been meaning to go out for a picnic for over a year.

I’ve played and replayed in my mind how COVID-19 cases increase during the holidays. In January, Los Angeles became one of the United States’ hot spots for the respiratory disease. The LA Times reported that gatherings over the holidays “have been a major contributor” in the uptick of cases.

I thank the heavens for sparing me from the virus and science for the vaccine that’s keeping my immunity up. But there’s always a big what-if in the back of my mind. What if I get infected while doing the groceries or when I’m eating out? What if I test positive while I’m home and infect my almost senior parents?

I like to think that I managed to survive the ongoing pandemic because of my paranoia. I worry about contracting the virus so I stay at home all the time, so much that going on a supply run to the nearby convenience store feels like a suicide mission. My decisions were always grounded on the daily numbers released by the health department, but it was really my anxiety that pushed me to just stay cooped up in my apartment.

But I think I’m through with fear. Not to sound cavalier about it, but on the other side of my imaginary legal pad, the pros seem to outweigh the cons. Every single one in my family and extended family have received their shots. Several family members have even received their booster shots, and last time I checked, the vaccination rate in Baler is at a stellar 63.37 percent.

The cases in Metro Manila, as well as in my hometown, are low. The RT-PCR test requirement has been relaxed for fully vaccinated returning residents, and the buses are running again.

Statistically speaking, if there’s a perfect time to go home, it’s now. But more than the numbers, I really feel that after all that we went through in the past 20 months, we all deserve to spend the holidays with the ones we love.

So I guess I—and my brie—will be home for Christmas, and not just in my dreams.