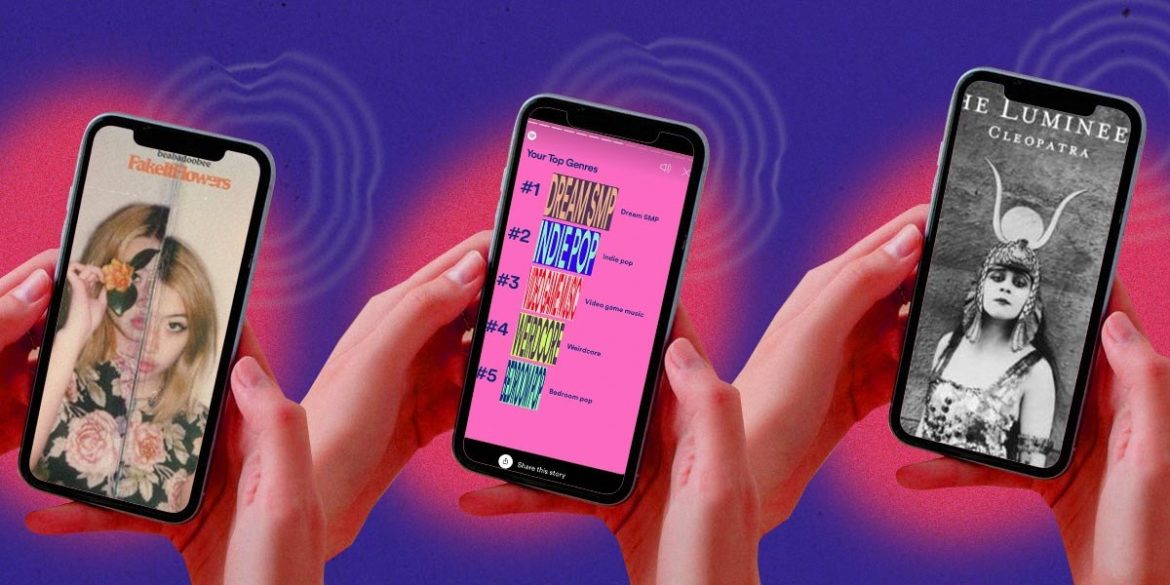 What do these unusual Spotify genres actually mean?

Spotify Wrapped is the season of rhetorical questions, like “Did I really spend 80,500 hours of my life listening to music?” or “I listened to ‘All Too Well (10 Minute Version) (Taylor’s Version) (From The Vault)’ 85 times. Am I okay?” But if there’s anything that really warrants an answer, it’s the list of names that land on “top genres” that make you double-take.

As we currently process what’s left of the streaming app’s attempt at exposing us, we tried to uncover what lies in some of the strange-sounding genres in their equally strange database. Did you spot these on your list, too?

Is this obscure genre the marriage of our smudged 2 a.m. mascara and colorful face glitter? Mayhaps. Taking notes from Urban Dictionary, mid-’90s critics used to label “poppier” grunge or alternative songs as bubblegrunge. It’s indie rock music mixed with “fuzzy, energetic instrumentation with sweet vocals and lyrics,” the classic internet database says. In the yesteryears, bands like Third Eye Blind and Matchbox Twenty were considered to be under the tag. If you need more contemporaries to connect with, a few artists that match the vibe are Lucy Dacus, Beach Bunny, and Beabadobee—who’s probably dubbed the perfect personification of the genre today.

If you’re knee-deep in the Minecraft sphere, you’d know that Dream SMP actually means an invite-only “survival multiplayer,” an exclusive, role-playing server founded by a YouTuber with the alias Dream. So, how did it end up being a genre? That’s also a question posed by some Minecraft players and fans. NME reports that the app has categorized music by SMP players (Wilbur Soot, Tubbo, and Dream himself) automatically under the genre. Moreover, many have also argued that some artists listed aren’t even related to Dream SMP at all.

Any song has the ability to elicit feelings or memories, and those that fall under this name don’t fall short. This hip-hop subgenre—which also appears as “ironic rap” or “satirical hip-hop”—are rap tracks that are served to the world with the goal of virality, or, well, evolving into a meme. Meme rap acts, as Pitchfork put it in 2017, are those “whose entire existences hinge on a meme,” such as Bhad Babbie and RiceGum. For a longer list, here’s a playlist.

Unlike the previous genres mentioned, there hasn’t been a developed definition for this one yet, but you could already tell the criteria with Spotify’s set of Social Media Pop-tagged tracks: “TikTok Cutie” by Stephen Sharer, “Be Happy” by Dixie, “Personal” by HRVY, and the list goes on. Easily digestible, often danceable, and likely “pop” enough to dominate the internet? There you go.

In terms of aesthetics, weirdcore thrives on low-quality images alluding to the ’90s to 2000s internet landscape, often injected with tongue-in-cheek or sarcastic humor that expresses intense feelings—like dread, nostalgia, or confusion. In terms of music, it isn’t so far from its origins…at least based on what we can hear from Spotify’s own curation: disturbing, distorted, and sometimes secretly relatable.

Apparently, folk music isn’t the only common denominator among The Lumineers, Mumford & Sons, and Of Monsters and Men. No one asked, but the streaming app has considered some of their work as “stomp and holler,” which they define as “driving rhythms, intricate instrumentation, and full of harmonies.” Like the rest of the strange-sounding genres that suddenly popped in this year’s Wrapped, people are scratching their heads thinking if this should be called a genre at all.