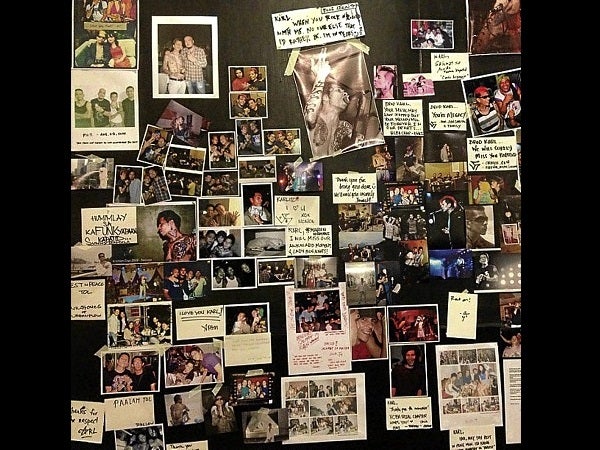 “I met Karl back in ’89 in Club Dredd Timog. He was in Advent Call, a killer band with highly skilled musicians. Karl Roy was fearless and charming and they would win over any crowd everywhere. They would play folk houses, showband joints, reggae festivals, and rock clubs sometimes all in the same night. They were exciting and Karl was always on fire. Offstage, Karl was soft-spoken and sweet. I would bump into him backstage at the shows or in Big Sky Mind nursing a beer, wax poetic on music. I saw him a couple of weeks ago in Saguijo at the Turbo Goth video launch. He was getting a new tattoo. We miss you Karl, rest in peace.” —Raimund Marasigan

“I used to play gigs with Karl’s former P.O.T. bandmate Ian Umali. So when I saw Karl at an event in our old haunt Sanctum, I really went up to him to introduce myself. He was gracious and attentive, and from that point on, that was how I would always know Karl. I had jammed with him a few times, would seek him out for music advice, and I always got a sense of his generosity. The last time I saw him was in Yadu at the Collective in May last year, and we talked for a while about my songwriting. He encouraged me to finish my album and told me to stay true to the music. I’m finally going to do that this year. Thank you Karl for being a kindred soul. It was an honor to know how hugely talented he was, and yet so gentle and down-to-earth. No question why he was so well-loved and revered.” —Kate Torralba

“I really hate it when the first text you get in the morning is news of a fallen comrade. I’ve had my quarrels with Karl, we’d make up. He even once asked me to manage him. My most bizarre memory of Karl is from one afternoon at this posh salon I would go to (all Manila’s famous mistresses would go to it, and their plastic surgeons!). I was having my hair shampooed when from the next bowl came that familiar Marilyn-Monroe whisper “Hi, Liiiiiiiizzzzzzaaaaah.” It was Karl.” —Lizza Nakpil

“I first met Karl in 1992 or 1993, at Weekend’s Live at the Atrium Building in Makati.  This was the period when Razorback and Wolfgang were dominating the stage on a mostly weekly basis, but every so often, Karl’s Advent Call would play.  I was underage but was working as the bartender and Karl and I became friends.  We talked a lot about different kinds of music and being neighbors in New Manila, we got to hanging out quite a few times. Once we were talking about a song and I remember so clearly how he told me that he has respect for anyone that knows the words to the song ‘A Whiter Shade of Pale.’ I immediately got a copy of it and with my cassette player, played and paused the song as I wrote down the lyrics on a piece of pad paper. Another time, I was dating this hot chick who just moved to the Philippines from Jakarta and made the mistake of taking her to see Karl sing.  Needless to say, after a few minutes of watching Karl, she was in love with him and I lost all my chances of making it with her.” —Miggy Matute (AtTheWomb.com)

“Karl had a gift—his voice, the way he performed and moved on stage. I also know there was the Karl the public persona and Karl the private person, who maybe I had yet to know. I also remember driving him home a few times.” —Karen Kunawicz

“My friendship with Karl has spanned over 20 years. He is one of my dearest best friends. There have been too many adventures, misadventures, love, laughter, pain and music to recount one story. He changed the landscape of Pinoy rock. He was always true to himself and others about who he was. He was gentle, soft-spoken and at times crazy—and that’s why I Ioved him. It is sad that he had to leave us but I knew we had him on borrowed time. My fondest memory is how he would always sing ‘My Cherie Amour’ to me on or off the stage, my favorite memory are all our road trips and just laughing together and sharing our lives with one another. I will miss him so much but I guess he would have rather left the party early than stick around. I’m grateful I was able to tell him that I loved him while he was conscious a few hours before he passed away. He will be forever in my heart.” —Katrina Tuason, president, Rogue Media Inc.

“Can’t forget that night when he came to the house and cooked us steak.  Mulan (Anna’s husband, Eric Ong a.k.a. DJ Mulan) and I will always remember his laughter and silly antics backstage and onstage. Rest in peace dear friend, you will be missed.” —Anna Sobrepeña Ong (B-Side Productions)

The last time that we saw each other was at San Mig in Alabang when Brutalgrace was here for a vacation. I don’t even recall the last time that we hung out before that. I’ve missed you, Karl, but I never had the chance to tell you that when you were sitting in front of me so I hugged you instead. To be honest, I was busy trying not to look worried at your state. The result of your last stroke was visibly there and I hated myself for feeling sorry for you because I’m sure that it would have been the last thing that you needed. Karl, I want to remember you as the exuberant guy with one of the calmest talking voices that I’ve ever had the experience to listen to and share stories with. I love how you would call me “Daaaaaahlin.” It was very theatrical and never failed to put a smile on my face. I would miss it every time you’d convincingly tell me that you like my singing voice, you tell me this every time you get a chance. When Chico left us, the devastation was too much for all of us to bear but we pulled through even though it left a scar in our hearts.

I’m terribly broken hearted, Karl. I’m again wounded. There are still a lot of things that I wished I should have said to you, which would have included a bit of nagging like I mostly do whenever I get a chance. Your dahlin’ will miss you so much. Sing to me in my dreams soon. I love you, Karl!