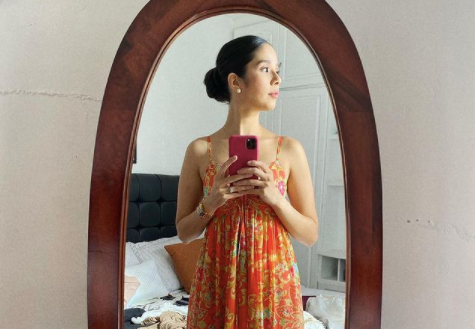 As the lock-in taping for the series “Viral Scandal” ends, actress Maxene Magalona paid tribute to her Audrey Ramones character whom she learned a lot from.

Magalona feels that her character is strong and fierce as she shared on her Instagram page today, Dec. 22.

“Judge me when you are perfect,” Magalona said. She then recalled how her character evolved.

“Today is our last day in our lock-in taping for #ViralScandal so I would just like to honor Audrey Ramones for being the strong and fierce woman that she is,” she said.

Magalona believes that Audrey Ramones can be a “bitch sometimes, but that’s just because she’s only human and can’t help it when she gets triggered.”

“Yes, she still has a lot of personal struggles and internal disturbances that she needs to work on but if you really think about it—who doesn’t?! Who’s to say [that] Audrey’s problems are worse than others’?” the actress asked.

Like any other human being, Magalona believes her character also went through “personal stories of pain and suffering and what the world truly needs now is more understanding and acceptance.”

“We need to stop judging and start loving,” she stressed.

Playing her character has taught Magalona to “be true to who you really are.”

“If you choose to be a narcissistic and self-centered perfectionist, then embrace it and own it,” she said. “The Universe will have its ways of teaching your soul whatever lessons you need to learn in this lifetime, anyway.”

She also thanked producer RCD Narratives for giving her the opportunity to bring to life the character of Audrey Ramones.

“I am eternally grateful. I will miss you, Mayora,” she gave her character a final greeting. “Thank you for being you. Perfectly imperfect.” JB

Maxene Magalona to cleanse, detoxify in quarantine as she returns to Manila from Bali