Jose Mari Chan: ‘Each song is a child that came from the womb of my mind, my heart’ | Lifestyle.INQ ❮ ❯ 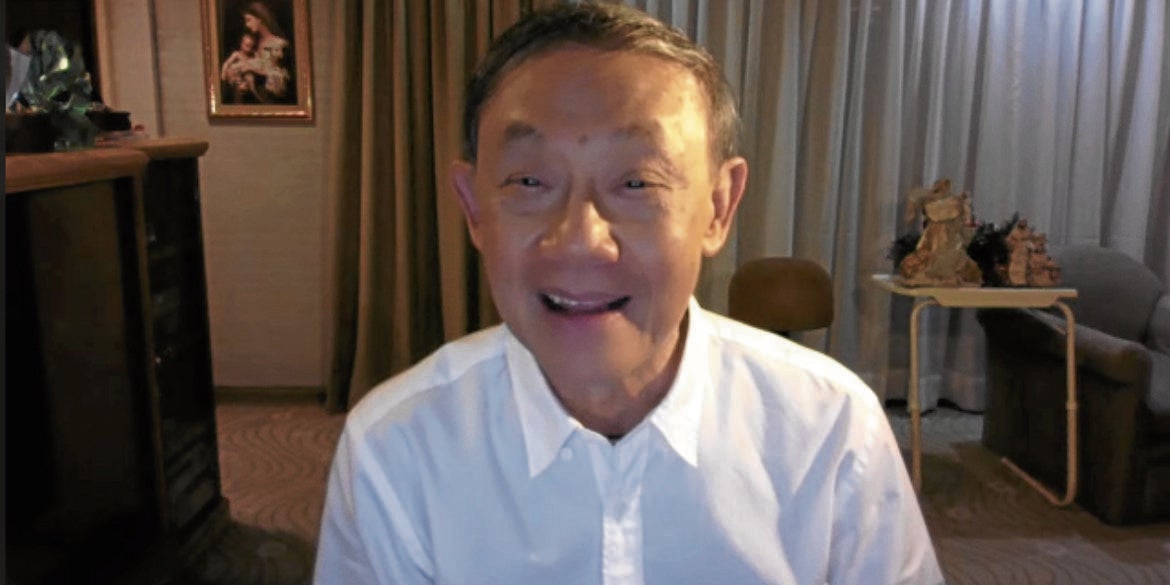 Chan: "I don't know who's behind all those memes, but I feel complimented that they're using me, so it has further increased my popularity in that sense. "

Jose Mari Chan: ‘Each song is a child that came from the womb of my mind, my heart’

As early as August, Jose Mari Chan’s photo, the one where he appears to be peeping from one side of the frame, as if revealing himself after a game of hide-and-seek, had been making its annual rounds on social media.

Christmas in the Philippines begins on Sept. 1, when networks start their countdown to Dec. 25, establishments and even government offices put up their festive trees and Chan’s enduring song, “Christmas in Our Hearts,” plays on loop in every place and radio station. For many people, Christmas begins when they hear the lyrics: “Whenever I see girls and boys selling lanterns on the street . . . ”

But for the 76-year-old Filipino singer and businessman, who is unofficially the Philippines’ main Christmas caroler, the festivities begin much later, on the first day of Advent, when his whole family gathers to decorate the Christmas tree.

“Each child has special ornaments which he or she remembers from 10, 12 years ago . . . It’s the same Christmas tree that we’ve had for many, many years, so it’s meaningful to us that this is not just an ordinary tree, this is our family tree,” Chan told the Lifestyle staff over Zoom.

He recalled that as a kid who had just moved into a rented house in 1950s Iloilo City, where his father started their sugar business, they took a small tree from the garden, spruced it up and dressed it with ornaments.

“It shows you that it’s not how expensive the tree is, it’s how meaningful it is,” the veteran singer-songwriter added.

Chan’s holiday hits are truly immortal, but he also composed and sang timeless love songs like “Please Be Careful with My Heart” and “Beautiful Girl,” which became popular in Indonesia and have been adapted in different languages.

His songs are melodious, heartfelt and sincere, and his lyrics carry a universal message of love, hope and even home. The OPM legend’s song, “Constant Change,” was inspired by his family’s homecoming after 11 years in the United States. Chan and his family returned to the Philippines to restart their sugar business, which was taken from them during the martial law years. Come campaign season, a jingle for Leni Robredo that he had arranged the music for will be heard everywhere.

And while a cheeky Netflix commercial showed Chan lounging in a comfy robe, chilling and relaxing on Dec. 26, and counting down till Sept. 1 of the next year, the singer-songwriter actually keeps busy the whole year by running his business. He doesn’t plan on retiring from his chief executive officer post at A. Chan Sugar Corp. and Binalbagan Isabela Sugar Company any time soon. Just like his ubiquitous holiday song “Christmas in Our Hearts,” Jose Mari Chan is here to stay.

On Sept. 1, the first song that we heard was “Christmas in Our Hearts.”

If you listen to the melody, the first part sounds very Pinoy in the sense that it is played in the minor key, and then it goes to a major key, which is very western. The song itself combines the West and the East. Christmas is a universal celebration. And then I also included the American expression “Happy Holiday.” Some of the Americans are not Christians, so they just say that.

But I made sure that “this season may we never forget the love we have for Jesus,” because He is the reason for the season, why we’re celebrating Christmas.

“Christmas in Our Hearts” is a duet with your daughter Liza. Was there someone else you wanted to sing it with?

My first choice [to sing it with] was Lea Salonga. Unfortunately, her recording company did not want her to record for my label because it’s a competitor. And then Monique Wilson also did a demo of it, but then she lost her voice when it was ready for us to record. So, Liza, my daughter, was my third choice.

Maybe you can record with Lea now?

Maybe, except that, how would it make my daughter feel? If you were my daughter, after 31 years, I will get somebody who’s a big star to sing with me, you will feel a little bit hurt.

Was there ever a time that you got tired of singing “Christmas in Our Hearts”?

Never. Thank God. When I used to do concerts here and abroad, I would sing my various hits. I never got tired of singing those songs, especially when they are requested.

Each song is a child that came from the womb of my mind, the womb of my heart. I’m proud when my song becomes popular. It is like saying that my child became successful in life.

And then I’ve had many, many songs that didn’t quite make it. And I feel bad lang that those songs were not handpicked to be plugged on the radio so people are not aware of their existence.

I feel bad because it’s like one of your children was unable to finish schooling or whatever, hindi niya na-maximize ang kanyang potential. But the songs are always there and they’re open for revival anytime in the future.

What is your favorite Christmas song aside from your own?

“O Holy Night.” It’s so solemn and so beautiful in describing that holy night when our Lord was born.

What do you usually serve on your table during “noche buena”?

What does your wife think about you becoming this Pinoy Christmas icon?

Well, to me she’s my Mrs. Christmas.

Your picture is not only a meme, but you’re a silhouette as well. It’s like people already know it’s you.

I don’t know who’s behind all those memes, but I feel complimented that they’re using me so it has further increased my popularity in that sense. But some of the memes I found are irreverent and I don’t know whom to call and say, “Huy, tanggalin mo ’yan, it’s not proper.”

How busy has this December been for you, and how is it different from last year, the first pandemic December?

I’ve been doing a lot of the virtual concerts, guesting here, guesting there, one song here, one another song there, and then I was fortunate that Uniqlo and Shopee got me again.

Do you have an unforgettable fan moment?

Some years ago, I was invited by Gov. Imelda Dimaporo to do a concert in Lanao del Norte. It was held in a big gymnasium and it was packed with people. So I was singing my hits, especially those hits that were familiar to them.

I was so touched, considering that the audience was predominantly Muslims who don’t pray to Jesus. And here they were, singing it as though it’s a popular song. That was a very touching moment for me. And that’s when I realized that the song transcended borders; it transcended religion.

What do you do to stay sharp?

Do you plan on retiring from running your business and just relax?

No, because my father warned me before that the minute a person retires, the mind starts to disintegrate. I have no plans of retiring, but I delegate a lot now. I have five children and they’re all working for me, so I delegate the responsibilities, but I’m still on top of it.

It’s like you have a dual life because you’re a businessman, and then you have your singing career, on top of the whole Christmas thing.

The important thing is to keep a balance—balance of business and my music. My music is my passion. My music is my love. But I also have to know my priorities. Business is the one that supports my family, and I’m responsible for the lives of 900 people working in my company. So, priority.

At company parties, do your employees sing your song?

Have you always been technologically adept?

I’ve learned to get into Zoom quickly because of, sad to say, many novena masses for friends who have passed away.

Have you been going out?

I’m very, very particular about the health protocols because not too long ago, we had six COVID-19 cases in the house. I’m very, very careful because at my age, I’m susceptible.

Did you ever feel cooped up when there were lockdowns and seniors could not go out?

Not really. You have to sacrifice when the sacrifice is needed.

Are you familiar with K-pop? What are your thoughts on its popularity in the Philippines?

First of all, they’re good-looking and they dance very well. (Laughter) And their songs are catchy.

Kaya lang, of course, I’m older, so that’s not the type of melodies that appeal to me. Very often, when I review the songs from the ’50s, ’60s, ’70s, ’80s, the songs that were written were melodious, and there’s like a progression, it builds up and then it ends also with the emotion.

What music do you listen to?

There are certain stations that I listen to that play old songs, but occasionally I get my favorite CDs, my favorite singers and I play them. Especially on long drives, I like to listen to something that brings back nice memories.

So who are these favorite artists?

It might take two hours for me to name these favorite artists, but let me start with Frank Sinatra, Jack Jones, Matt Monroe, Rosemary Clooney, Joni James, Barbra Streisand.