The saga of ‘Rizal in Saga’ | Inquirer Lifestyle ❮ ❯ 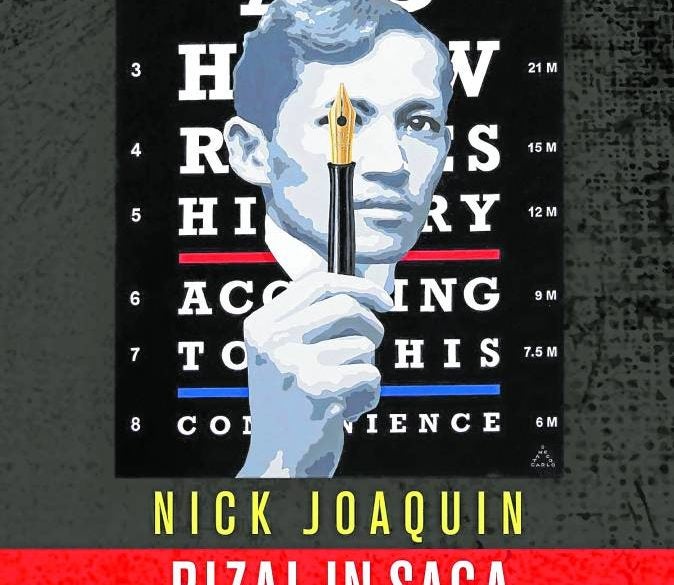 The saga of ‘Rizal in Saga’

Perhaps the rarest book by one of our greatest writers happens to be the one about the greatest of Filipinos. This publishing paradox was made possible by a confluence of unusual events that kept the aforementioned title out of most hands—until now.

In 1996, the Philippine National Centennial Commission and GMA Foundation Inc. commissioned National Artist for Literature Nick Joaquin to pen a new biography of Jose Rizal for a young audience. This book became “Rizal in Saga: A Life for Student Fans,” and, instead of being sold commercially, was given out as a souvenir for 1996, the centennial of Rizal’s martyrdom on Dec. 30, 1896. Because of this, very few “student fans” have actually read the book intended for them, and the book has become the “long-lost” Rizal biography, especially after Joaquin’s death in 2004.

But you cannot put a good book by a great writer about a great Filipino down. In 2020, after being general manager at Anvil Publishing Inc., Andrea Pasion-Flores bought Milflores Publishing, the house the venerable Cristina Pantoja Hidalgo and her late husband Antonio had established in 1999.

The new Milflores had already picked up good word-of-mouth with its publication of Charlson Ong’s latest novel, “White Lady, Black Christ,” but Pasion-Flores was already working on another project before that: a new edition of “Rizal in Saga.” “I’ve been wanting this biography for a long time ever since I read a photocopy of it—because there was nowhere to find a commercial copy to purchase,” she explains.

So she reached out to Charo Joaquin Villegas, Joaquin’s niece and administrator of the Nick Joaquin estate. “I was relentless in bugging Charo. I really love Charo for trusting me because, at that time I was asking for it, I had no titles out yet, not even Charlson’s,” Pasion-Flores says.

Villegas backs up this story: “I was all for it! I immediately said yes since the book was already out of print. In addition, I knew that Andrea was just the person to do an excellent job.”

It would take two years to get it all done. Because there was no digital file of the book, Pasion-Flores typed up the text herself. The next step she took was a very important one: She recruited Ambeth Ocampo, prominent historian and Rizal expert, to provide an introduction and annotate the new edition.

“It was very important for me that Ambeth be part of this project because I feel Ambeth loves Rizal the way Nick loved Rizal,” she said. “Ambeth practically dedicated his life to the study of Rizal. I remember someone telling me once that the problem with Nick’s biography was that it lacked references. So, I thought if there was anyone in the country who could contextualize this book, it would be Ambeth. No one else.”

Ocampo had no problem saying yes. “Rereading the text made me realize that it needed some annotations, some updating based on my never-ending research on Rizal,” he says. “That’s how I ended up so engrossed in the book. I felt it was my way of paying back all that Nick taught me through his historical essays.” Ocampo went above and beyond by providing his own photographs and captions. “What’s great about Ambeth was, from the get-go, he took it upon himself to give the project the attention it deserved, including taking on the job of photo editor,” Pasion-Flores says.

Ocampo seconds this: “When I was sent a PDF file of the rough book, I realized that the photos were not good, so I offered to supply them from my collection, with captions.”

Villegas honored a Joaquin tradition in her own way in “Rizal in Saga”: “We helped in the proofreading. We don’t want Tito turning in his grave! He did his own proofreading, after all!”

“Rizal in Saga” is actually a very unusual Rizal biography in many ways. Villegas points out the first element: “It dealt much more extensively with the young Rizal than the mature hero.”

Indeed, most of “Rizal in Saga” extensively deals with the young Rizal’s childhood and growing up than any other book you’ve read. As Ocampo notes, Joaquin spent 23 of the book’s 35 chapters on Rizal’s youth. It deals with such a human Rizal, his incredible insecurity about his height, for example (he was estimated to stand 5 feet tall as an adult).

“Is it possible to know Rizal differently from how we know him in our national consciousness? The answer is a resounding yes. Can he inspire us again? Yes! He was flawed, but he was determined. Nick brings that out. Nick tells us we can overcome because Rizal overcame his flaws and succeeded,” Pasion-Flores says.

Joaquin also spent an inordinate amount of time poring over Rizal’s writing of the novels “Noli Me Tangere” and “El Filibusterismo.” Just count the number of pages spent discussing the character of Maria Clara and what she really meant for Rizal.

Beyond that, there is that unmistakable Joaquin style. Take, for example, this section he wrote about Rizal’s trial: “Like the Proust epic, the Rizal trail was a remembrance of things past. In other words, he was tried retroactively and penalized a second time for the same alleged offenses, the second penalty being the firing squad at Bagumbayan. The bullets that killed him were unlawful.”

Ocampo says there is a message even in the structure of the book. “There are many textbook biographies of Rizal that are written to bore the reader,” Ocampo writes in his introduction. “The 35 chapters remind us that Rizal’s short life spanned 35 years and we, too, can do great things before we turn 50.”

It’s also a very detailed read, with so many stories (Ocampo calls them “surprises”) within the bigger narrative you may not have read before, proving the point that “Rizal in Saga” was meant to be read, as Ocampo notes, “for its literary rather than patriotic purpose … It is Nick Joaquin’s unique insight into a story we think we know so well that makes it stand out from the rest.”

Visually, the book also brings the life of Rizal to life as it includes the expected (the famous studio photo of a 29-year-old Rizal in Madrid) to the unexpected (a drawn “selfie” by Rizal when he was 26). This is contrasted with a radically modern book design by Mikke Gallardo.

“It’s a delight to touch and hold, the typeface, endpapers, dust jacket and typeface bring an old 19th-century life by a 20th-century writer into the 21st century,” Ocampo says.

“I knew I wanted him to do ‘Rizal in Saga’ because Rizal is hard to do,” Pasion-Flores says. “Rizal is everywhere: in the legal tender, in statues in roundabouts, in matchboxes, on stamps, in the name of a province, a religion. Rizal is difficult to do because he’s been done a million times. I needed a fresh take on Rizal the way Carlo does Yayoi and Dali, so this important book wouldn’t be ignored. I needed people who would look at the book to do a double take because it’s Rizal seen in a different way but still the Rizal of our consciousness.”

Once on board, Tanseco took three weeks to finish: “The graphic and more straight-edged parts were done in Manila, while the hyperrealistic elements were done in Siargao.”

Tanseco adds, “The theme uses elements which represent his profession as an optometrist with both the eye chart as background, and the human eye as a focal point of the composition. As part of a series, each one is unique in both the eye chart letters that form a quotation from Rizal and the depiction of the eye and how they relate to the many facets of Rizal’s person. Rizal peers through the hole in the nib of a fountain pen which serves as an unorthodox oculus through which he views the world and how he conveyed his revolutionary ideas, thoughts and teachings.

“I am a fan of encryption, hidden messages and Easter eggs. This particular piece borrows a quote from Rizal: ‘Each writes history according to his convenience,’ formed by the letters in the eye chart. This is found in a letter to Blumentritt in Leipzig, dated Aug. 22, 1888.

“Rather than taking this as a negative commentary on how history is as accurate as the words of the victors and the whims of the writer, I understood it to mean that people have control of their own fate and ultimately their own story, and then collectively, a society’s history.

“And this message corresponds with Rizal’s image looking through his pen nib and another message in cursive style under the hole which reads ‘SOLO HUMANO’ or ‘ONLY HUMAN,’ which is really what he was, with all his shortcomings and flaws, but it is what he did despite this that makes him an amazing person. It is only a pen, until the writer gives life to it.”

“Rizal in Saga” also comes in a notably deluxe hardcover package. “Hardcover because it’s the kind of book that deserves to be in hardcover,” Pasion-Flores says. “Also, it’s already a big book to begin with at 308 pages. It was going to be an expensive book anyway, so I wanted it to be worth the money.”

For Ocampo, “The project reminded me that I, too, have to write yet another Rizal biography, instead of compiling essays on him like my latest book ‘Queridas de Rizal: Looking Back 16.’” Now, one of Philippine publishing’s forgotten finds has returned, like “Noli’s” Ibarra, but as “Fili’s” Simoun, with a different guise but the same soul.

The Milflores edition of “Rizal in Saga: A Life for Student Fans” now has a chance to be found by the student fans it was meant for—as well as everyone else.

“I think readers will rediscover Rizal the writer, as portrayed by the country’s most lionized author, in conversation with Ambeth Ocampo, the country’s premier expert on Rizal, “ says Pasion-Flores.

“Since Tito Nick had this gift of bringing his reader to see, feel, smell what was in the pages, I hope more people will truly understand our national hero,” Villegas says. “This is how I hope history will be written!”

“I hope that after reading ‘Rizal in Saga,’ readers will be curious enough to read Rizal’s diaries and letters, for there is no better way to know Rizal than by reading Rizal,” Ocampo concludes. “Nick Joaquin’s ‘Rizal in Saga’ is the first step in the proverbial journey of a thousand miles.”