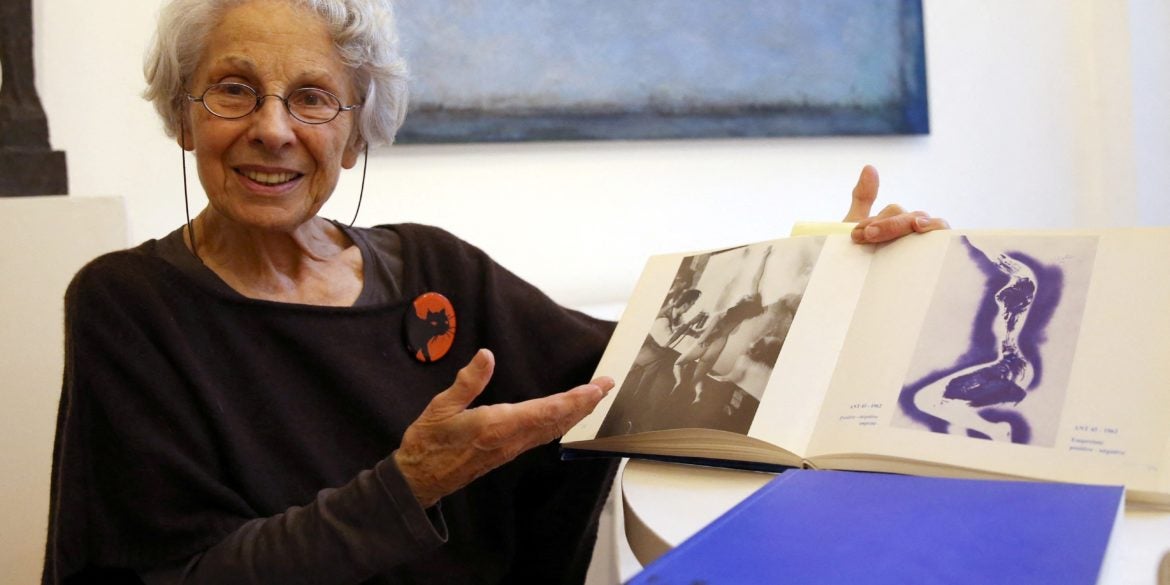 Italian Elena Palumbo-Mosca poses during an interview in Brussels on December 29, 2021. (Photo by François WALSCHAERTS / AFP)

‘I am not an object,’ says French artist’s Blue Woman

Brussels, Belgium — For art aficionados, she’s a Blue Woman featured in dozens of French artist Yves Klein’s “Anthropometries” – conceptual paintings of nudes achieved by daubing models in blue paint and having them press their bodies on paper.

But Elena Palumbo-Mosca rejects being called Klein’s “living paintbrush.” She sees herself as an artistic “collaborator” who played a key part in the artist’s famous oeuvre, which today sell for fortunes.

“I am not an object, but a person who shared with Yves specific ideas and who helped him to create them out of friendship and out of curiosity,” Palumbo-Mosca, who turns 87 on Friday, told AFP in her Brussels apartment.

The Italian muse did not earn money from sales of the “20 or 30” works to which she contributed. She spent three decades working as an interpreter for European Union institutions in the Belgian capital.

But her home is strewn with art. Her memories are too: a French Riviera stint as an au pair to a couple who were friends with Klein, then her youthful Paris student days she funded by working as a cabaret dancer.

It was in February 1960 that Klein unveiled his conceptual art in his studio, using Palumbo-Mosca and other women.

In March, she took part in his first public presentation, held in a Paris gallery, which critics described by using the term “living paintbrush,” which she came to resent.

The invited audience, she said, was electrified by the performance during which Klein – dressed in a black dinner jacket, with a white bow tie and white gloves – directed his paint-slicked models.

“Some tore out their hair. Others applauded,” she recalled.

“It was clear that we were doing something that nobody had ever done,” she said – not that she was able to linger long with the well-dressed crowd.

“As soon as we’d finished our work, we went to wash ourselves off off-stage – the paint, after all, was toxic.”

Klein had patented the ultramarine hue of the special thick paint he developed for his paintings, calling the mix of synthetic resin, matte, and pigment “International Klein Blue” or IKB.

The task of applying the paint was very physical, but Palumbo-Mosca was well prepared, having spent a childhood skiing and ice-skating, and having been a champion artistic diver as a teenager.

She also helped Klein as he embarked on his “Fire Painting” series, in which he used an industrial blowtorch to sear compositions onto combustion-resistant cardboard at a testing center owned by Gaz de France.

Those works, Palumbo-Mosca said, were “a culmination of his thought – the divine expressed through water and fire corresponding to Japanese cosmogony”, conceptions concerned with the origin of the universe.

Klein died in 1962 of a heart attack, just 34 years old. Today, his works – particularly his “Anthropometries” – can sell at auction for tens of millions of dollars.

Sotheby’s has described his oeuvre, “using the human body as an anthropomorphic brush,” as having opened “a new frontier of painting.”

“Klein broke apart the very definition of painting, radicalized the enduring art historical motif of the nude, and laid conceptual foundations that have continued to inform performance art to the present day,” it said in notes accompanying an auction two years ago.