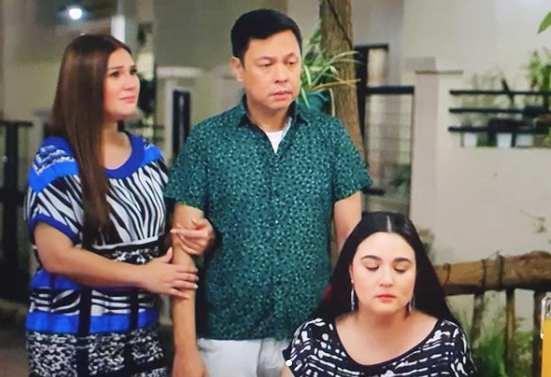 Jett Pangan goes from rock star to teleserye star, with love for his castmates

Playing father to Angelica Lao and Luis Vera Perez in “Marry Me, Marry You” is something that singer-actor Jett Pangan cherishes.

“Ako, I really enjoyed working with my ‘kids,’ sina Luis and Angelica because na-feel ko talaga ang bond namin as a family. Iba ang journey namin as Jacintos pero as we went on taping ay na-develop talaga ‘yung bond between characters,” Pangan said during the Jan. 4 online press conference for the series which is now on its last two weeks.

(I really felt our bond as a family. Our journey as the Jacintos is unique, and as we went on with taping, that bond between characters was really developed.)

Pangan, frontman for acclaimed rock band The Dawn and an accomplished theater actor himself, lets his younger co-stars do their thing, giving tips and advice only when asked.

“Personally speaking, kapag tinanong lang naman ako (only when I am asked). And I will give my two cents. But like everyone has already said here, everyone here is really doing their part,” he said, noting that for him, the experience is a “magic combination.”

“Everyone is really on top of themselves. Talagang ginawa nila ‘yung kailangang gawin (they really did what is needed to be done),” he added.

With a big and stellar cast, Pangan marveled at how each cast member was able to stand out and shine on their own.

“Ang dami talaga namin (We are really a huge cast) but we’re able to really find our spots, our corners in the story. Magaling din kasi ang nagsulat (It’s because the writer is also great). It’s one cohesive unit,” he noted.

When asked what he can’t forget as the show nears its end, Pangan said it’s the camaraderie and the generosity of the cast.

(Specifically, thanks a lot, first to Adrian for the scented candles in our hotel rooms, to Paulo for the lechon and the food we always have on set.)

(Thanks to all the cast members who make up “Marry Me, Marry You”… I’m sure it radiated in all our performances, that we really are one family here.)

“I fell in love with everyone,” Pangan noted. “It’s a great cast.”

“Marry Me, Marry You: Merrily Ever After?” is airing its last episodes on weeknights at 8:40 p.m. via the Kapamilya Channel, A2Z, TV5, and Kapamilya Online Live on ABS-CBN Entertainment’s YouTube channel and Facebook page. JB

‘Send It To Me’: Rolling Stones honored with Royal Mail stamps