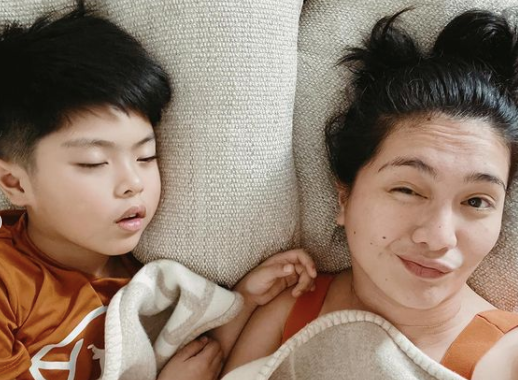 Actress Dimples Romana and her husband Boyet Ahmee were greatly moved by something they witnessed after they recently disciplined their son Alonzo for committing a mistake.

Romana spoke about the incident on her Instragram page yesterday, Jan. 12, where she shared a short video of her son facing a wall.

(When you ask your child to stand in the corner as a form of disciplinary action, then you see that instead of getting mad, throwing a tantrum, scratching the paint on the wall (like I used to), he prayed. Oh, my son.)

(I and Boyet were swept by fear of the Lord that we had to apologize to Alonzo and explain.)

“On a serious note, my heart melted soon as I saw this and I asked him what he was saying in prayer. And he said, ‘I asked God if I am a BAD PERSON and if he was disappointed in me mom because I did bad things,’” Romana shared.

When she asked her son if God answered him, Alonzo said yes. The boy explained that God told him he was “not a bad person” but just someone who “made a mistake.”

“And if you ask for forgiveness you will be forgiven. Because everyone sins everyday,’” her son added.

Romana, in the end, was glad to observe her son being comfortable praying and talking to God, not only when he is happy but also when he feels sad. She also commended her husband for helping her raise their son well. JB

Dimples Romana on giving away produce from farms: ‘It’s a form of our love’