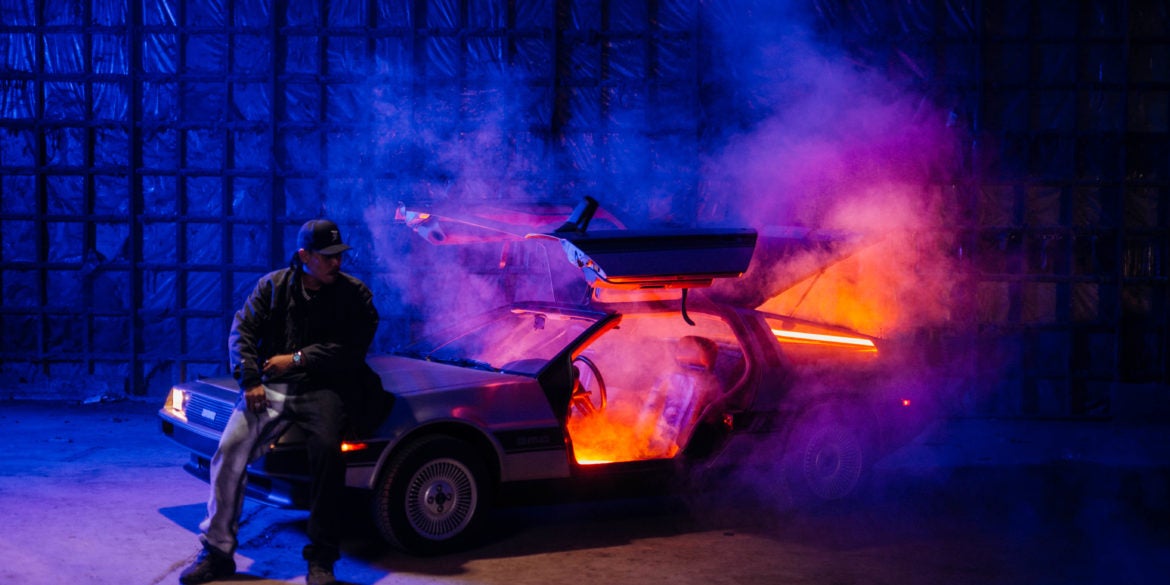 By the time you read this, Al James’ latest single will most likely be out. After a year of radio silence, he shared a short video snippet featuring a DeLorean cruising along a narrow street, followed by the following visual motifs, in this specific order: 1) Al James walking towards the DeLorean, 2) thick clouds of smoke, 3) neon lights, and 4) quick, glitchy transitions. Deep sub-bass stacked by catchy synths permeates the short video, reaching its climax towards the end with a single line, assumed to be the hook of an upcoming single.

Even in its very short length, the teaser managed to send impassioned pockets of the internet into a frenzy, partly because it signals that he’s back, but also because the video captures everything that makes Al James who he is: a mood-setter in both sight and sound, enough to top the charts and rack in millions of streams with more than a handful of hits, released almost inaugurally since 2016. Nearly all of his tracks are accompanied by a visual, and both work perfectly in sync to communicate a singular, laser-focused feeling: the sustained moment of trance-inducing euphoria. In other words, a good time.

Born Alvin James Manlutac, Al James was raised in San Juan. He grew up listening to Boyz II Men and Janet Jackson, but his first love wasn’t rap but graffiti. “Sa circle of friends ko nalaman na sila pala yung mga [gumagawa ng graffiti sa kanto ko].(I found out that it was my friends who were doing the graffiti I saw in my street),” Al James says of his high school days. The majority of his cohorts liked hip-hop enough to regularly attend live events, which is where he has introduced to not just the local hip-hop scene but a wide creative underbelly that brought all intersecting interests across music and art together in one place at a time, such as Cubao Expo and the now-defunct B-side in Makati City. At these same venues, he began participating in cyphers – a cyclical rapping session built on improvisation – where he began to form his skills.

He continued well into college, where he took up Fine Arts at the University of Santo Tomas. He and his friends took turns recording their verses and uploading them onto Soundcloud. Somewhere along this time, he and his college friends formed Fifth Wave Theory, a “Rap & B” outfit under Flipmusic.” Doon lang din kami natuto na okay din na maghook sa kanta,” he says. “Learning phase namin ng mga kasama ko doon na gumawa ng kanta at hindi lang rap verse (That’s when we learned it’s also good to use songs as hooks. It was our learning phase for us to learn how to make song and not just a rap verse).” 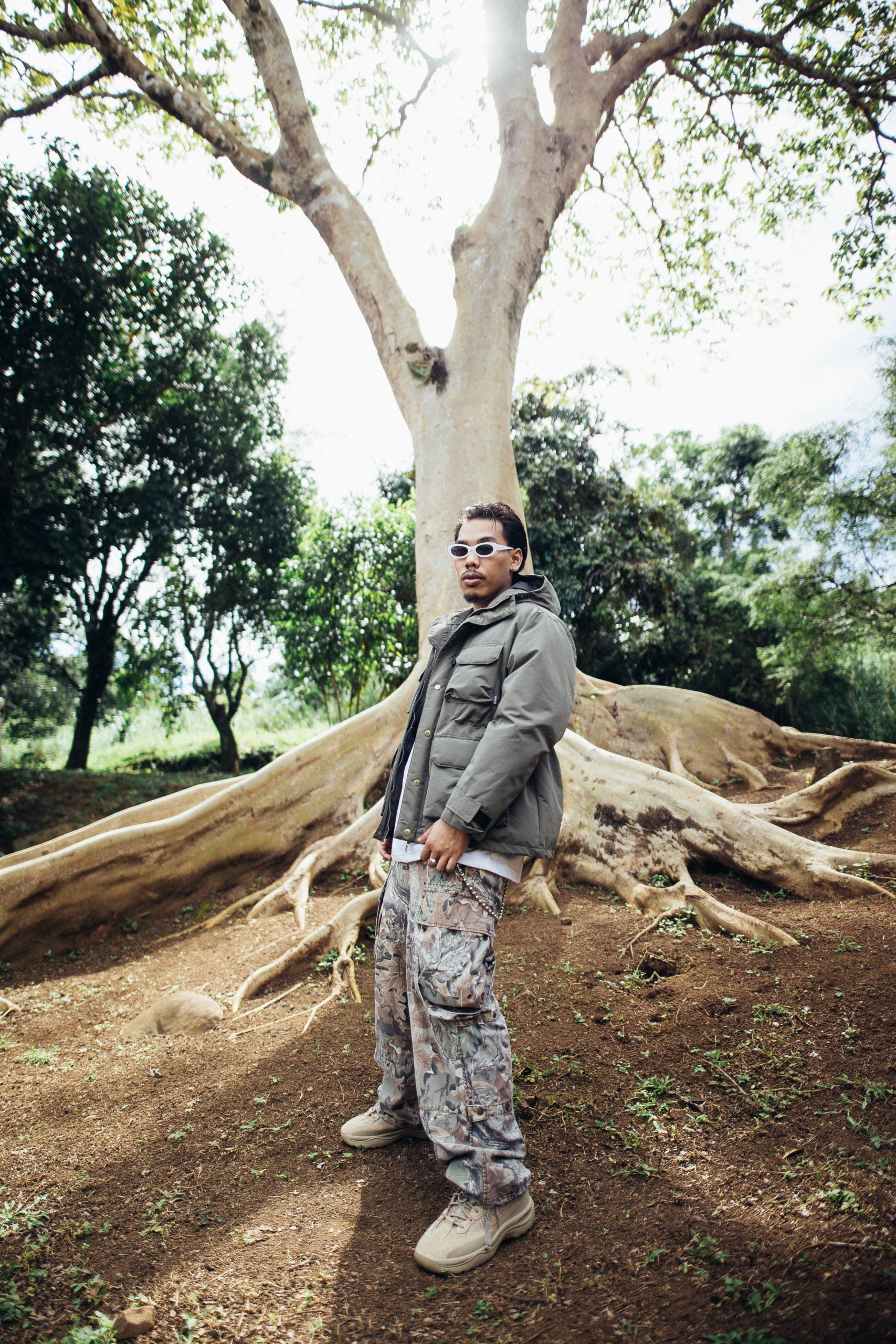 But in his current group, Baryo Berde, he came into his own and started making waves. As a group, Baryo Berde hopped on a blossoming local hip-hop scene that was not only filled with exciting new directions in hip-hop but one that drew mainstream appeal. During this time, Al James as we know him today rose into prominence; before Baryo Berde performed their songs onstage, they would take in their individual members to perform their singles, Al James included. When Al James started performing “Pahinga,” a mood-driven, syrupy introduction to his signature deep voice and atmospheric melodies, he met audiences moshing to his song. It clicked.

It would take a year of Al James taking “Pahinga” on the road in between Baryo Berde sets before it would get traction on Soundcloud. During this time, he decided to quit his advertising job and pursue music full time. But the track’s release on YouTube at the tail end of December 2016 led to his sudden rise. And just at the right time: the gears were shifting in the industry, and Al James, along with a wide range of talented local artists, were breaking into the mainstream.

A little over two years after “Pahinga,” McDonald’s Philippines tapped Al James to create the music for their upcoming summer campaign. “Naalala ko nun, ako, Maymay [Entrata], at Ex Battalion ‘yung mga choices para sa campaign na ‘yun (I remember that it was me, Maymay [Entrata], and Ex Battalion who were the choices for that campaign).” To create “Palamig Ka Muna,” he collaborated with fellow Fifth Wave Theory member and acclaimed songwriter Thyro Alfaro. In many ways, the seeds he planted early on in his career were bearing fruit.

Since then, Al James has built a presence no one else in hip-hop could really replicate. Marked by almost inaugural releases that somehow became the soundtrack of the youth, festival headlines, and mainstream breakthroughs by way of Coke Studio partnerships, he’s become an entity on his own, all before turning 30.

Like many, Al James had plans in motion that were halted by the pandemic. In the third week of January 2020, he released “Repeat,” his first single featuring Rjay Ty and Lexus. The first recorded case of COVID-19 in the Philippines was announced two weeks after. After months of waiting it out and staying idle, he decided to take a break from the music and focus on things previously in his peripheral vision: himself and his family. “Kumalas din muna ako (I stepped back a little bit),” he says. “Binitawan ko muna yung mga ginagawa ko. Tinapos ko ‘yung mga kailangan tapusin tapos bumitaw (I let go of the things I was working on. I finished what needed to be finished before taking a step back).”

At the onset of 2021, and coronavirus cases declined, he tried to get back into the studio to start anew. One of his projects materialized: “PSG,” which ended up on the back burner longer than he expected. He knew that this comeback of sorts would need to surpass his previous efforts.

“His attention to detail is different,” Douglas Brocklehurst, an events producer Al James tapped to produce the “PSG” music video, shares over Zoom. “His artistry shows whether it’s his movements on camera or with his music, which I’m glad to see firsthand.” Even before his mainstream success, he’s been hands-on with not just his music but also how it was going to be released. He designed his early singles’ cover art himself.

“PSG” does not stray far from the trappings of his own direction. Still, it is more ambitious in production: A pair of expensive and rare Nike Air Mags is prominently featured on his feet, while the DeLorean, one of the only two units in the Philippines, suggests an image of not just luxury but nostalgia. The Back to the Future homage dials that in while also making a nod towards his much-anticipated return.

However, more than the spectacle is an attempt to move past his mythology by making an honest effort towards his brand building. He partnered with Coziest, a local clothing brand that sponsored the music video for “PSG” to create an exclusive collaborative line of merch that sold out within hours of the release. And while he has dabbled into YouTube by way of handheld vlogs, he’s set to release a behind-the-scenes video that takes a deeper, more personal look into his life.

In a way, he’s making up for his absence in the past two years, but unknowingly, he’s also piercing the facade that his audience has built him up for. During his radio silence, theories surrounding his existence ran rampant: people posited that the government manufactured him, or that he was a ghost. To that, Al James is pretty much aware. He laughs it off at first but then suggests that the online chatter helped his career. “Pag nagpahinga ka, naghahanap ka ng wave kung paano ka papasok ulit. Pag may [acknowledgment] sa ganun, sunod-sunod silang magre-react (When you’re taking a break, you’re looking for a way to get started again. When you get [acknowledgment], the reactions keep coming in).”

Al James represents a certain sense of nostalgia, a longing for good times through the lens of post-pandemic realities. With “PSG,” his fans might scratch that itch. And maybe more: something more than a single might be looming at the horizon. It’s always been in his mind. And for someone who’s bridged the gap between mainstream and the underground more than once, he’s ready to break ground yet again.