Leni: ‘The last 5 1/2 years have toughened me up’ | Inquirer Lifestyle ❮ ❯ 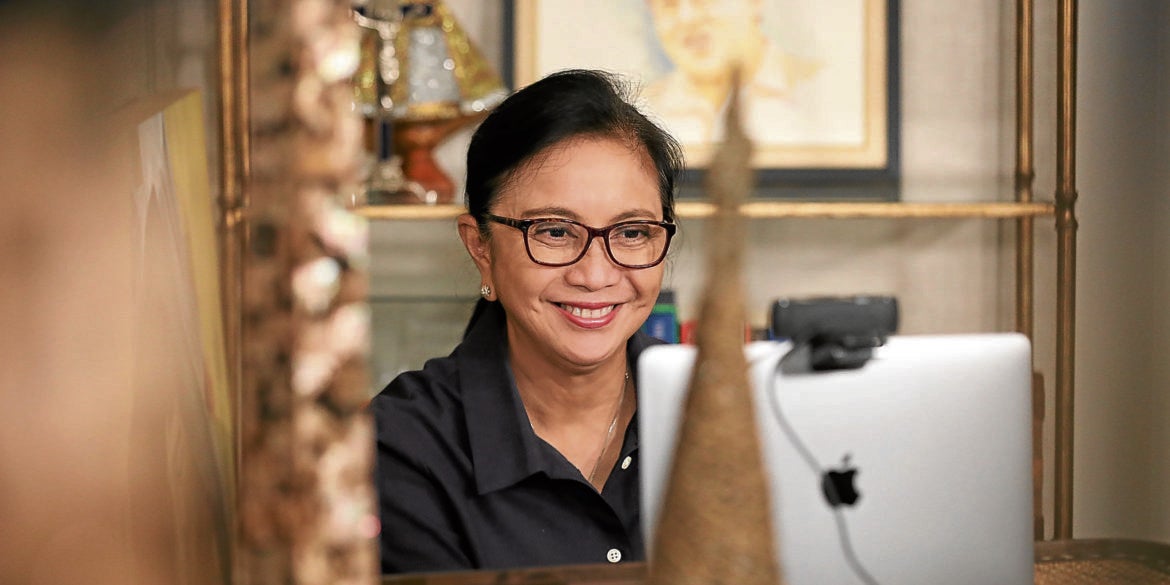 “I’m not easily ruffled by a lot of things.” —OFFICE OF THE VICE PRESIDENT

Vice President Leni Robredo has made it clear before that there will be no room for romance in her life. But lighthearted rom-com films are always welcome.

“There will definitely be no first gentleman,” she repeated again to lifestyle journalists in a casual virtual roundtable interview earlier this week.

“I think I have said this so many times, ang swerte ko sa asawa ko (I got lucky with my husband) and I don’t think I can ever find somebody who can approximate him,” Robredo said, referring to her late husband, former Interior Secretary and Ramon Magsaysay awardee Jesse Robredo, who died in a plane crash in 2012.

Though Robredo may have drawn the curtains on that department, she watches romantic comedies to relax from time to time.

This preference also applies to K-dramas, as the Vice President chooses “light, fun ones” over heavy dramas. It has been months since she was able to unwind and watch Koreanovelas with two of her daughters, but some of her favorites are “Reply 1988” and “Descendants of the Sun.”

‘The little office that can’

In the last five-and-a-half years, Robredo has turned the Office of the Vice President (OVP) from a ceremonial one to “the little office that can.” Her stint has been recognized for her efficient response to the COVID-19 pandemic and her productive collaboration with the private sector to uplift marginalized communities.

But it hasn’t been a smooth ride for her. She has been excluded by the administration, been on the receiving end of misogynistic remarks, targeted by trolls and so much more.

Still, she has been nothing short of diplomatic, and has focused on her goal of empowering members of the marginalized sector.

“I’m a positive person. I’m not easily ruffled by a lot of things. It will take so much to really affect me,” she told reporters over Zoom.

Here’s an excerpt of the interview:

Can you tell us about some of your favorite memories growing up in Naga?

My dad was a practicing lawyer before he became a judge. My mom was a teacher at a local university where we also studied. She would teach English to grade school and high school students, but she also taught night school in college. She would go home at about 7:30 p.m.

My father picked us up in the afternoon, we’d go home and do our assignments. What I looked forward to the most was, before we picked up my mom, my dad would buy peanuts in the plaza, which was right across from the PNB (Philippine National Bank) building. There was a dancing fountain there and every night we watched the fountain to kill time.

Pink has been the defining color of your campaign. Have you always been fond of the color?

No. I was wearing blue (during the announcement of the candidacy) because after I decided to run, some friends told me that my lucky color is blue. I like blue. But the day that we arrived at the office, there were supporters there who were all in pink and the entire back gate of the OVP was filled with pink ribbons, so I scampered for a pink ribbon and pinned it on my blue blouse.

It is the color that united all the supporters. I’m happy with the choice. It represents hope, it represents unity among all the many different groups who are helping us now.

Where do you shop for clothes?

I don’t shop anymore. The blouse that I was wearing [on Oct. 7], I bought from a Katutubo fair, a Rhett Eala blouse that everybody commented looked good on me. I asked my staff to check if they have a pink version—I’m wearing it now. A lot of friends have been giving me pink blouses so I don’t need to shop anymore.

How do you take care of yourself to make sure that you’re in top shape?

I have been taking vitamins on a very regular basis. Right now I feel like it’s what’s [keeping me] from getting infected. I’ve been in close contact many, many times already and, knock on wood, I haven’t been infected yet.

There’s always a double standard that women have to look a certain way. Do you feel pressured to look good on camera, and do you have a skin care routine?

I’m not really pressured, but when my mother was still alive, when I’d go on TV, she would tell me, “Magsuklay ka naman.” The pressure is not there, although during events there is somebody who does my makeup, because I don’t know how to apply my own makeup.

But I refuse to spend so much time just beautifying myself. I have always been known to dress simply and I have never been used to being dolled up.

I do have a skin care regimen, but I am a late bloomer as far as skin care is concerned. I started to apply moisturizer regularly when I was in Congress. In fact I have a niece who is a dermatologist who reminds me to use sunblock all the time, and it was something I always forget.

How important is youth representation today?

Ever since I started my term in 2016, I have been and am still working with a lot of very young people. I think they’re the reasons programs are innovative, creative, out of the box. They contribute to a lot of the planning and conceptualizing of the programs.

Representation is very important, especially in governance. It allows us to listen to many diverse voices. I always push for empowerment, not just empowerment of the young, not just the empowerment of women, but of all sectors of society. The best programs are conceptualized when the ones who will be affected by government programs are not just consulted but listened to, given a seat at the table.

What is your advice for people who doubt a person’s capabilities based on gender?

That’s really our problem and I also faced this when I was running for vice president because I would get [comments] like, “She is not capable,” “She can’t do it because she’s a woman.” It’s a reality for many other women all over the country.

The reason many of the women empowerment programs of the OVP are focused on economic empowerment is that in the many years that I was lawyering for women who are victims of abuse, that is the reality.

I have a lot of frustrations about this. When we rescue a woman from abuse, at first she wants to file a case, but at the end of the day she will back out because she feels she cannot do it. Her feeling stems from the fact that she believes she cannot earn money on her own.

With many of our programs, we put a lot of emphasis on ensuring economic opportunities among women. We adjusted the programs to make sure that even if the mother has to take care of her child, she can earn money while doing so.

How different is Leni Robredo in 2016 from the person that she is now?

I would like to believe that I’m the same person, but I think that the difficulties of the last five-and-a-half years have definitely toughened me up.

The roadblocks that we encountered from Day 1 were really hard, but what kept us going was the fact that I was fully aware that I will be here only for six years. I had a mandate to fulfill, I was very determined not to let the difficulties get in the way of doing what we wanted to do.

I would not say that we were prepared for the difficulties. In the middle of the game we were thinking how we were able to hurdle the challenges—when I was booted out of the Cabinet, when the administration decided not to include me in any of the official functions of government.

Looking back, I do not have any regrets. When I finish my term I can look anybody straight in the eye and say I did my best. I did the best I could given the limitations that were given to me.

But having said that I have also discovered many good things, and No. 1 is that Filipinos are really inherently generous. We were able to do a lot of things because we were successful in collaborating with the private sector.