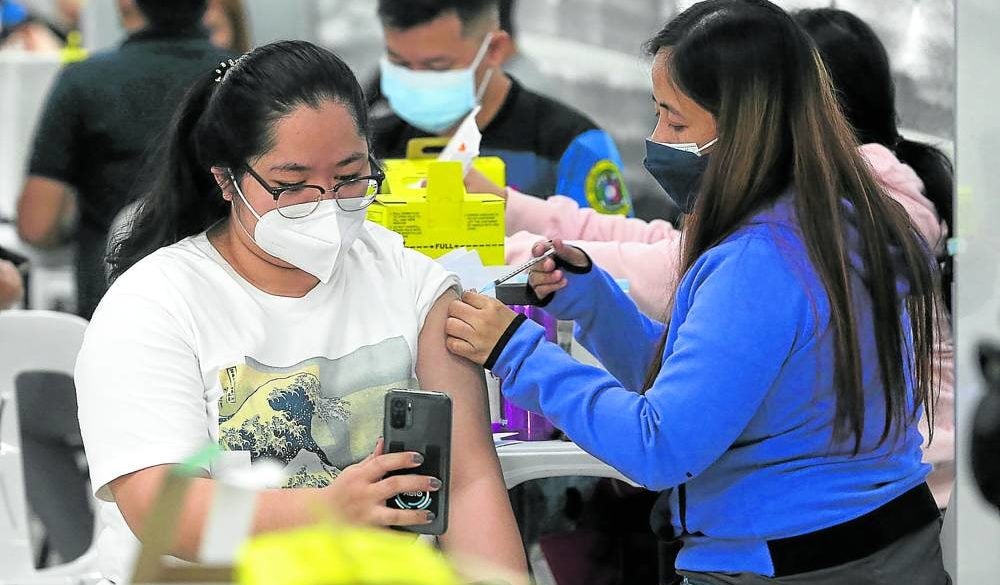 At the vaccination center in Marikina Sports Center on Jan. 4 —NIñO JESUS ORBETA

Last week, we discussed some possible pitfalls we may have fallen into in responding to the Omicron surge, causing widespread panic and anxiety, and possibly contributing to the surge.

First is the incongruous knee-jerk reactions with exaggerated responses akin to panic, leading to excessive purchases of medicines and health supplies. The government also had its share of the knee-jerk reaction with its conflicting directives of asking people to stay at home, yet mandating that they go to the nearest vaccination centers to get their boosters.

The discrimination against unvaccinated individuals made many of them troop to venues where they could get their jabs, creating chaos in some of these facilities and converting the mass vaccination into potential superspreader events.

When you have a positivity rate of close to 50 percent, that means the virus is abundantly present in a crowd, and there’s a strong possibility that the vaccinators themselves are already infected. Without them realizing it, they unwittingly share the virus with everyone they vaccinate.

This may likely be the reason some vaccination centers had to suspend operations because a big number of staff and volunteers had been infected. We’ve long proposed that we suspend mass vaccination in hotbed areas when there’s a massive infectious outbreak. It’s heartbreaking when Mother Nature has to step in to do it.

Second pitfall is the unnecessary health facility congestion experienced in some hospitals by confining mild COVID patients, which could very well be managed at home. In some instances, the patients were admitted per his or her request because of the feeling of “being safe” in a hospital.

Similarly, the emergency rooms were filled with mildly symptomatic patients seeking consultation, which could very well have been adequately managed with teleconsultation or publicly disseminated home-care treatment guidance. The hospitals could not turn them away anymore when they all go to the ER. That could have been prevented though, with good public health communication.

The third pitfall is again turning to the unvaccinated as the convenient excuse to employ draconian measures to manage the surge. Restriction of the mobility of the unvaccinated has been announced at the national and local levels, with conflicting reasons given by government spokespersons. One says the unvaccinated may be a public health threat, while another puts the reason as an empathetic desire to protect the unvaccinated from catching the virus and developing severe disease.

This third pitfall merits more discussion, as this may cause a complication much more serious than the disease.

We have been asked in several instances what we think of this directive of the Metro Manila Development Authority (MMDA) to restrict the movement of the unvaccinated.

They could only go out of their residences for essential errands, like buying food or medicines. They may be allowed to go to work but they have to comply with the regular nasopharyngeal swab requirement at their own expense. This is inconsistent with the rationale offered for this test, and is obviously just a tightening of the noose to force them to comply with the government mandate.

Some call it draconian; we say it’s draconianly misguided, and much as we’ve tried, we cannot see any rational basis for it other than compel everyone to get vaccinated.

Current best-available science on COVID-19 would be hard-pressed to produce an iota of hard evidence showing that the unvaccinated are causing or aggravating the pandemic. Since the Delta surge up to today’s Omicron variant, all evidence indicates that both the vaccinated and unvaccinated are on equal footing when it comes to the potential for spreading the virus. Examinations of the amount of virus they carry show practically equivalent proportions. So why discriminate?

In fact, as we discussed in a previous column, it’s a tenable argument that the vaccinated could be a possible spreader, more than the unvaccinated. (“Can the vaccinated become superspreaders?” Inquirer Lifestyle, 08/13/21)

The vaccinated have fewer symptoms, and many of them may be asymptomatic carriers. A good example is the balikbayan who skipped quarantine and infected a number of her friends in a party. We pity her because she’s being blamed for the current Omicron surge. Of course, that’s not exactly correct. It was just bad timing for her, but her reckless behavior is just one real-life reason the vaccinated can become superspreaders!

And obviously, our well-meaning mayors in the metropolis are enabling such behavior.

Many vaccinated individuals, including our own patients, have the impression that they’re already well protected from COVID-19 once they’re fully vaccinated, especially if they’re boosted. So, they tend to let their guard down, without realizing that they’re endangering others.

The unvaccinated are relatively more symptomatic when they catch the virus, so they get to isolate themselves immediately, unlike their asymptomatic or mildly symptomatic vaccinated counterparts who may shrug off their feeling of just being a bit under the weather, and unwittingly spread the virus around generously.

It would seem that our authorities have fallen into a deep obsession with vaccination because that’s what international health agencies, and renowned experts are recommending, although more credible and equally renowned experts say otherwise.

The ultimate goal is to get everyone vaccinated at all cost. It’s like the metaphor that for a hammer, everything looks like a nail, and everything it encounters has to be hammered down.

To any vaccine-obsessed manager of the pandemic, there’s no other solution to this pandemic but mass vaccination and repeated boosters.

Since early this year, when we started to roll out the mass vaccination program, we raised the scenario when the effectiveness of vaccines would wane and repeat booster doses have to be given every several months. We asked, how long could we sustain this—from a financial and logistic standpoint—even without considering the possibility that the vaccines are imposing suboptimal pressure on the virus, pressuring it to mutate into more infectious and possibly more virulent variants?

If mass vaccination and repeated boosting were beneficial to the pandemic, we should be much better off today compared to the same time last year. From a real-world population perspective, that’s how you assess the cost-effectiveness of any intervention.

You don’t have to be an epidemiologist to make the observation that the global situation has gone from bad to worse, and highly vaccinated countries appear to be having worse recurrent surges than some poorly vaccinated countries. And yet we insist on maintaining the same direction of management.

How can we expect to change the outcome when we keep on employing the same vaccine-centric strategy, which has miserably failed in the last 12 months that it was heavily used?

Since March, we’ve been recommending only a targeted or focused vaccination on the vulnerable sector—the elderly, immunosuppressed and those with comorbid diseases. We believed it would have been more cost-effective to focus on a holistic approach, including educating and assisting the public on how to build their natural immunity, and providing prevention and early treatment kits to prevent mild cases from getting worse.

If it’s any consolation, some countries are waking up to the reality that a vaccine-centric approach, aka mass vaccination and regular boosting, is not the best approach, and they’re limiting the boosting to their vulnerable sectors. It’s short of saying, we should have limited vaccination to the high-risk and vulnerable sector right from the start!

So, we really hope and pray that our health and other officials would take a pause and reevaluate their antipandemic strategies. We know they have sublime intentions to get us out of this pandemic, but they can’t keep on insisting to maintain a strategy that doesn’t seem able to achieve the primary purpose for which it was created—to prevent transmission or infection.

Reducing symptoms and severe disease is a good secondary benefit, but unless it’s able to achieve its primary objective, we’ll never see the end of this pandemic. And we’ll keep on blaming the unvaccinated for why the pandemic won’t go away.

The unvaccinated are already feeling so much disdain from the way friends and even relatives treat them (who says there’s no shaming of the unvaccinated?); the least the mayors could do is to not add to their repression by taking away their rights to go around responsibly.

As we forecast, this Omicron surge will be over soon, just as quickly as it hit us from behind. We’re already peaking in Metro Manila and nearby areas, and in another four weeks, we should be down to very safe levels.

We said that Japan, Indonesia, India and the Philippines will not be as badly hit as highly vaccinated countries like Israel, the United Kingdom and the United States. We maintain that forecast, provided we don’t keep on dropping the ball or worse, passing it to the enemy with decisions that fuel, rather than control, the surge.

The good news, though, is that recovery from Omicron will happen even with wrong decisions being made. It will just be delayed by a few weeks. But the deep wounds that the misguided decisions could inflict on the national psyche may take a much longer time to heal.