How these women train for a Marathon | Inquirer Lifestyle ❮ ❯ 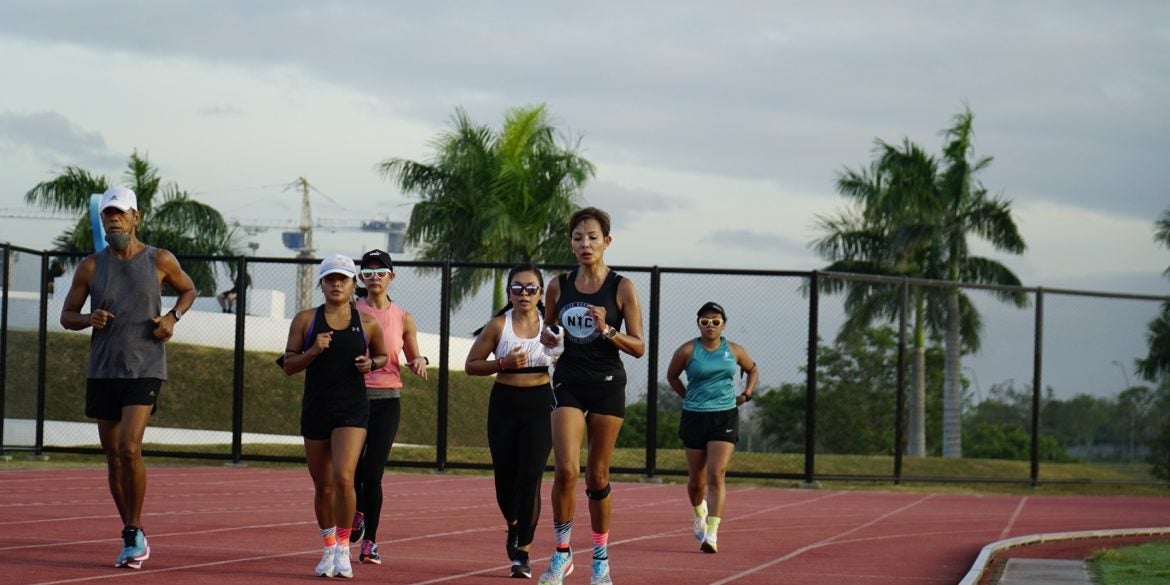 How these women train for a Marathon

If there’s one thing the pandemic made many people realize, it’s that the freedom to move around unhampered was one that was taken for granted. At the height of the lockdowns when exercising outdoors was limited to a small radius relative to one’s home, runners like Angie Limbaco had to content themselves with sprinting up and down multiple flights of stairs in their condo.

The public relations practitioner is also a long-distance runner who has joined and completed a number of international marathons. Pre-pandemic, her running coach, Ken Mendola (Instagram: ken_mendola), prepared her for the grueling task of completing a full, 42-km marathon.

Once restrictions were loosened, Limbaco started again running twice weekly with Mendola; the rest of the week she runs solo around her Makati neighborhood. All of this is in preparation for the London marathon scheduled later this year and which she has set her sights on completing.

The interest in running as a sport is one that continues to grow. Mendola now trains lawyers, professionals and even a female Quezon City police station commander. All of them willingly make the trek to Westgate in Alabang before dawn on Sundays for long-distance training with their coach.

During one gray, rainy Sunday morning last month, the group ran around the empty streets solo, in pairs or trios. Their moisture-wicking neon singlets, racer-back tops and shorts were no match for the steady downpour. Despite this, they seemed determined to complete the circuit set by Mendola. Every so often, they would glance at their waterproof watches.

From coaching a couple of runners emerging after the mid-year lockdown, he now trains dozens, twice a week. The runners are divided into two groups with the first meeting on Wednesdays and the second, on Thursdays.

“We run short distances on weekdays. These are speed runs. Long distance runs are on Sundays and everyone participates. It takes 10 to 12 weeks of training before a runner is deemed ready for a 10-kilometer marathon. Their goal is to complete the 10K in under an hour. Now, half of them can do it in less than 50 minutes,” Mendola said.

Lawyer Estrella “Star” Elamparo is a long-time runner and has completed four of the six “world majors” including the ones in Tokyo, Berlin, Chicago and London. She’s training now for the London marathon later this year, and has set her sights on the Boston marathon to be held in 2023.

“I like training with Coach Ken because he’s very tutok (hands on) and comes up with structured individual training plans,” Elamparo said. “What I really like about the sport is that I’m not competing anyone. When I’m running, my aim is always to improve.”

People who are considering taking up running often list improved health as one of their goals. Mendola is all for it but first has to determine the person’s fitness level and their willingness to train. “I ask them what days they are willing to run. Then we work from there,” he said.

Camille Aromas, head of legal at Huawei, only started running early last year. “I wanted to do it correctly so I needed the help of a professional,” Aromas said.

She took to it fairly quickly and was even able to join the Paris marathon last year. Despite her hectic shchedule, she carved out pockets of time to train five to six times a week, and last October—with the permission of her boss at Huawei who also happens to be a marathon runner—she completed the Paris marathon.

“I really just wanted to break the monotony of my pandemic routine but I also wanted to be the best runner I could possibly be. My friends are so surprised when they see me because I used to be so lazy; I only liked to party and drink.

“Now I’m not as uptight and angry when I’m at the office. I chalk it all up to the endorphins. Running makes me feel good,” Aromas said.

For Imelda “Inday Hepe” Reyes, running is also her stress reliever. She completed her first full marathon in her 40s.

“I wanted to run a 42K when I turned 42,” Reyes said. She signed up for the Bull Run now known as the Dream Marathon, but as early as 1998, she was already running to keep herself in tiptop shape for her job on the police force. She is now station commander at the Anonas police station in Quezon City. Last November, she joined in and completed virtually the New York marathon.

“I try to run three or four times a week, and am targeting to join the next Chicago marathon.

“Running for me is a way to release stress. It’s an escape from the real world for at least a few hours,” Reyes said.

From the Ground Up: How we pushed through 2021 and built ourselves again by finding new sources of happiness

Mix ‘n Match with KFC’s ‘Your Combo. Your Zinger.’