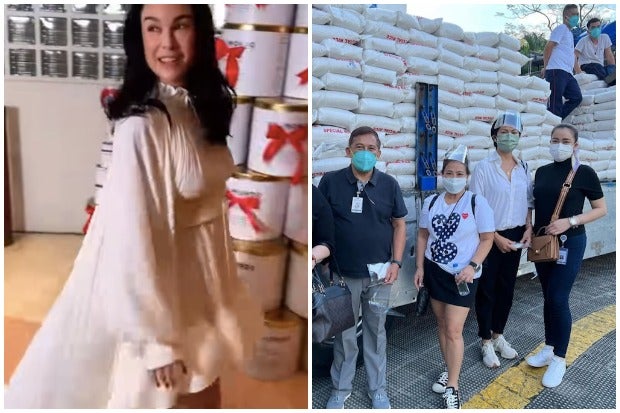 After giving sacks of rice to the medical frontliners of San Lazaro Hospital last Friday, and those of St. Luke’s Global in Taguig City last Sunday, actress Gretchen Barretto is set to distribute truckloads of sacks of rice at the Philippine General Hospital today, Jan. 25.

“All employees and medical frontliners will also receive a sack of rice. Total of 1,800 na sako ng special rice ang aming ipamamahagi,” Francis Simeon, Barretto’s assistant, said in an exclusive interview. (A total of 1,800 sacks of special rice will be distributed.)

Dr. Cherry Abrenica, a resident doctor of San Lazaro hospital who has become a friend of Barretto, was moved by the actress’ gesture that she had an image of San Lazaro be made as a token of gratitude to the actress.

Barretto distributed 1,328 sacks of rice to the healthcare workers of San Lazaro. Present during the distribution was Barretto’s best friend Grace Medina.

In another gift-giving event at St. Luke’s Global in Taguig City, Barretto and her group composed of Medina, Rusky Fernandez, and former actress and businesswoman Ana Abiera, shared 3,406 sacks of rice. Beneficiaries were employees of the said hospital, including the maintenance and security personnel, together with the medical frontliners.

Barretto was apparently returning the favor as her mom Inday Barretto and her siblings were confined at the said hospital when they caught COVID-19.

In the succeeding days, Barretto will distribute sacks of rice to St. Luke’s Hospital and National Children’s Hospital, both in Quezon City, and at the National Center for Mental Health in Mandaluyong City. JB

Gretchen Barretto reunites with family at dad’s wake, is joined by Duterte