Could this year’s Edsa celebration be the last? | Lifestyle.INQ ❮ ❯ 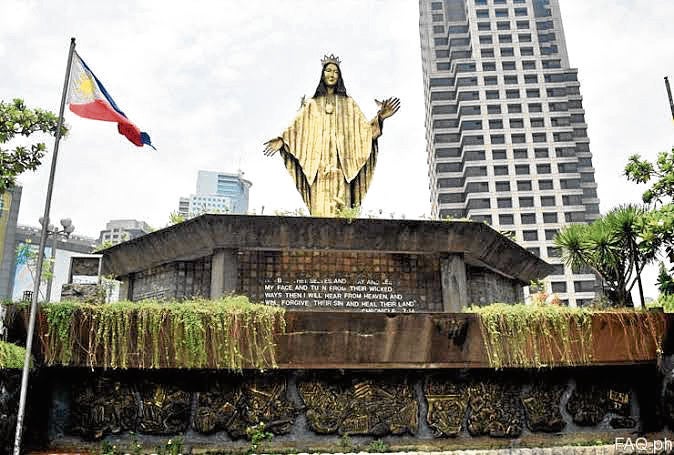 The Edsa Shrine, the site of the peaceful People Power Revolution which restored democracy in our country

Could this year’s Edsa celebration be the last?

I’m writing this piece early—one month before the next Edsa anniversary on Feb. 25—to give ample time for those who still understand and appreciate its significance in our nation’s life to take the opportunity to prepare for a truly meaningful public celebration. This may be our last chance, and that is no exaggeration because all those historical monuments, remembrances and records of our people’s long struggle and ultimate victory in restoring democracy in our land are in danger of being obliterated, contradicted or twisted beyond recognition, depending on who emerges the winner in this May’s presidential election.

The unabated distortion of our country’s historical truths has been a well-planned process which started years ago, spreading uncensored and uncorrected in social media sites, propagated by mercenary influencers of public opinion and their troll minions. The cumulative pernicious effect of this undermining activity is the almost total misunderstanding or contrary perception by many of today’s young Filipinos, mostly millennials, of national events which occurred before they were born or in their early childhood.

Just one glaring example among many: If you go to Google and search for the “Top 10 Best Philippine Presidents,” the very first link you will see is from a site called The Top Tens (thetoptens.com).

No. 1 on the list is Ferdinand Marcos, the only president and dictator who was ever ousted from office by his own countrymen. His ignominious downfall is the reason for a special national holiday commemorating the Edsa People Power Revolution. The main historical monument of this landmark event is the Edsa Shrine, also known as the Shrine of Mary, Queen of Peace, Our Lady of Edsa. (The Edsa phenomenon was unique in that it was miraculously bloodless, the most peaceful people-led transition from authoritarian rule back to democracy).

Declared as Important Cultural Property by the National Commission for Culture and the Arts, the Edsa Shrine will surely be consigned to oblivion if the ousted dictator’s son, who insists that his father’s rejected rule was our country’s “golden age,” manages to retake our country’s leadership.

Supporting the “golden age” myth under the dictator while disparaging his successor, one of the leading comments in the previously mentioned website states: “In his time our economy was very progressive. . . In 1986 the Philippines’ downfall started. It became poor thanks to a housewife with no political experience being the Filipino president . . . Marcos should be recognized as the Philippines’ greatest president.”The list of disinformation and outright lies extolling the dictator and his martial rule goes on and on. And this is only one of many sites that have been flourishing unchecked in social media for many years now. Obviously, these artificial intelligence-assisted “for hire” entities have done a much better job convincing today’s generation than official sites which contain factual but drab historical content.

So who can we hold responsible for the prevailing gross misconception by today’s generation of what martial law was really like for those of us who experienced it first hand?

I would lay the blame squarely on our generation, more precisely the Baby Boomers who were somewhere in their 20s to 40s during Edsa in 1986, now in their late 50s to 70s. Looking back, I had actually anticipated, probably intuitively, the ironic situation in which we find ourselves today.

Let me quote a somewhat lengthy but key passage from an article I wrote a few years ago, titled, “Instilling the Value of History in the Young”: “Because of their propensity to visit innumerable sites on the internet, today’s young people are exposed to countless tweets, blogs (text) and vlogs (videos) on practically any subject or issue. Many of these messages come with an agenda, either personal, advocacy-inspired or paid for by special interest groups. These messages usually sound convincing, making it difficult to glean what is true from the merely specious or the outright false, specially in matters of national importance.

“Here is where we, as parents or grandparents of the next generations, or even just as concerned elders, come in. We are the front-liners, even before the school or the media, in guiding the youth in the pursuit of truth. We cannot escape responsibility for this role.

“This is specially true when it comes to our recent history, particularly regarding events which we have witnessed or of which we have had firsthand experience. We must resolutely resist all attempts to distort history for the purpose of mitigating abuses perpetrated against our countrymen or exonerating those guilty of these acts. I am talking of course about the terrible atrocities and unabashed plunder committed during the long era of the dictatorship.”

In an effort to make up for any shortcoming on my part, I celebrated my milestone 75th birthday (which coincided with the 30th anniversary of Edsa), not by throwing a party but by gathering my many grandchildren for a “teach-in” about what happened to our country during martial law.

When I asked what they were taught about martial law in their schools, I was dismayed when they said they learned about it in a general way, without emphasis on the lessons we had learned from it. I wondered about the many other young people whose parents never bothered to talk to them about this dark period in our history.

Today, we are faced with the looming consequences of our generation’s neglect, because whenever a vacuum is created, vested interests rush in to fill it with their self-serving agenda. Now there is precious little time to make up for years of apathy. More particularly, today’s situation puts into question the policies and practices of our educational system and its leaders in relation to Edsa.

I recall an interview of a top education official in which she justified the way in which martial law was taught by saying it was good to present both sides of every issue, and that included presenting both the good and the bad aspects of martial law. I was shocked!

Whatever happened to our country’s commitment to democracy and its institutions? To begin with, the imposition of martial law itself was not even justified, not to mention the brazen wholesale and illegal arrest and imprisonment of opposition figures, journalists, lawyers and activists critical of the administration.

In the situation we face today, where the late dictator’s son is aiming for his father’s former position, it is claimed that a son is not responsible for his father’s sins. But this is true only insofar as he does not justify or approve of them, and takes steps to make appropriate restitution (at the very least financially by voluntarily returning officially recorded ill-gotten wealth) to the people who have suffered due to his father’s acts, which is all Filipinos of this generation.

But if the son’s expressed view is that the Philippines basked in a “golden age” under his father’s oppressive and kleptocratic rule, what is to prevent him from expunging all the visible reminders which attest permanently to the Filipino people’s rejection of his father?

Realistically, if the son ever ascends to power, what lies in store for the People Power Shrine on Edsa? What about the Bantayog ng mga Bayani in the heart of Quezon City and its Wall of Remembrance, where the names of hundreds of martial law victims, martyrs and heroes are enshrined to be honored by all future generations? What about the Ninoy Aquino International Airport and the other sites honoring prominent martial law heroes?

Last and most important, what will happen to our annual celebration of People Power, the event which in 1986 made the Philippines the toast of the free world and the model for the many nonviolent democratic movements in other countries that followed? Let us not shamefully lose our unique place which that event has given us in world history.