COVID didn’t happen to us, but for us | Lifestyle.INQ ❮ ❯ 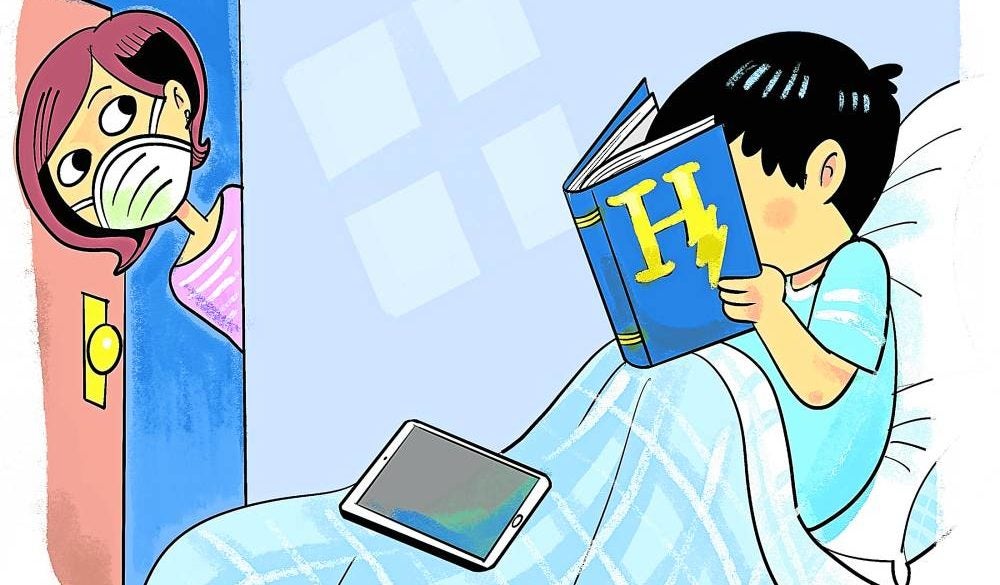 COVID didn’t happen to us, but for us

During nighttime prayers, my kids and I take turns going through adoration, contrition, thanksgiving and supplication. Snuggling in the dark, we share how we felt that day and model taking turns and listening.

Because our days cooped up at home can get repetitive, so can our prayers. Once, I pointed out to my 11-year-old Jack that his supplication was a bit self-centered. He grumbled and hastily added something about the poor.

As I was about to launch into a tirade about how great he has it compared to most, I realized I couldn’t expect him to really know.

When my son tested positive for COVID-19, we had to isolate him in the room he shares with his sister.

As the primary caregiver, I was the only one going in and out to serve him his meals and attend to his needs. What was toughest was seeing him cry himself to sleep on the first night, saying he just wanted to be hugged.

I equipped him with a walkie-talkie so he could communicate with us and he had iPad time till it would lose its charge. I supplied him with a revolving assortment of books and activity pads so he wouldn’t get bored. I was pleasantly surprised to see him plow through the first four books of Harry Potter, sometimes even choosing to continue reading even with the iPad within his reach.

“Wow, you’re choosing Harry over chatting with your friends,” I remarked.

“I don’t have any friends,” he replied, showing me his sad chats looking for company but finding none.

He explained that in his circles, it seems that only if you played certain games would they want to play or talk with you.

It was then that I remembered: “It didn’t happen to you; it happened for you.”

Googling the quote led me to pages alluding it to Jim Carrey, but the lesson of seeing the blessing in the hardship was the point I hoped to drive home. It was rare for my son to have so much quiet time to reflect or even just nap, being the sort to always chase stimulation all day. He was, in a way, in detox.

Things got more difficult when our helpers eventually got sick, too. We were running out of places to isolate, so my husband moved to his mother’s house, as he had to stay well for an upcoming flight for work. Days later, my 6-year-old Juno contracted fever but was otherwise normal and active.

In a pandemic, exposing yourself to people or cultures unlike you or your family is challenging. Growing up with instant-gratification-everything is so pervasive.

But films or books with characters different from you is still accessible. Fiction, especially, allows readers to explore and take into account what narrators think or really feel inside that isn’t outwardly obvious.

I learned about that at length at a film and literature course at university, so I rolled out the junior version at home.

Once out of isolation (but still in quarantine), we watched the first few Harry Potter movies and compared them with the books. Jack decided to pause reading the fifth, as it was getting too dark for him.

But now, he has a better appreciation of Harry living under the stairs apart from the family, or feeling left out, because he’s had similar experiences, too.

We discussed it, with the ever-observant Juno absorbing everything, and I told Jack I could also relate, sharing similar events from my past.

The other silver lining is Jack’s asthma. While it worried me that my children haven’t been vaccinated for COVID-19 yet, and my son has a comorbidity, the experience I’ve had managing his flare-ups made me calm during this crisis. Those years trained me to always have medicine and his nebulizer on standby, so I didn’t have to panic.

It helped that I had just watched a video of Jack’s allergologist Dr. Marysia Recto, who educated the audience about how a virus works, how it goes away on its own, and managed expectations on how long symptoms usually last. Interestingly, she didn’t say anything different from what she normally advised us pre-COVID.

Invaluable was the children’s pediatrician, Dr. Jose Clemente, who still managed to reply to messages despite being inundated with requests from patients. His steady guidance gave us the confidence to do home care.

We were supposed to get our boosters during this time. Our helpers were vaccinated with Moderna and Pfizer, but they still got fever, cough and colds. I got Sinovac-CoronaVac, but was the last one standing, so I was somehow able to care for everyone. Still, I am grateful for the help from family and friends who prayed for our household’s recovery and sent home-cooked vegan meals and fresh fruits.

COVID-19 didn’t happen to us; it happened for us to compel us to find the good in any situation. —CONTRIBUTED INQ