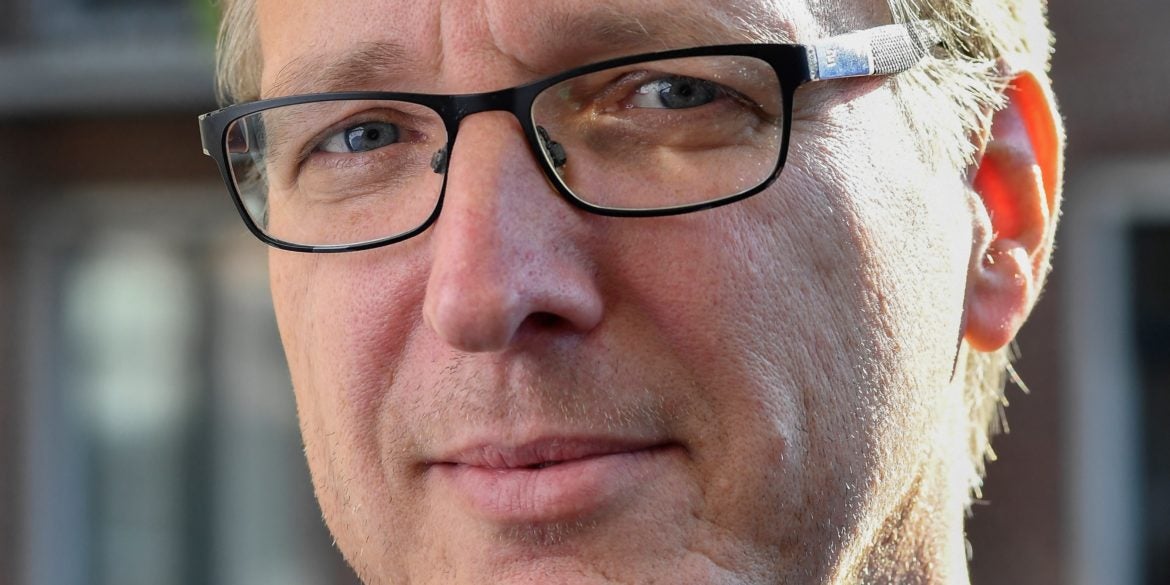 Arthur Brand, also dubbed the "Indiana Jones of the Art World", poses at his apartment in Amsterdam on October 30, 2019. - A golden ring once given as a present by the famed Irish writer Oscar Wilde has been recovered by a Dutch "art detective" nearly 20 years after it was stolen from Britain's Oxford University. The friendship ring, a joint gift from Wilde to a fellow student in 1876, was taken during a burglary in 2002 at Magdalen College, where the legendary dandy studied. At the time it was valued at GBP 35,000 (40,650 euros, USD 45,000). The trinket's whereabouts remained a mystery for years and there were fears that the ring -- shaped like a belt and buckle and made from 18-carat gold -- had even been melted down. But Arthur Brand, a Dutchman dubbed the "Indiana Jones of the Art World" for recovering a series of high-profile stolen artworks, used his underworld connections to finally find it. (Photo by JOHN THYS / AFP)

Amsterdam, Netherlands — A Dutch art detective has returned a rare Roman statue that was considered one of France’s most important treasures to the museum from which it was stolen nearly 50 years ago.

Arthur Brand, dubbed the “Indiana Jones of the Art World” for his exploits, handed back the 1st-century bronze sculpture statue of the god Bacchus to the director of the Musee du Pays Chatillonnais in eastern France.

It was from there on a cold evening in December 1973 that thieves smashed a window, crawled through the bars and pilfered the 40 centimetres (15.7 inches) statue of the god of wine.

“The criminals made off with some Roman antiquities, around 5,000 Roman coins – but more importantly, the bronze statue of Bacchus as a child,” Brand told AFP.

“The loss to the museum and the community was enormous. One of their most precious antiquities has been stolen,” said Brand, moments before handing back the statute in a ceremony at an Amsterdam hotel.

“Because back then there was no proper catalogue for stolen art, the statue disappeared into the underworld and was thought to have been lost forever.”

The director of the museum – famed for its collection of Roman artefacts from the nearby archaeological dig site of Vertillum, an ancient Gallo-Roman village first excavated in 1846 – said it was an emotional moment.

“When I saw it now for the first time, I just realized how much more beautiful it is than the copy we have had on display” since the original was stolen, Catherine Monnet told AFP.

The statue resurfaced through sheer chance two years ago when an Austrian client contacted Brand, whose previous finds include a Picasso painting and “Hitler’s Horses,” sculptures that once stood outside the Nazi leader’s Berlin chancellery.

The client asked the Dutchman to investigate a statue of a little boy he bought legally on the art circuit.

“When we could find no reference for such an important work existing anywhere, we realized that the work could have been stolen – and the hunt to find out what it is was on,” said Brand.

After months of sleuthing, an obscure entry in a 1927 edition of a French archaeological magazine finally revealed a clue: the sculpture depicts Bacchus as a child and belonged to a French museum.

Further enquiries with French police revealed it was stolen on December 19, 1973, according to an official police report of which AFP has seen a copy.

“This means we had to make a deal. The Austrian collector bought it legally on the open market where it had probably been sold more than once over the last few decades,” the detective said.

Furthermore, the statute of limitations in France was five years, meaning that no criminal case could be opened, Brand said.

“But the owner was shocked to learn that the piece had been stolen and wanted to give it back to the museum. Under French law, he had to be paid a small amount – a fraction of the statue’s price which could be millions of euros – for ‘safekeeping’,” Brand said.

Brand tapped into his extensive network, and two British art collectors, Brett and Aaron Hammond, sponsored half of the amount, while Chatillon’s council paid the other of the undisclosed sum of money.

“After 50 years, it’s extremely rare for a stolen object to surface. Especially such an important one, that’s now going back to the museum where it belongs,” Brand said.

Museum director Monnet was delighted to have the sculpture back.

“This is a particularly important art piece because they are so rare and of such great quality,” she said.

The statue was discovered by archaeologists in 1894 during a dig at the Vertillum site, already declared a historical monument two decades prior.

In 1937, the Bacchus statue formed part of an exhibition in Paris consisting of what was regarded as the 50 most beautiful art treasures of France, Monnet said.

“This just tells you how important this piece of art is as a part of France’s heritage,” she said.

“As for Arthur – he has free entrance to the museum for life,” a beaming Monnet added.

‘I am not an object,’ says French artist’s Blue Woman
Sale of rare Leonardo drawing triggers legal battle in France
Abandoned casts of Angkor Wat treasures come out of hiding