Dressing for the job: The presidential candidates

With the official campaign period for this year’s national elections starting on Feb. 8, the presidential aspirants will be busy traveling the length and breadth of the archipelago to connect with voters. It’s a grueling task that will entail long hours on the road, allowing only for quick naps on the go.

If what they wore for their recent interviews with GMA’s Jessica Soho and ABS-CBN’s Boy Abunda are any indication of how they will present themselves during the campaign period, we can expect comfort and approachability to be buzzwords.

Even before she announced her decision to run for president, Vice President Leni Robredo has been partial to round-neck tops with short sleeves that reach her elbow or extend a few inches from the elbow. By now magenta pink is inextricably linked to her, but she has worn tops in different shades of pink.

Robredo wears these tops with dark trousers with a slight flare at the hem, and sensible shoes that allow her to stand for long periods of time. Her shoulder-grazing hair is often worn loose as she did during both interviews. 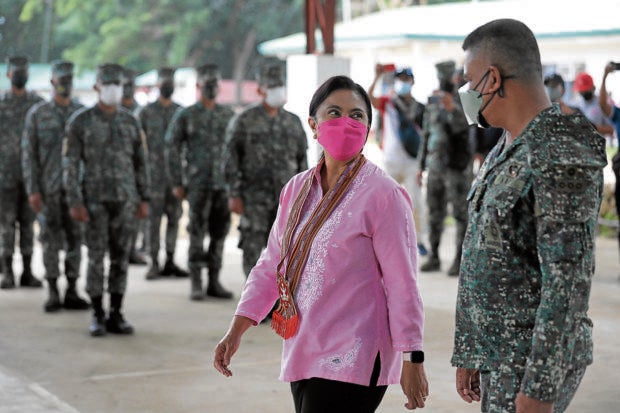 Rhett Eala is one of the designers who has made tops for Robredo in the past and said that she is partial to two particular styles of his.

“They’re very similar in that they’re both round-neck shirts with short sleeves. The only differences are, one, the Luna has a keyhole detail in front and embroidered patterns, while the second has painted-on details,” Eala told Lifestyle.

He recalled that on the afternoon before her announcement last October, he was asked to make a blue top which she wore the following day. By then he had already made several pink tops and was surprised she wanted a blue one.

Eala recently took Robredo’s measurements after he was asked to make new ones that were less prone to wrinkling. “Pure linen tends to wrinkle quickly so I’m doing ones that travel well. She said she wanted some that didn’t look too formal. She really feels comfortable in the two styles I’ve made for her.”

Designer JC Buendia recently came from a fitting with the Vice President and said he would be making three pink cotton-blend tops for the campaign that will incorporate woven fabric from the north.

“I will be lengthening the sleeves a bit and relaxing the fit,” said Buendia, who is known for his tailored looks. “She said that since she would be using them for entire days during the campaign trail, she wanted the tops to be more relaxed.”

Taking a page from dad’s book

“Whoever dressed them was aware that Collezione is a 50-year-old, Filipino-owned heritage brand with an instantly recognizable key-shaped logo,” Buendia said. It’s certainly something he would notice, as the designer once collaborated with Collezione on a collection that included embroidered sampaguita (jasmine) blossoms on plain polo shirts.

Incidentally, Eala also worked with Collezione and is credited for popularizing the polo shirts with the Philippine map embroidered on the left chest worn by late President Benigno “Noynoy” Aquino III during his campaign.

In the interview with Abunda, Marcos wore an unlined zippered jacket over a white collarless T-shirt and dark pants, a look that seemed to mirror the one worn by the host. Marcos’ hair was neatly combed and parted on the left. He might still end up taking a page from his father’s book, as Marcos Sr. was known for the shirt-jac (shirt jacket) barong uniform he wore in the ’60s.

Sen. Manny Pacquiao is the one who turned up in customized shirt-jacs for both presidential interviews. The blue short-sleeved button-down shirts featured a stylized Philippine flag running the length of the collar, and contrast-color button tabs on the sleeves. Embroidered on the chest pocket was a cube logo with his initials “MP.”

Buendia said the shirt-jac can “provide the illusion of height as long as it is properly fitted and rests on the hips.” The billionaire boxer’s shirts were obviously fitted on him as the shoulder seams were perfectly lined. 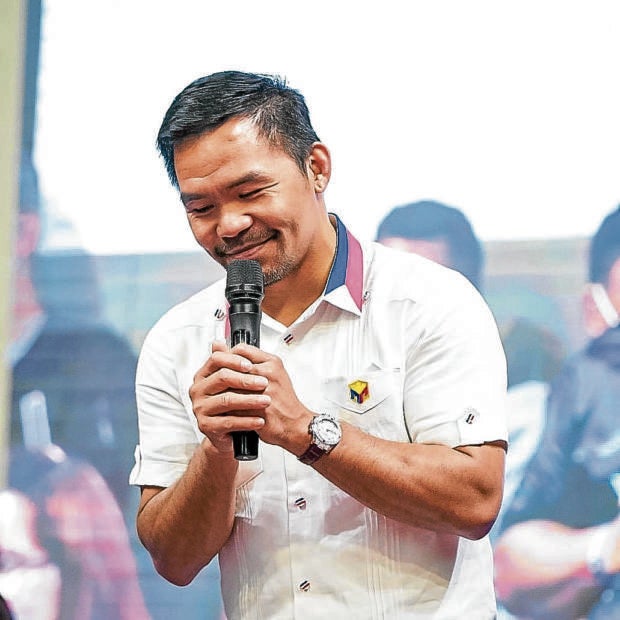 “They’re like an alternative to the guayabera, the barong-like button-down short-sleeved shirt worn by men in Cuba. I’ve had numerous clients before who would shift to having shirt-jacs made once they were in public office,” the designer said.

Like Pacquiao, Manila Mayor Francisco “Isko Moreno” Domagoso wore almost the same outfit for both presidential interviews. The bespectacled Domagoso wore a light blue long-sleeved shirt with the sleeves carefully folded just below the elbows, and tucked into fitted denim jeans. On his feet, pristine white Adidas sneakers. On one wrist he sported a braided leather bracelet while on the other, he wore his Apple Watch with a vivid rainbow strap. 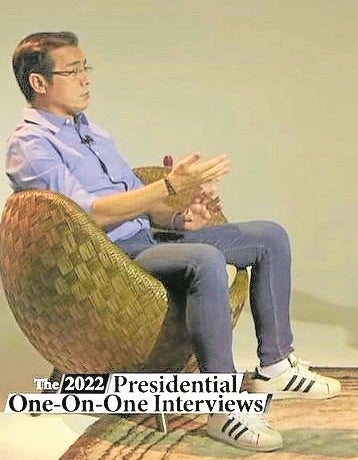 As the youngest candidate, Domagoso is comfortable wearing the barong Tagalog in an official capacity but can also carry off more casual looks—like he did both times—that might appeal to voters.

The rolled-up sleeves signify a willingness to get down to work, the utilitarian denims and sneakers make him relatable to the masses, and the rainbow strap is an obvious wink to the LGBT community—though, ironically, like Pacquiao, Domagoso said in the Soho interview that same-sex marriage shouldn’t be allowed.

The denim-and-sneakers combo is a tack Sen. Panfilo Lacson also seems to have taken. He traded the immaculate button-down long-sleeved shirt he wore for the Soho interview, for a look with a decidedly much younger vibe in the second interview: a light blue polo shirt with white collar and cuffs, blue denims, and a pair of Nike Air Jordan sneakers in the exact shade of blue as his shirt.

“In the days and weeks leading up to the elections, candidates have to be at their most relatable so they can connect with ordinary Filipinos,” said Bench stylist Noel Manapat.

It remains to be seen if Lacson’s gamble worked, but one thing’s for sure: it was certainly different. What he didn’t change, however, was the wet look style of his hair that was combed and parted on one side. His long-time barber Dhon Santiago said that he has been cutting the senator’s hair for the past five years.

“He used to go to a Korean stylist but they didn’t seem to understand one another,” said Santiago, who works in a salon in Muntinlupa City. “I only used to cut his son Jay’s hair, but he tried me out and liked the cut I gave. I sometimes suggest ways for the senator to style his hair, but he usually asks for the same cut.”

It might seem frivolous to train our sights on the candidates’ clothes during an election as important as this, but as New York Times fashion director Vanessa Friedman wrote in 2020, “We make instant judgments about one another based on the images we see. It’s human instinct and part of how we decide if someone is likable or believable as a leader—whatever their gender.” INQ