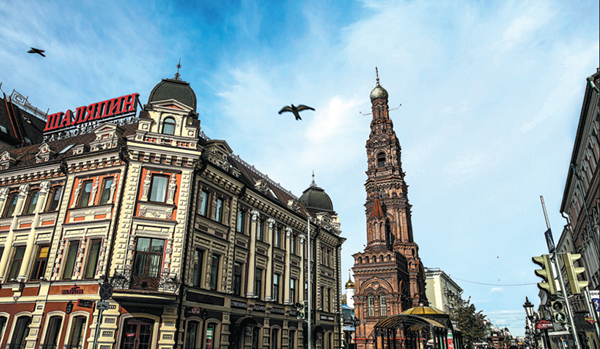 Elegant Russian architecture makes the streets of Kazan a joy for strolling.[Photo provided to China Daily]

Lunch in Asia and dinner in Europe? Russian jewel shines for continent-hoppers

KAZAN, Russia — If you’re thinking of a trip to Russia and want to venture beyond the well-trodden tourists spots of Moscow, St. Petersburg or Sochi, the city of Kazan might just fit the bill.

Some 725 kilometers east of Moscow, Kazan is called the Istanbul of the Volga River for its setting as a place where Europe meets Asia. It’s as if each of the continents can peer into the other, all the better from the tops of church belfries and minarets. The fact that the city’s name means “cooking pot” in the Tatar language adds to the allure.

In existence for a millennium, the city is about 150 years older than the Russian capital. Kazan is the capital of the Tatarstan Republic-the land of the Volga Tatars, a Turkic people commonly associated with Genghis Khan and the hordes of warriors that crossed the Eurasian landmass with him.

Slavic Russians make up about half the population, and this cultural mix of Slavic and Tatar cultures makes Kazan an all-the-more-interesting city.

Kazan offers perhaps the clearest illustration of Russia’s identity as a transcontinental, multiethnic country straddling Europe and Asia. And for tourists, Kazan is a glorious city that also represents Russia’s Czarist past. With its imposing palaces, towering church spires, and thriving cultural scene, Kazan is a pure Russian city that boasts incredible beauty and a heart beating with vitality.

Even if you visit the city in the middle of summer, you will be delighted to discover it is far less crowded than Moscow and St. Petersburg. Kazan is the sixth-largest city in Russia. Nearly half of its residents are ethnic Tatars, so a visit allows you to experience the unique foods and traditions of Tatar culture. For those looking to explore more of Russia, you’ll find rich rewards in the Tatar culture, impressive architecture and tranquil parks that make Kazan worthy of a visit.

According to one story, the city was founded more than 1,000 years ago as the northern outpost of what was then known as Volga Bulgaria. As a prosperous trading state, Volga Bulgaria’s convenient location on the Great Volga Route allowed it to trade with the countries of Scandinavia and its southern neighbors. At the time, the city of Bulgar was the largest in Europe.

The 13th and 14th centuries were a time of rapid growth for Kazan. The production of earthenware, leather goods and weapons took hold, and due to its location at the intersection of several trade routes, trade relations developed with the West and the East, and to the North and the South.

In 1438, Kazan became the capital of the Khanate of Kazan. In 1552, the city was captured by Ivan the Terrible and became part of Russia. The city was seized and largely destroyed during a period known as Pugachev’s Rebellion of 1773-75, but was later rebuilt during the reign of Catherine the Great. In the following centuries, Kazan grew to become a major industrial, cultural and religious center of Russia.

Ivan’s victory served as Russia’s final stand against the Tatars, and the Siege of Kazan, as it came to be known, set the stage for Russia’s expansion eastward into Siberia and Central Asia and westward into Europe. This, in turn, served as the catalyst for what would eventually turn the proto-state of the Grand Duchy of Muscovy under Ivan into the Russian Empire centuries later.

Yet, as the imperial Russia of the Romanov family dynasty continued to expand and joined the table of the premier colonial powers of Europe, it never fully fit in with its Western peers. This was because, unlike the distant, overseas empires of countries like Britain or France, Russia’s empire was contiguous, spanning the plains, steppes and mountains of the vast Eurasian landmass.

Russia’s expansion brought with it an incorporation of cultures and political traditions to a greater extent than that managed by the powers of Western Europe. As a result, Kazan is renowned for its vibrant mix of Tatar and Russian cultures. In 2021, more than 3 million tourists visited the city, and the Kazan Kremlin remains the main point of attraction for tourists, official data showed.

The interplay between East and West serves as a crucial part of Russia’s identity in the modern era. Indeed, Kazan is one of the most diverse cities in Russia, with its population of over 1.2 million people evenly split between ethnic Russians (48.6 percent) and ethnic Tatars (47.6 percent). When strolling through the city’s streets, the Tatar and Russian languages can be heard in roughly equal measure, and Kazan’s architecture mixes Eastern and Western styles throughout the city.

Nowhere is this diversity clearer than in the grounds of the Kazan Kremlin (there are multiple kremlins in Russia; the term simply refers to a fortified central complex, dozens of which can be found in cities across the country).

The Kremlin includes many historical buildings, the oldest of which is the Annunciation Cathedral (1554-62), the only 16th-century Russian church to have six piers and five apses. Like many of Kazan’s buildings of the period, it is constructed of local pale sandstone rather than of brick.

The most conspicuous landmark within the Kazan Kremlin is the leaning Soyumbike watch tower, which is thought to date to the reign of Peter the Great. A well-known legend connects the tower with the last queen of the Khanate of Kazan.

Another recognizable architectural feature is the Spasskaya Tower, which anchors the southern end of the Kremlin and serves as the main entrance to the complex.

Also of interest are the snow-white towers and walls, erected in the 16th and 17th centuries but later renovated, and the Governor’s House (1843-53), now the Palace of the President of the Republic of Tatarstan. The palace is believed to be located on the site of what had been a palace built by a khan-the historical title in the region for a ruler. Tucked between the presidential palace and Soyumbike watch tower is the palace church built on the foundations of a medieval mosque.

The Northern wall of the Kremlin contains another gated tower, the Secret Tower, so named because it used to house a secret well for water supply. This tower allows pedestrian access to the Kremlin, but vehicles are restricted to emergencies only.

The Kazan Kremlin became a UNESCO World Heritage Site in 2000 and is among the most visited attractions in Russia. It is free to visit, though some of the buildings within the walls do charge an admission fee.

Alongside the Kremlin’s administration buildings and the Orthodox Annunciation Cathedral stands the Kul Sharif Mosque, with its facade of white tiles, turquoise dome, and four piercing minarets.

Originally, the mosque was built in the Kazan Kremlin in the 16th century. It was named after Kul Sharif, a religious scholar who served there.

Kul Sharif died with his numerous students while defending Kazan from Russian forces in 1552. It is believed that the building featured minarets, both in the form of cupolas and tents.

Its design was traditional for Volga Bulgaria, although elements of early Renaissance and Ottoman architecture could have been used as well. In 1552, during the Siege of Kazan, it was destroyed by Ivan.

Inaugurated in 2005 with the help of Saudi Arabia and the United Arab Emirates, the rebuilt Kul Sharif is the largest mosque in Europe outside Istanbul. It is a testament to the long roots of Islam’s influence in Russia and its coexistence with Orthodoxy, having been rebuilt four centuries after the original mosque was burned down during Ivan’s conquest.

As for how long you need to set aside for a visit to the Kremlin, it depends on your travel style and interests. Usually, a couple of hours will suffice. Visitors of any faith can enter the Kul Sharif Mosque as long as they wear appropriate clothing.

Outside the Kremlin’s grounds, there are many other attractions that illustrate Kazan’s status as a melting pot of Western and Eastern influences. The Temple of All Religions is a complex that houses not only an Orthodox church and a mosque but also a synagogue and a pagoda, among others. There are the many tea shops and halal restaurants to be found throughout the city, where one can find waitresses wearing headscarves and groups of Tatar and Chechen men sitting and chatting over tea.


In 2005, Kazan celebrated its 1,000th anniversary. In 2009, the Russian Patent Office granted Kazan the right to brand itself as the “Third Capital of Russia”. More recognition followed that year when the city was chosen as the “Sports Capital of Russia”, and it still is referred to as such. Kazan hosted the 2013 Summer Universiade, a global sporting competition for students, and was one of the host cities of the 2018 FIFA World Cup.

As the Third Capital of Russia, there is plenty to see and to do while staying in Kazan. Visitors can enjoy long walks down the city’s streets, as each of them offers a new arrangement of colors and historical buildings. Kazan is also among the leading centers in the economic, political, scientific spheres of Russia.

In 2014, TripAdvisor named Kazan one of the most rapidly developing tourist destinations. The number of engaging excursions and tours around the sights of Kazan and neighboring areas is simply astounding.

You can get to Kazan easily from many cities throughout the Central, Northern and Southern regions of Russia, and even the Far East. The city has two railway stations. Kazan-1 is located in the heart of the city, while the second one is in its northern part. To get around Kazan, jump on the metro, buses, trams and minibuses. The metro consists of 10 stations and runs from 6 am till midnight. There are 61 bus routes, so you won’t have any problems getting to where you need. If you visit the city in summer, it’s a good idea to rent a bicycle.

St. Petersburg: From the tsars’ palaces to Putin’s dining place