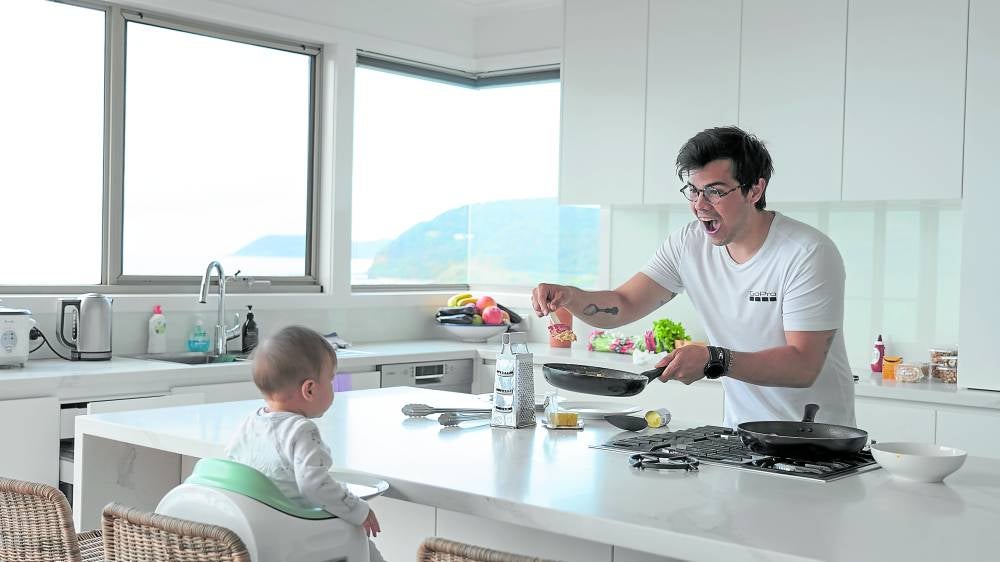 Erwan Heussaff on raising a foodie and other fatherhood lessons

On March 2, 2020, celebrity couple Erwan Heussaff and Anne Curtis welcomed Dahlia Amélie in Melbourne, Victoria, the Australian state where the actress was born. Eleven days after their daughter’s birth, Melbourne imposed one of the world’s longest and hardest lockdowns.

Initially, Heussaff, the French-Filipino digital content creator known for food, travel and fitness vlogs, was on tenterhooks. The shutdown in the Philippines disrupted his sources of income—his digital media company, The Fat Kid Inside, and his investments in The Palace, a lifestyle and entertainment complex. Physically cut off from friends and family, the resilient Heussaff managed to navigate the unprecedented challenges including lockdown fatherhood.

During Dahlia’s infancy, he noted that his role was primarily to assist and to nurture. “In the first few months of any baby, we realized that women were needed more by the child. I focused on purely helping around—the cleaning, cooking, taking care of everything else,” said Heussaff in a phone interview.

After six months, when Dahlia could hold her head up and not fall into intermittent sleeping, Heussaff became more involved in parenting while working remotely. Clients of his production company started coming back. Bolzico Beef, the importation of Argentinean beef with his brother-in-law Nico Bolzico, flourished as it pivoted to e-commerce.

However, the restrictive lifestyle exhausted him and unsettled his sleeping patterns. The lack of intense exercise to which he was accustomed led to weight gain. Working as long as 12 hours daily, he multi-tasked by taking Zoom calls while cooking Dahlia’s meals or changing her diapers.

Yet, the baby has the “silver lining.” If it weren’t for the lockdowns, Heussaff wouldn’t be present in every single moment of her life in the first year—except for grocery shopping, said the first-time father.

Dahlia started showing interest in food when she would stare at her parents during meals. To cultivate her palate, Heussaff served 100 different ingredients for 100 days. He then exposed her to different textures such as mashes, roasts, boiled and steamed food, smells and spices from pungent to aromatic.

After a year of bubble family life in Melbourne, the Heussaffs returned to the Philippines in February 2021. Heussaff set up a home office and has since developed a hybrid work situation. Even with household help, Heussaff cooks the meals, while he and Curtis are hands-on in taking care of Dahlia.

The toddler’s defoodvelopmental activities are posted in her Instagram account, which was set up by fans. The posts show Dahlia playing with clay, painting and helping with the cookie mix.

“Early educators will tell you that tactile experiences are very important in terms of mobility, hand-eye coordination and getting used to different textures. Painting and coloring provide visual and mental stimulation and hand-eye coordination. Cooking falls into that category. It uses your full capacity,” said Heussaff.

When Dahlia started helping her father in the kitchen, the process was understandably messy. Over time, she showed more control. “She can scoop out flour and put it carefully into the egg batter. It doesn’t fall all over the place. It’s fun for her,” said Heussaff.

Cooking likewise helps to build the child’s reflex responses. “When I’m cooking eggs, I show her how hot the pan is so that she understands that she should stay away from fire and certain things. She knows how sharp knives are. It’s a stimulating experience for her so that she’s always on her toes,” he explained.

Pushing two years old, Dahlia has been building her vocabulary in French and English. When Heussaff cites a French word, she knows the English translation and vice versa. The parents expose her to Tagalog conversations.

“It’s incredible how a child can learn to be bilingual from the get-go,” said Heussaff. “I don’t know how to teach a child in three languages right away. I was born in the same environment. I learned English at a young age. My parents thought I would pick up Tagalog but it never happened. I went to French school in the Philippines but it didn’t offer courses in Pilipino. I understand Tagalog but I don’t have a good handle in speaking it. I don’t want to repeat that with Dahlia so that she can speak all her three mother tongues fluently.”

Last December, the Heussaffs flew to France for a family reunion and toured other parts of Europe. During the long-haul flight, Dahlia neither complained nor threw a tantrum. But he admitted traveling with a child though memorable was demanding.

“You want to do as much as possible during the day, but there was a certain schedule to follow in terms of her naps and eating. It was more logistically challenging. But it added a fun element to it. You travel at a much slower pace. You appreciate smaller things like parks, greenery and long walks,” he said.

“When Anne and I traveled, we could potentially be in a different city every day. Breakfast, lunch and dinner were reserved in different restaurants. We’d book hotels not apartments with kitchens as we did recently. With Dahlia, it’s more convenient to be able to cook our own breakfast. If she’s having a bad day, then we’d go back to the apartment so that she could chill, and I cook lunch and dinner. It’s a different way to travel.”

At her age, Dahlia is turning out to be a foodie. “She can eat anything. In every restaurant we went to in Europe, they were shocked. The waiters would say, ‘I have never seen a kid eat like that.’ We would always order a plate for her which was not from the kiddie menu, like steamed fish and sauce,” said Heussaff.

Despite all the rich, albeit plated food in Europe, Dahlia didn’t gain weight. “She has her mom’s genes. Anne has an amazing metabolism. She can eat anything in any quantity and it’s difficult for her to gain fat.”

Heussaff noted that the toddler’s eating habits and preferences can still change as she grows older.

As the pandemic enters the third year, Heussaff is optimistic. The outlets at The Palace are slowly reopening. Business at The Fat Kid Inside is recovering to prepandemic level.

Heussaff is working out with his trainer again. The ease of restrictions allows him to travel extensively around the Philippines with Dahlia.

“The No. 1 lesson from 2021 was to hold zero expectations of what we think would happen in the world. It’s learning to live month by month, seeing how things develop and taking advantage of what liberties were afforded,” he said.

Heussaff has learned to set barriers between work and life. Once a week, he detaches from the digital world to focus on his daughter. That mental space has reinvigorated his passion for work and has given him time to think things through.

“Before, you’d see me work Saturdays and Sundays. I was in that cycle of thinking that everything was urgent. Grabbing every business opportunity was good in your 20s and early 30s. At 35, I realize that not everything is pressing,” he said. “Dahlia helped to offset that for me. Now I understand why balance is important.” —CONTRIBUTED