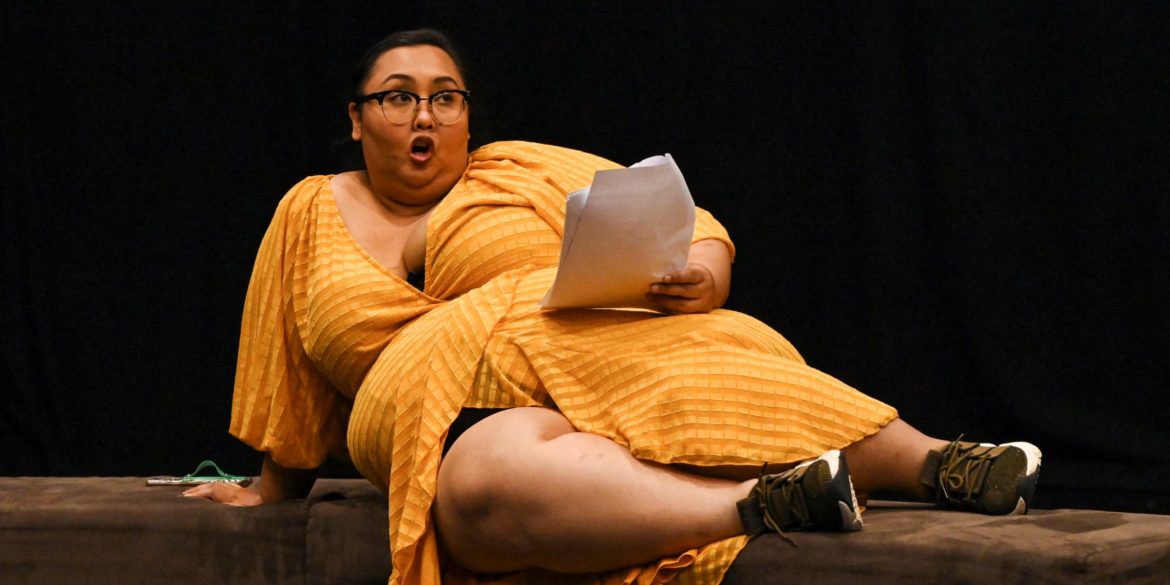 This photograph taken on April 30, 2021, shows Singaporean actor Ross Nasir during a rehearsal at the Esplanade theatre in Singapore. - The Singapore musical comedy is about dating as a plus-size woman, highlighting a nascent fat acceptance movement in a city-state that once forced children to join weight loss programs. (Photo by Roslan RAHMAN / AFP) / TO GO WITH Singapore-social-health-women, FEATURE by Catherine Lai

Singapore, Singapore — “I dare you, watch me as I undress,” sings actor Ross Nasir in a Singapore musical comedy about dating as a plus-size woman, highlighting a nascent fat acceptance movement in a city-state that once forced children to join weight loss programs.

“Fat-shaming” — discrimination based on weight — is still common in Singapore and across Asia, activists say, but there are signs that the traditional view that only slim can be beautiful is being challenged.

“It just took a longer time for people in Asia to get used to fat acceptance, but it’s growing,” explains the 35-year-old, whose show “Big Brown Girl” shines a light on the prejudices curvy women face when looking for love.

While many Western countries have seen diverse body shapes in advertising campaigns and fuller-figured models such as Ashley Graham and Paloma Elsesser, Asia is still seen as lagging behind.

Singapore’s controversial scheme to weigh schoolchildren and send those regarded as overweight to join mandatory fitness programs ran from the 1990s to 2007 — but some feel it reinforced prejudices that linger on today.

Activist Aarti Olivia Dubey, who has more than 30,000 followers on her Instagram account “curvesbecomeher”, says: “When it comes to our unconscious biases, when it comes to weight stigma, it’s still very much a problem.”

And while the anonymity of the online world can encourage vitriol from trolls, social media is also helping drive change.

Dubey is among a new generation of influencers on TikTok and Instagram, reaching a global audience with body-positive messaging.

The play, commissioned by Esplanade, Singapore’s national performing arts center, lets the audience choose which dates Ruby goes on out of 10 potential scenarios, in Singapore and overseas.

The comedy is based on the experiences of Nasir, co-writer and director Melissa Sim, and other stories they have gathered over the years.

“When you think of dating or love story or romance, you don’t automatically think of it from a perspective of a bigger person,” Nasir says.

“When we don’t see someone who is similar to our shape and size and color you begin to think that maybe these things don’t happen for these sorts of people — but they do.”

The production also touches on the issue of race as Nasir is a member of the ethnic Malay community, a minority in predominantly ethnic Chinese Singapore.

“Being brown also has its difficulties” in Singapore, she concedes.

Finding love can be “a little bit harder for someone who is a little bit bigger, or comes from a minority group,” she added.

The success of “Big Brown Girl” follows the 2021 hit show “The Other F Word,” a one-woman autobiographical show by plus-size actor Miriam Cheong.

The 27-year-old grew up during the period when the Singapore government enforced its Trim and Fit (TAF) scheme, which saw children undergo physical assessment and ordered them to do compulsory, regular exercise if they were regarded as overweight.

“I thought it was something that I deserved in essence because I was a fat kid and I was unfit,” she admits, but in hindsight, feels she was being “shamed” for being overweight.

While officials credited the program with helping reduce childhood obesity, critics linked it to psychological problems and eating disorders among participants, and it was eventually halted.

Social attitudes around body positivity are slowly shifting in conservative Asian nations but significant challenges remain for women who don’t conform to traditionally held beliefs around how women should look.

In Singapore, a 2019 YouGov poll found four in ten people said they would not date someone who is overweight, while around 70 percent believed looks impact professional and personal success.

In Japan, popular comedian and plus-size actress, Naomi Watanabe, fronts advertising campaigns for everything from clothing to skincare — but she still endures abuse over her size.

The creative director for Tokyo’s Olympic ceremonies, Hiroshi Sasaki, was forced to quit last year after comparing the 34-year-old to a pig.

And in South Korea, plus-size model Vivian Geeyang Kim has campaigned to persuade curvy women they have nothing to be ashamed of.

Kim, who is a US size 10, runs an online clothing shop and publishes a fashion magazine specifically for plus-size women in South Korea — a first in a country where beauty is defined by rail-thin teenage K-pop stars and TV actresses whose diets are strictly controlled by their management.

For Dubey, who became a fat liberation activist after struggling with eating disorders for years, the fact there are a growing number of shows and discussions around body image and society’s unrealistic expectations is a sign of progress.

But the 40-year-old warns that there is still a long way to go.

She says: “People will wonder, well why is this an issue?… that’s because fat-shaming is definitely still one of the most acceptable ways of discrimination.”

It’s 2021, and fashion still snubs the plus size

Being weight-shamed from a young age has long-term consequences