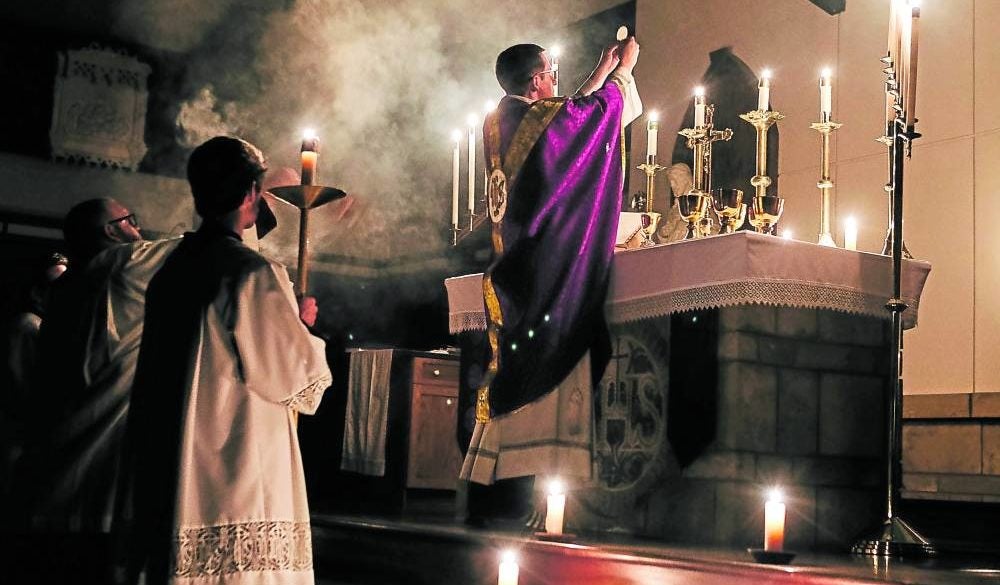 The color violet is mainly used during the liturgical seasons of Lent and Advent.

Is the Lenten season still relevant?

“Let nothing disturb you, let nothing frighten you, all things are passing away: God never changes.”—St. Teresa of Avila

We have been experiencing an extended Lent for two years now. What started as “We have more time to rest!” back in March 2020 has turned to “I wonder when this isolation and mask-wearing madness will end?” in 2022.

It was by the very design of the good Lord Himself in the book of Genesis that human beings should not live alone, that ultimately, other human beings are humans’ most suitable companions. And this is not just in the sense of marriage. Even committed and happy singles need company from friends and loved ones. Even contemplative and cloistered nuns live in a community. It’s simply how human beings were made to be.

As Ash Wednesday again fast approaches, one may ask: Why do we still need Lent despite all the sadness, the pain and the isolation we have been experiencing? Isn’t that Lenten enough already? I’d like to pose four arguments on why, yes, the Lenten season is still relevant:

1. Lent is a suitable opportunity to unite our sufferings with those of Jesus.

I recently saw a tweet by Fr. Jboy Gonzales, SJ. He was responding to a tweet by Dr. Jayeel Cornelio, which called out feel-good Christianity that enabled people to live selfish lives. Father Jboy said: “We forget the goal of Christianity is for us to be holy like God. It is the truth: We are loved, blessed and our life has a purpose. But that should give us the courage to live out its values—and that would be excruciatingly painful. The cross is not glamorous.”

Jesus Christ in sacred scripture never promised His followers a comfortable life. No one—not even the richest of the rich—escapes suffering. But we do have a model: Jesus.

On the cross, He presented Himself as the purest of offerings to God the Father in atonement for our sins. But He has also called us to be cooperators in His salvific mission. Lent is a wonderful time when we can give God our daily sufferings for Him to turn them—in one way or another—to something better.

Also, we can learn from our sufferings. Some of us have been so hurt by others. We live in a culture of paasa, ghosting, noncommitment and using other people. It really does hurt when you’re on the used end. May we learn from those experiences, never treating others the same way we were treated!

2. Lent is a time to rediscover the sacrament of confession.

Many people ask why they still have to go to the sacrament of confession if they can just be sorry for their sins personally. I think it’s a very valid question.

In the Gospel of John (20:21-23), though, we read that Jesus Christ gave His apostles—the first bishops of the Church—the power to forgive sins: “He said therefore to them again: Peace be to you. As the Father hath sent me, I also send you. When he had said this, he breathed on them; and he said to them: Receive ye the Holy Ghost. Whose sins you shall forgive, they are forgiven them; and whose sins you shall retain, they are retained.” So this sacrament has its roots in none other than divine revelation itself! It’s not just another practice of the Church.

From a human standpoint, I must confess (see what I did there?) that it is hard to go to confession, especially for someone with a history of a scrupulous conscience like me, which can make things mentally draining and very discouraging. But we need it. Let’s make use of this supreme sacrament of mercy.

3. Lent is a time when we can consider that we actually need help.

For many people, the past two years have been very tough, mentally speaking. Yes, depression is real. It’s not just about people feeling very sad. If it were just that, would people go so far as to end everything? If you feel that what you’re going through may be something serious, do consider talking to an expert: a therapist, psychologist or psychiatrist. Lovingly support people you know who are going through mental illness. Don’t just tell them to “get over it”—if it were that easy, they would have done it already!

4. Lent teaches us that after the suffering, there will come an Easter.

Life will throw blow after blow against us—we can either succumb to the blows or use them to become better, kinder and holier. There will come an Easter. It may not be big, it may not be fabulous and it may not be grand, but an Easter will be an Easter. Hopefully, at the end of our lives, persevering through tough times and being grateful for the good times, we may come to experience the Easter: Eternal happiness with God forever and ever, which ought to be the end goal of our lives.

I wish everyone reading this a blessed Lenten season ahead! May the good Lord bless us all. —CONTRIBUTED

The author is pursuing his master’s degree in Catholic Studies at the Franciscan University of Steubenville, Ohio.