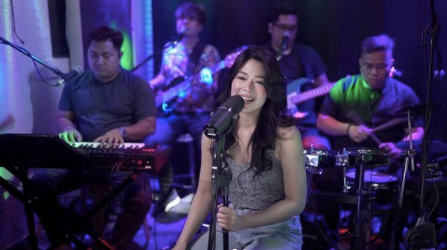 Why Gigi de Lana doesn’t drink salabat for her voice

Singer Gigi de Lana does not believe in taking salabat (ginger tea) to protect her voice. For her, it just doesn’t work, because she looks after her voice through other ways.

De Lana was asked about how she takes care of her voice during the online press conference for the “Domination” tour with her band, The Gigi Vibes, yesterday, March 1.

She also confessed that she’s not the type of singer who would rely on remedies or drinks like salabat (ginger tea) to protect her voice.

She clarified though that she doesn’t discount the effects of traditional remedies for those who find these useful in their singing, because she’s only speaking for herself. Instead, she emphasizes the need for rest, drinking lots of water and practicing everyday.

De Lana is one of 2021’s breakthrough stars who headlined YouTube Music Night and was featured as one of the performing artists in 1MX Dubai last December. She welcomed 2022 with a bang with the release of her self-titled debut album featuring her hit single “Sakalam.” She also recently gave life to “Nasa ’yo Ako” from the official soundtrack of “Viral Scandal,” and “Bakit Nga Ba Mahal Kita” in the OST of “Hello Heart.” JB