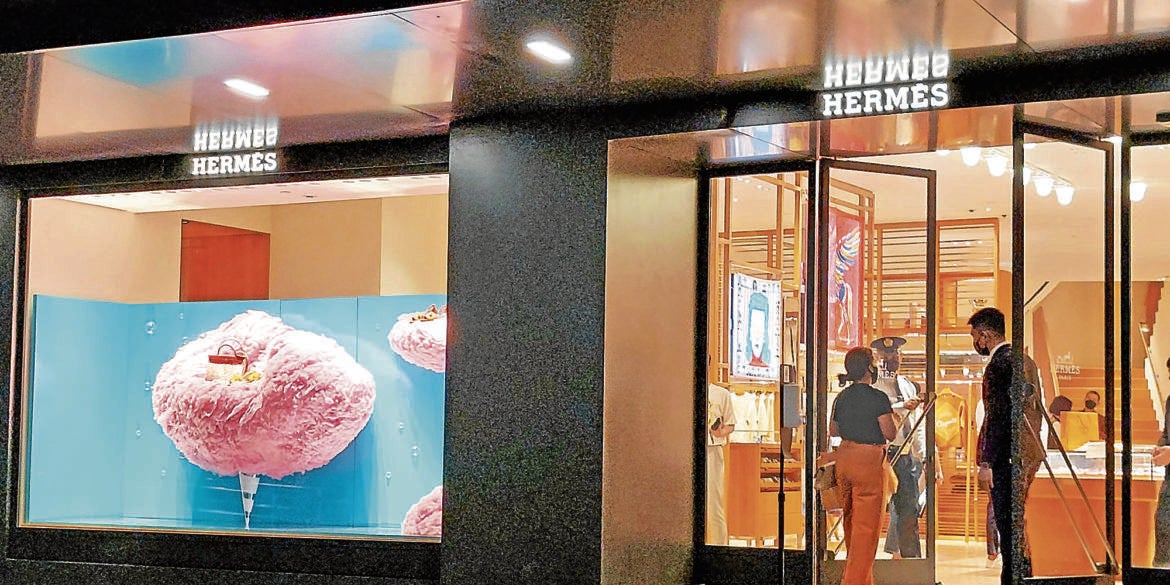 A shopper walks into Hermés in Greenbelt 3 on Tuesday. The luxury brand just opened its expanded boutique in time for alert level 1. —PHOTOS BY EUGENE ARANETA

It may take a while before retailers see pre-2020 crowds in stores, but the foot traffic in the malls March 1, as Metro Manila and other key areas eased to the “new normal,” was quite encouraging, according to retail leaders.

Steven Tan, president of SM Supermalls, noted that their malls were markedly busier on Tuesday than recent weekdays, with a steady flow of customers coming in throughout the day. He added that restaurants in their properties were 90- to 100-percent full, with queues as early as 11:30 a.m.

“This is reflected by our foot traffic numbers. Many of our malls in alert level 1 areas saw double-digit increases in their foot traffic compared to the previous Monday,” Tan told Lifestyle via text message.

“These increases were felt not only in our flagship malls like Megamall and Mall of Asia, but also in community malls across the country like Marikina, Pampanga, Dasmariñas (Cavite) and Davao,” he added.

Tan said this has been a trend in the past 24 months under the pandemic—the foot traffic noticeably increases in the SM malls whenever restrictions are loosened.

Anton Huang, SSI Group president, also said they’ve been preparing for this scenario, especially as they saw good traffic in their stores during the Christmas holidays, proof of “renewed confidence from shoppers to pay our stores an actual visit.”

SSI Group launched its e-commerce site, Trunc.ph, during the pandemic, which helped cushion the blow of store closures during the lockdowns, as many retailers relied on online sales.

As early as two weeks ago, before Metro Manila eased to alert level 1, some retailers have already seen shoppers’ enthusiasm to once more visit the shops. “It’s a good indication that consumers are ready to ease back to their normal routine with safety protocols in mind,” Bryan Lim, vice president for business development of Suyen Corp. (Bench Group), told Lifestyle.

Lim said their restaurants in the Makati, Ortigas and Bonifacio Global City business districts saw the most dramatic increase in foot traffic. Their food outlets have increased their seating capacity to 100 percent. He noted that with many workers reporting back to their offices, road traffic is also back, such that many may have chosen to eat out to wait for the rush-hour traffic to subside.

“We had seen a spike in foot traffic, even when we were just in alert level 2,” said Eunice Velasco, Ayala Malls marketing director. “Our team on the ground has been thoroughly briefed to look out for customers and remind them, if needed, of the applicable guidelines. We have also put out our mall advisory and adjusted operating hours on our website and social media pages.”

Mall operators and store owners have long been preparing for this scenario, and the past two years have given them ample time to practice new protocols.

“These preparations included rebriefing all our mall-based personnel, and an audit of our health and safety protocols for customers,” Tan said.

“The discipline to protect ourselves and others has been instilled. It’s second nature to us now, we follow rules and safety protocols,” Lim said, adding they have increased the frequency of sanitation in their dining areas and have assigned a safety officer in all their outlets to remind customers of the protocols.

“Though the guidelines have been loosened, we will continue to be vigilant in making sure our customers feel safe and confident inside our malls,” Tan said. “Aside from a continued focus on safe malling, customers can also look forward to the opening of several new and exciting concepts in SM malls across the country. We didn’t stop hustling throughout the pandemic and as a result, we have an exciting pipeline of concepts ahead for Filipinos this year.”

The eased safety guidelines and the drop in the number of COVID-19 cases are just the shot in the arm retailers so badly need to bounce back from the losses of the past two years.

“I am optimistic that this transition to a lower alert level will again give the industry its much-needed boost,” Huang said. INQ