Yuka Saso gets her own stamps | Inquirer Lifestyle ❮ ❯ 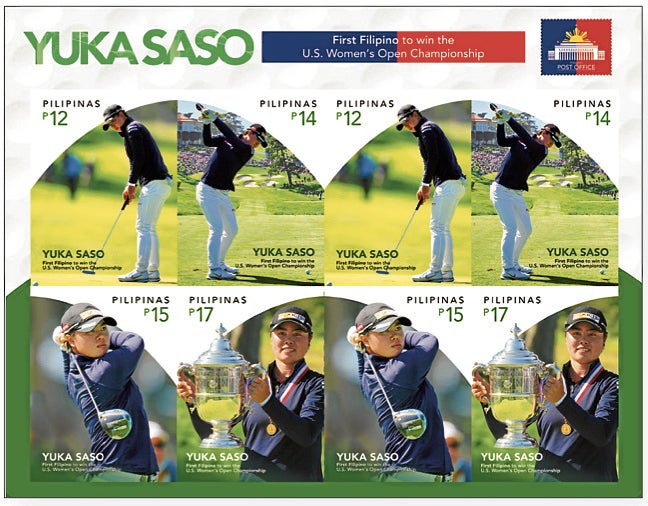 Yuka Saso gets her own stamps

The Philippine Postal Corp. launched stamps for Yuka Saso, the 76th US Women’s Open Champion. The stamps, which feature the golfer’s key moments during her win, were launched on Feb. 22 at the Manila Central Post Office. The four designs were unveiled by postmaster general Norman Fulgencio, Saso and executive secretary Salvador Medialdea.

Saso won the gold in the 2016 World Junior Girls Championship. She was commended with a national award for her double 2018 Asian Games win when, at 17, she nabbed the first women’s golf gold medal for the Philippines.

Saso was hailed by the Philippine Sportswriters Association as Athlete of the Year in 2018 and 2020. She also won two events during the Japan Ladies Professional Golf Association (LPGA) Tour: the NEC Karuizawa 72 Golf Tournament and the Nitori Ladies Golf Tournament. She participated in the 2018 Summer Youth Olympics and the 2020 Summer Olympics held in 2021.

Saso turned to professional golfing in 2019. With her stunning triumph at the 76th US Women’s Open on June 7, 2021, she became the first Filipino titleholder of a major golf championship. She was just 19 years old when she won the championship held at The Olympic Club in San Francisco, California, making her one of the youngest persons in history to win the US Women’s Open.

Fulgencio said, “We warmly welcome the 76th US Women’s Open Champion, the first Filipino to win this unprecedented victory. Her duel with Nasa Hataoka of Japan had us all at the edge of our seats. But Yuka’s discipline, patience and consistency paid off . . . We are very proud of you, Yuka, at nagpapasalamat ang buong sambayanang Pilipino sa karangalang inuwi mo. You inspired millions of Filipino youths to strive and play boldly. As one of the youngest to ever win the US Women’s Open, you have shown the world what the Filipino youth is capable of.”

He added, “The postage stamps we will issue today is our own little way of recognizing the achievement of Yuka Saso who truly deserves the honor. Her winning moment featured on the stamp shall forever remind us that the youngest US Women’s Open (champion) is a Filipino, and we will always be proud of her. We honor great Filipino individuals through stamps to fuel the Filipino passion for excellence anywhere in the world. Mabuhay ang ating mga mahuhusay at magigiting na atletang Pilipino.”

This is but another great issuance honoring one of our nation’s great athletes and these stamps can inspire the youth to fight for their dream. —CONTRIBUTED INQThe stamps are available at the Philatelic Counter, Manila Central Post Office. Tel. 85270108, 85270132; facebook.com/PilipinasPhilately