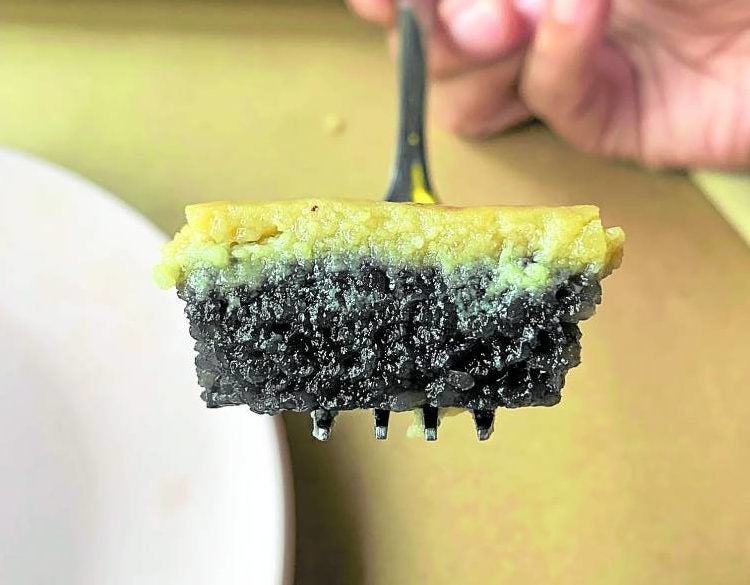 The famous “duman” at Betty’s

When I was growing up, Tarlac was a place my family would simply drive by on the way to Baguio. We never really considered it a pit stop—until recently, when I met Tarlaqueño traveler Emir Felipe Sicangco and his mom Lynn, who convinced me to drive two hours from the metro to try some of their hometown’s specialties.

Tarlac is a melting pot of Central Luzon since it is bordered by Zambales, Pampanga, Nueva Ecija and Pangasinan, says Emir. And the influences from the neighboring provinces are evident in the food.

First on our list was Kape Agape in Anao. The drive was picturesque, with fragrant ylang-ylang trees lining the road. Situated right beside the Iglesia Filipina Independiente was a humble neighborhood café with a beautiful wall mural of a diwata.

Dr. Ron Quimado, together with cousin Angelo Barroga and sister Jasmine Millo, opened Kape Agape in December 2017, converting what used to be the chapel’s storage room into a rented space where people meet over local art and good food.

The menu is limited, but is enough to have people coming. There’s penne pasta and nachos laced with sweet longganisa from Paniqui, but it’s the Pansit Anao that steals the show, since it features the best of what Tarlac has to offer—malunggay noodles from Barangay San Juan is seasoned with sesame oil and mango vinegar from Sto. Domingo, and adorned with sliced bell pepper, chicken gizzard, chopped nuts and fresh mushrooms from Don Ramon.

On Fairlane Road in Barangay San Vicente is Tatun’s Kambingan, which is a popular eatery among locals. What lures them, as the name suggests, are the goat specialties. Opened in 2015, this informal restaurant used to be located next door, but it moved to make way for an Italian concept called Stella’s.

Its new home is, well, literally a home that’s been turned into a joint with designated alfresco (garage) and indoor dining areas. Diners only have a dozen dishes to choose from, yet based on my experience, picking still proves to be a challenge.

On the Tuesday we visited, there was sinigang spare ribs, fried hito and buro with gulay. But on any given day, the menu carries its goat bestsellers—kalderetang kambing, sweet and spicy adobong kambing, papaitan and kampukan. The last item is like a saucy sisig made with goat meat and skin, and soured with calamansi.

Not far from Tatun’s is an open canteen that introduced me to more local fare and a new way of eating. Don Pulube Kitchenette has been operating for more than 30 years, but only five years in their spot on Bypass Road. Open as early as 5 a.m., the street-side eatery welcomes customers who usually just come and go, many of whom drive by for a quick takeout.

There’s fried luncheon meat, tortang talong and hotdog, but the real scene stealers are the igado, an Ilocano dish made of pork tenderloin and pig’s innards; suam na mais seasoned with alamang and gizzard; pork isaw paksiw; batsui, the Kapampangan batchoy; and my favorite discovery of the trip—bagis, which is ground carabeef cooked bistek Tagalog-style with red bird’s eye chili.

Another interesting encounter is ambula, a style of serving where a full order of rice is topped with half an order of your choice of ulam. For less than the price of a regular meal, customers still manage to get full by loading up on carbs. And it seems like this was a pretty popular offering, as a good number of diners had it while we were there.

Just 20 minutes away from the city proper is a newly opened restaurant tucked inside a farm. Ilac Thai Resto on Romulo Highway is actually into ornamental plant trading. As an extra source of income, Filipina Dhabie Ilac and her Thai fiancé started selling meatballs for takeout.

Last December, they tested the waters, extended their offering, and had two tables for dine-in. The demand surprisingly grew, with guests coming from far-flung towns, that they expanded and now have 14 tables and a space dedicated to cooking and dining within their lot.

The draw is hard to resist—traditional Thai fare, using ingredients such as kaffir lime and galangal grown on their farm, for no more than P120 a dish. The bestsellers are the Pad Thai and Tom Yum soup, but after sampling five of 10 menu items, what I liked the most was the rice noodle soup with pork and meatballs. It was light and clean, and for a hot and sunny midday meal, it provided just the right amount of comfort and pleasure.

For dessert, we turned to Urdu, a brand started by two childhood buddies serving chicken barbecue and clubhouse sandwiches back in 1965, now transformed into a bakeshop, thanks to one of their daughters. Emir, who is in his 30s, said he celebrated his first birthday in the original branch. They have brazo de mercedes, mocha torte, red velvet cake and egg pies, but the pastry they are known for is chocolate cake with a fudge caramel filling.

As a self-confessed kakanin lover, I was easily convinced to go to Tarlac because of Betty’s Special Native Cakes, started in the early ’70s by the late Beatrice Junio and husband Rolly. Selling kakanin was the couple’s way of surviving financial difficulties. Fortunately, the business succeeded, and from a small stall at the Tarlac Plazuela back in the day, they now have 16 branches all over the city.

The most sought-after item in their menu is the duman, akin to bibingkang malagkit, only this uses immature glutinous rice that has been beaten from their husks then toasted in a clay oven.

They also sell the Kapampangan tibok-tibok made of carabao’s milk, cassava cake, sapin-sapin, and puto. My favorite is the capit rolls, a mochi-like log filled with latik in the center. A similar version is the capit topping, where the chewy base is topped with a coconut milk custard.

Tarlac proved to be a joy to discover. And I plan on going back, as two days, surprisingly, felt short and incomplete. INQ