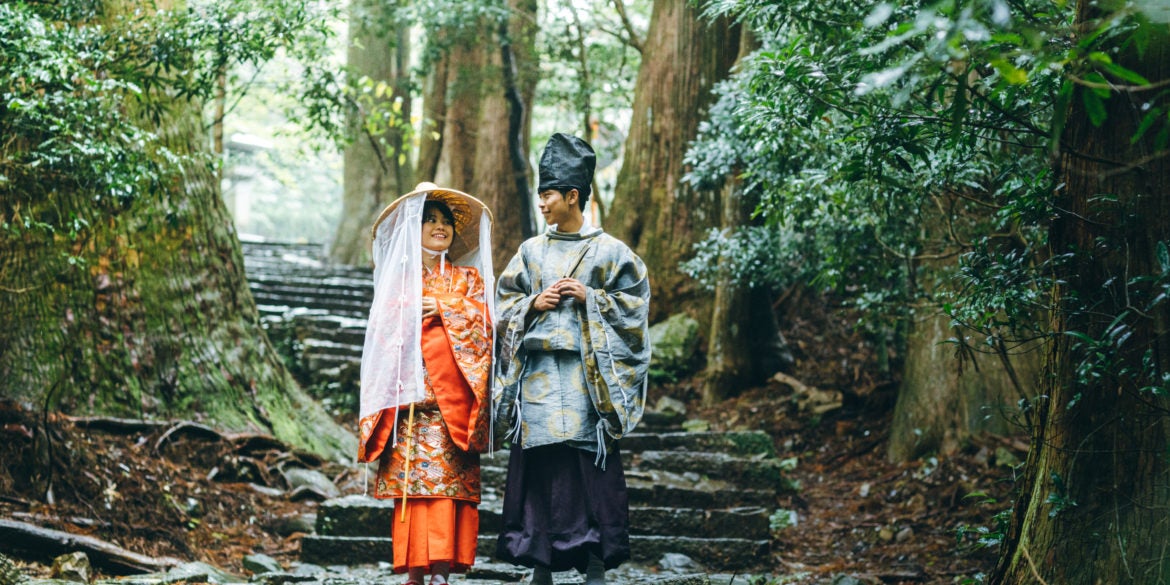 Japan has everything that will lure and captivate every kind of traveler.  The country has a number of UNESCO World Heritage Sites, temples, and castles for someone who is into architecture, history, and culture. Anime aficionados consider Japan as the ‘mecca’ of Manga, while foodies enjoy its extremely diverse cuisine.  But if you have been to Japan, crossed the Shibuya and took a photo of Hachiko, had your Onsen bath, experienced the lightning speed of its Shinkansen trains, queued up for fresh sushi and sashimi at the Tsukiji fish market, and got a glimpse of beautiful Mount Fuji, you may wonder: what else is there to do or see in Japan?

According to Japan National Tourism Organization (JNTO), the country has a lot of underrated places that are waiting to be discovered.  Thus, JNTO has launched a large-scale campaign aimed at discovering Japan’s hidden gems, expanding awareness of local experience-based content, and increasing motivation to visit Japan in the future.

Billed as “Unveiling a New Japan, Captivating Experiences”, JNTO’s latest campaign will provide information on local and unique activities and experiences that can only be enjoyed in rural areas, far from the hustle and ­bustle of other tourist spots.  This is aimed to influence Asian tourists particularly from South Korea, China, Taiwan, Hong Kong, Singapore, Thailand, Vietnam, Indonesia, Malaysia, and the Philippines who have visited Japan more than once, and to encourage them to discover more new facets of Japan as a travel destination.

The Growing Need for Travel to Japan: Foreigners’ Perspectives on Tokyo 2020

Based on JNTO’s survey about the impression of Japan for future visits from overseas residents, it was found that the inherent strengths or attractions of Japan, such as its history, traditional cultures, sceneries, and landscapes, have improved tourists’ impressions and motivation to visit Japan. 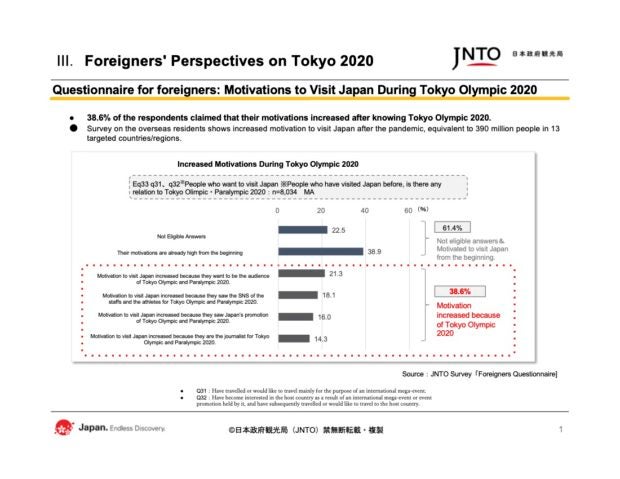 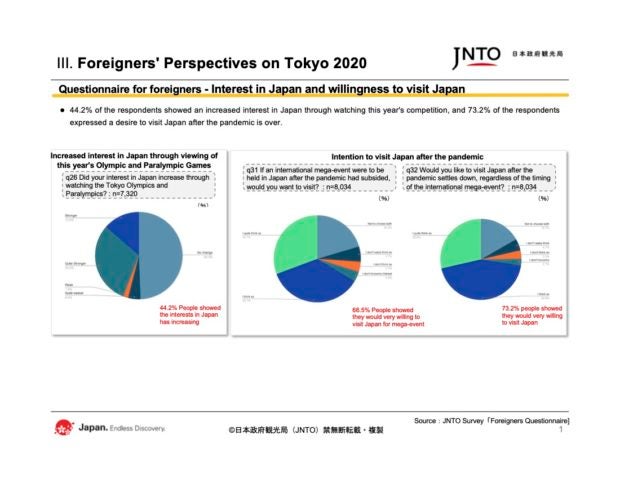 (*) Respondents of the survey consisted of  8,034 overseas residents in 13 countries/regions. They are:

3) Aware that the Olympic and Paralympic Games were held in Japan; and

4) Applicable to either of the following: a.) Have traveled or would like to travel mainly for the purpose of an international mega-event, or b.) Have become interested in the host country as a result of holding an international mega-event or event promotion and have subsequently traveled or would like to travel to the host country.

Disseminating information to dispel the anxiety of Coronavirus (COVID-19)

In addition, JNTO is taking the following measures to dispel the concerns of visitors to Japan regarding the pandemic.  The organization has developed COVID19 Control Measures to ensure tourists’ safe travel to Japan, such as the following:

1. Creation of pictograms to communicate Japan’s countermeasures against COVID-19 in an easy-to-understand manner (available in 15 languages)

These pictograms provide easy-to-understand information on countermeasures against the spread of the new coronavirus variants, and on emergency responses and information so that foreign tourists can visit Japan with peace of mind.  The said pictograms are available in English, Korean, Chinese (simplified), Chinese (traditional and Cantonese), Thai, Indonesian, Vietnamese, German, Italian, French, Spanish (Spanish and Mexican), Russian, and Arabic.

2. Dissemination of information related to the new coronavirus variants through the website

JNTO provides information about immigration regulations, contents about visiting Japan, and how to best enjoy Japan during the stay home periods, etc. Their website also shares information on how to eliminate anxiety when traveling to Japan.

Japan remains to be one of the most fascinating countries in the world. There is no shortage of places to visit and things to do to ensure tourists an experience of a lifetime.

Currently, new attractions are being created in various regions of Japan in preparation for resuming travel in the future. As part of this effort, JNTO has launched the “Unveiling a New Japan, Captivating Experiences” website as well as videos for each region. In this project, the areas of Japan will be divided into eight, and some sightseeing spots and activities that are not listed in famous guidebooks will be introduced according to the four seasons and passions.

By dividing per area, it is easier to understand how to access each location from regional airports with direct flights and major train stations, and by dividing per season, the information can be used as a reference for scheduling one’s trip according to the varying activities available. 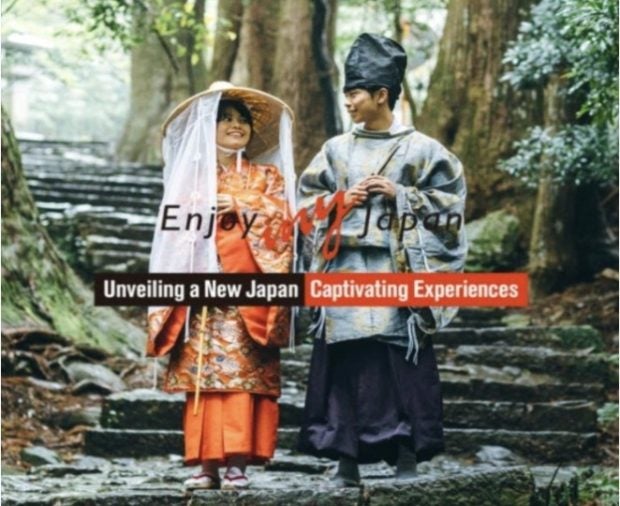 The website will also introduce visitors to some of the most fascinating hands-on activities in the region. For example, visitors can find information about “Aso Track Adventure,” where you can dynamically drive on the slopes and uneven roads of Aso in Kumamoto Prefecture, and “Heian Costumes Walk Experience,” where you can stroll along the Kumano Kodo in old aristocratic costumes, which are authentic experiences that can only be done in rural areas. 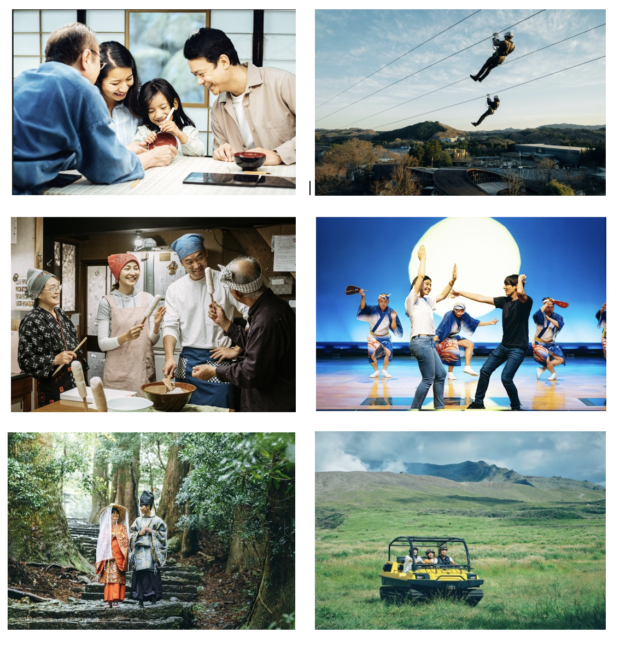 Other activities featured are the “Awa Odori” festival, Japan’s popular summer dance festival, the traditional handcrafting activity called “Chinkin-bori” in Kanazawa City, as well as a variety of four-day trips in the rural areas of Japan, with each one offering travelers a chance to see Japan’s hidden gems that are not usually visited but are just as beautiful.

JNTO recommends that if a tourist wants a truly unforgettable experience, it is always best to visit the other facets of Japan because experiencing its off-the-beaten path is the best way to see and feel the heart and soul of the country.

Pinoys who are eager to come back to Japan, you can check out their website and watch the video below for some future travel inspiration!