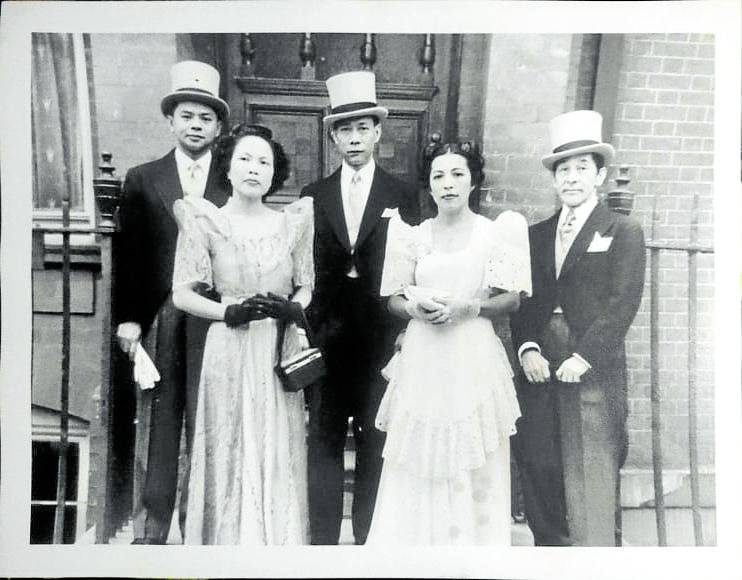 Mr. and Ms Ramon Felix (the former Amparo Acuña), right, with other legation staff during a reception at Buckingham Palace in London

From the antebellum years, the 1930s, comes news about yet another outstanding musical artist forgotten by history—a classical pianist from Capiz, Amparo Acuña, who gave acclaimed concerts in Manila and Spain.

Among the newspapers and magazines of the period, in Spanish and English, which followed the course of her career from 1929 to 1934, were La Vanguardia, The Tribune, Sunday Tribune Magazine, The Philippines Free Press, Graphic, Excelsior magazine, El Debate and The Philippines Herald.

She was born in 1906 in Capiz (later Roxas City), and came from a politically prominent family. Her father was the provincial governor, and Speaker (later President) Manuel Roxas was a first cousin. Her parents were Rafael Acuña and Concepcion Hispano of Valencia, Spain.

Spanish was the language at home. Acuña later graduated from the University of the Philippines with a degree in commerce.

At a very early age, she was forced by her parents to study the piano; in fact, her first piano teacher was Jovita Fuentes, no less. She didn’t like the lessons at first, but kept up with her studies until she became proficient in the art. Fast-forward: In 1933, Fuentes “de la fama internacional” gave a grand concert in Iloilo assisted on the piano by her former student, Acuña.

A rave review in Spanish, its origin lost, declared that “señorita Acuña was born to make art, divine art, a pedestal, to elevate and conquer the glory, a glory which reflects on the honor of the land of her birth.”

We first hear about Acuña as a performer in 1929, with The Philippines Herald announcing that she would give a concert at San Beda College. In connection with this event, El Debate hailed her as a great concert artist (“la gran concertista”). An unidentified review, most likely in La Vanguardia, which often reported on the pianist, declared that she gave a “grandioso” (superb) recital at San Beda; it was a great success, and all the numbers were well applauded.

By 1931, Acuña was known enough to embark on a successful series of concerts in Madrid and Barcelona, Spain. The Philippines Free Press, then published in Spanish, said that “she conquered Spain with five magnificent (‘magnificos’) concerts in various venues in Barcelona, where she graduated from the famous Academia Bidiella.”

La Vanguardia headlined that “La Acuña” was well received in Madrid, with “Amparing” quoted as saying that the experience exerted “una ponderosisima influencia” (powerful influence) on her.

Back on home grounds, in 1932, she gave a concert at Manila Metropolitan Theater “con la cooperacion de la banda de la Constabularia.” Another concert for the benefit of an antituberculosis society that year was considered a “triumph.”

One of the last concerts she gave was at the home of a Marguerite Teahan, apparently a prominent member of society, in February 1934, with composer Rodolfo Cornejo conducting Constabulary Orchestra. The Tribune and La Vanguardia reported that pianist and musicians received an ovation.

In 1936, Acuña married Ramon Felix, a banking and finance graduate of New York University who later became a diplomat who served in the Philippine legation, headed by Ambassador Leon Ma. Guerrero, at Court of St. James in London. A 1949 photo shows the Felix couple with other legation staff during a reception at Buckingham Palace.

With the marriage, the now Ms Ramon Felix said goodbye to music, opting to become a full-time wife and mother. She bore her husband five children.

Her son, Gabriel Felix, a businessman named after his grandfather, recalled that their mother “was a devoted housewife always in support of my dad, who was an old-school disciplinarian, and she would always act as a peacemaker. We the children always wondered why she gave up all her achievements for marriage and family, and decided that she had experienced it all before and then chose a regular life over the glitz.”

Acuña, who died in 1986 at the age of 80, was part of a flowering of the arts, a kind of golden age in the Philippines despite the Great Depression in America: Manila Metropolitan Theater and Manila Grand Opera House, where international artists performed; Manila’s newspapers flourishing in three languages; Manila Symphony Orchestra, Abelardo and Santiago in music; Amorsolo, Tolentino and Edades in visual arts; Filipino opera divas interpreting Puccini in Europe; and the first generation of writers in English—Juan C. Laya, Stevan Javellana, Nick Joaquin, Bienvenido Santos and Carlos Bulosan in the United States. —CONTRIBUTED INQ