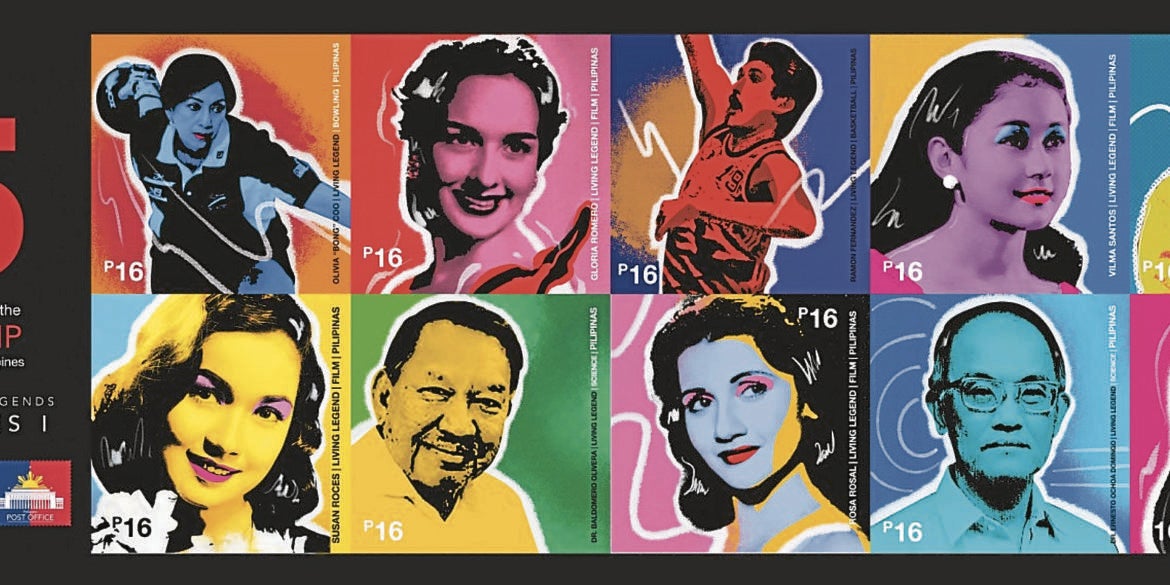 It’s the 75th anniversary of the first stamp of the Philippines and the Philippine Postal Corp. celebrated with the launch of the Living Legends—Outstanding Filipinos: Series 1 stamps at the Manila Central Post Office on Feb. 26. The theme? “Salamat: Pagpupugay sa mga Alamat.”

Living Legends—Outstanding Filipinos: Series 1 is the second of three categories of stamps released by the PHLPost for the milestone.

“We must honor our countrymen who have excelled in the fields of sports, theater and visual arts, science and technology, because they represent the true Filipino spirit of sipag, malasakit at pagmamahal sa Diyos at bayan. The stamps we issue today are not only meant for delivery of letters but more importantly to deliver hope,” said postmaster general and PHLPost chief executive officer Norman Fulgencio.

He described the stamp design as artistic and modern “pop art stamp.”

In-house designer Rodine Teodoro later explained to us the design concept, saying that the retro pop art theme is a nod to the era of a number of the honorees. “We want to show how colorful their careers were and their contributions to the Philippines in their respective fields.”

Ryman Dominic Albuladora and Eunice Beatrix are the other in-house designers who worked on the stamps.

Bowling icon Olivia “Bong” Coo, an honoree, said, “This is simply amazing, to be given this recognition at this age . . . I remember the biggest recognition I got when I was inducted in the International Bowling Hall of Fame in Arlington, Texas in 1993, but this has surpassed all the honors I have received as an athlete. I never imagined that I would be immortalized on a commemorative stamp. Wala po ako masabi, tuwang- tuwa po ako.”

Dr. Baldomero Olivera, who is in the United States, attended remotely. “It’s really a great honor. I certainly hope that a lot of young people will consider science because that will help our country in the future,” he said.

Basketball star Ramon Fernandez expressed how thankful he was. “After 24 years of taking action in the court, I humbly rest on the laurels of the great games that I played . . . I thought my sports credentials would end there. I thought I would have gone back home to Cebu with all my bags packed, with my golf set and new fishing gear, ready to embrace full retirement.

“When people address me as a living legend, it makes me feel truly special. But this commemorative stamp is the most concrete validation of the title which I hope I am worthy of . . . May this inspire [other athletes] to reach for their dreams, to work hard with the right values intact, and they always fight and play for greatness.”

Actor-turned-politician Vilma Santos attended the event via Zoom. She thanked all her fans and said she wouldn’t be where she is today if it weren’t for them.

Actress Nora Aunor was also honored with a stamp.

The winners of the first PHLPost Art Competition 2021, done with the Art Association of the Philippines, were also awarded at the event. Artist Ranier Angelo Bolivar’s entry “Pagsibol” won the top prize and P100,000. Second place went to Emil Jay Gulang’s “In Time,” and he received P70,000. Siegfried M. Dela Torre’s “Jesters Blue” got third place and P50,000.

They were chosen out of more than 300 entries sent by artists from all over the country.