KD Estrada on past struggle with self-esteem: 'I can’t even look at myself in the mirror' | Lifestyle.INQ ❮ ❯ 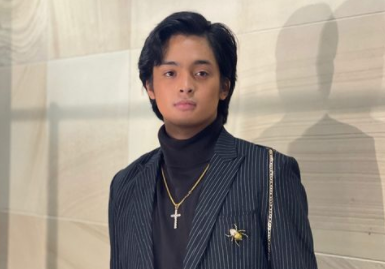 KD Estrada on past struggle with self-esteem: ‘I can’t even look at myself in the mirror’

“Bola-Bola,” his latest iWant series, tackles issues of body-shaming, self-love and bullying, thus Estrada was asked during the online press conference for the show which among the three issues had the most impact on him. Estrada cited two: body-shaming and self-love.

“The topic of self-love (had an impact on me) as someone who’s regaining confidence,” Estrada told reporters last Friday, March 18. “Last year, [my] self-confidence [was] below zero. I can’t even look at myself in the mirror. Slowly, I am healing from that self-pity.”

He explained that his self-pity came in the form of questions about his looks and his built, and of how he would compare his looks with others.

“I am slowly getting out of that,” he said. “You just have to take it day by day.”

On body-shaming, Estrada believes that each individual has a unique body type. He notices that in social media, people tend to pose and show off their physique a lot, which leads them to comparisons with other body types.

“You just have to accept yourself for who you are,” he stressed. Good thing plus size models have emerged too, he said. “I am super happy about that because we can celebrate all different types of bodies.”

Estrada plays a guitarist in “Bola Bola.” Directed by JP Habac and produced by iWantTFC, Dreamscape Entertainment and KreativDen, the series also features Analain Salvador, Danica Ontengco, Vance Larena, J-Mee Katanyag and Arlene Muhlach. It begins streaming on the iWantTFC app (iOS and Android) and website (iwanttfc.com) on March 26, with new episode drops every weekend on March 27, April 2, 3, 9 and 10. JB

KD Estrada wants to pattern his career after James Reid’s