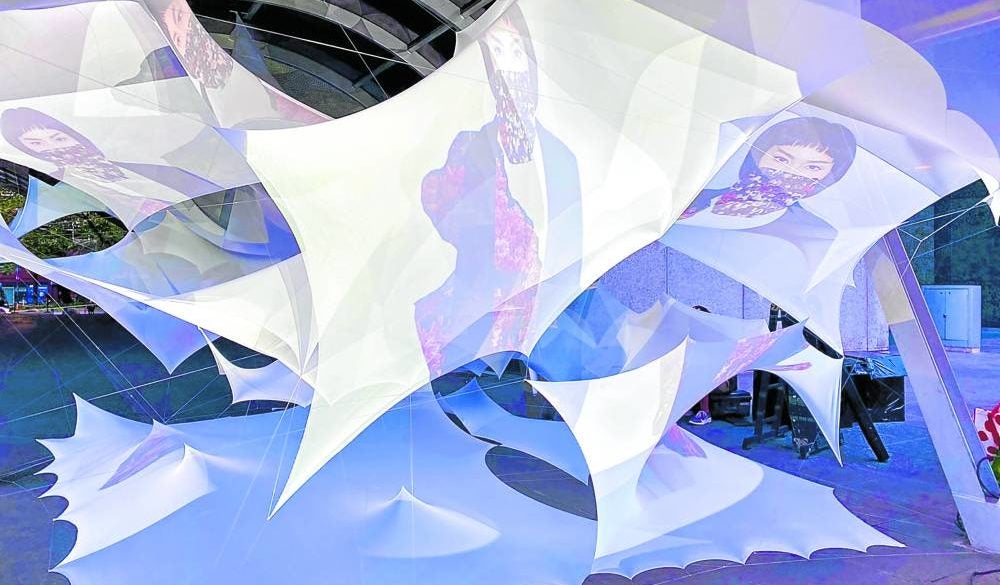 Vintage celebrity photos done on film by photographer Ricky Villabona for ’90s fashion magazines got people excited on social media. There was intimacy in the raw, mostly black-and-white photos of Regine Velasquez, Melanie Marquez, Eric Fructuoso, Piolo Pascual, even the late rapper Francis Magalona “who volunteered to strip to his skivvies.”

“There’s a slowness in it there, an anticipation,” Villabona said of the works he posted on Instagram (@rickyvillabona) for fun. Before digital photography happened, there was that challenge: “How would you do it without Photoshop?”

Villabona, who now directs commercials, unearthed his archive of contact prints to participate in the ongoing Art Fair photo exhibit, “Tattoos, Ternos and Couture: A Celebration of Philippine Fashion Photography.”

The tricky part was choosing which photos would be exhibited until April 1 in the limited collage panels along the covered serpentine walkway of Ayala Triangle Gardens in Makati City, which would be accessible public art.

“It’s not that difficult to tell what’s a good photograph,” Oshima told Lifestyle. “We didn’t look at who the fashion designer was or who the photographer was. It was just based on the image.”

The photos were a mix of old and new shots with those common themes—tattoos, ternos and couture—further categorized into niche subjects such as sexuality, counterculture, portraits, Studio Lahar and nostalgia. Some panels were accompanied by short quotes from writers; all showed how much work goes into fashion photos before they saw print. Unique situation

“Fashion is here and when the stock’s gone, it’s gone . . . the stuff I shot in the ’60s, nobody wears that stuff nowadays,” Oshima said. “I think the images were strong, but you have to show them in the context that they were taken.”

A powerful fashion photo, Oshima added, should have meaning outside the context that it was taken, so even if it was a commission, “The photographer is always trying to do something that breaks the rules . . . to make it into something special and unique with a vision—that’s the beauty of the medium.”

Is there a misconception about fashion photography in the Philippines?

“That it’s sort of dead, because nowadays, it’s all Instagram. People just take selfies and I understand that it’s completely democratized. And I think that’s good,” Oshima said. “But something’s lost, and we wanted to show that there have been practitioners doing great stuff by any standard, and I wanted people to understand that going forward.”

In the panel “Encounters and Memories,” Yao shows fashion photography outside commercial work. He interviewed local fashion designers about their childhood memories and the creative spaces that inspired them, revisited those locations, and took photos of locals wearing the designers’ works.

Punk fashion is shown in the counterculture panel, which highlights raunchy parties and raves, with the subjects wearing mohawks, leather and spikes.

Photos of indigenous tattoos were shown in designer Inno Sotto’s pintados bodysuit and the mambabatok artists of Kalinga. Oshima’s portraits of over 500 members of ethnolinguistic groups were shown, too, with the prints given to the subjects as tokens.

The Art Fair exhibit validates Philippine fashion photography as an art form, and for Nicdao, curating the exhibit “was an education.”

“Not everybody knows, especially now, that other photographers existed before and they’ve been doing this even before us,” he said. “It adds pride to fashion photography.”

The works that didn’t make it to the panels were collected into a looped video projected on what Nicdao called a “freedom wall,” which is more of an installation made out of layers of stretched white cloth that serve as screens, accompanied by music.

“Epson lent us the projectors to showcase photos and short films, and this ‘wall’ just had to be by the entrance,” he said. “It’s great to be part of the Art Fair because we always went before, and for fashion photography to be part of it is really cool and amazing.”

As Villabona said, “I never thought fashion photography would be part of the Art Fair because I used to think it is was not as respected as art, but thinking about it, I’ve seen works by American photographer David LaChapelle exhibited in an art gallery.”

“Tattoos, Ternos and Couture” gives fashion photography the respect it deserves, and reaches the younger Art Fair audience who never used or even saw film.

As the exhibit note said, it’s a “tribute to the fashion models, stylists, hair and makeup artists, producers, agents, drivers, grips and assistants, who worked tirelessly on the shoots that made these images possible.”