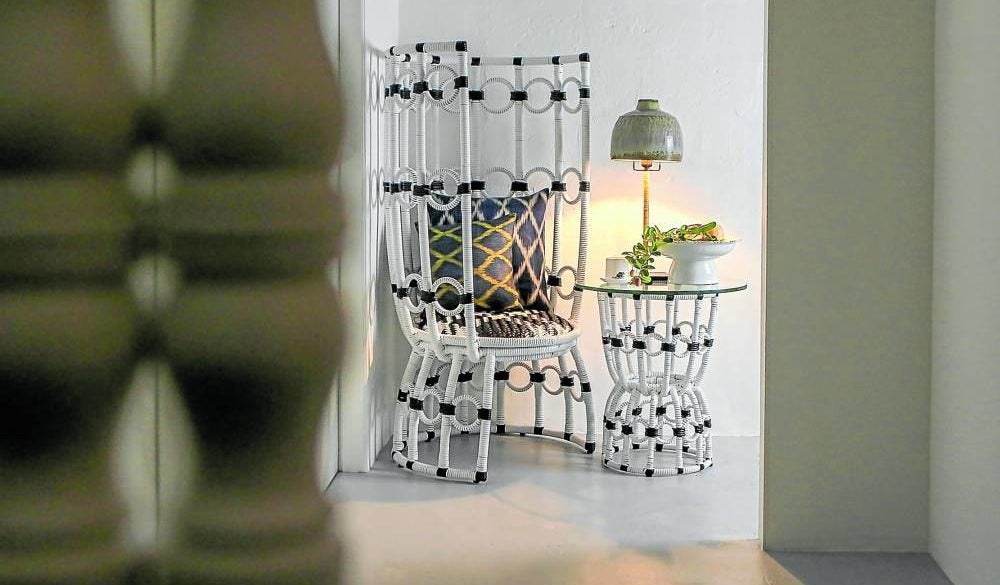 Ito Kish: A decade of turning the commonplace into chic

Fortunately, Kish had begun e-commerce before the pandemic. The shelter-in-place lifestyle boosted the online sales of both his imported merchandise and namesake furniture collections.

“There were more orders outside of Metro Manila, especially for the Baluster Collection,” says Kish, referring to the furniture, inspired by the turned balusters that hold up staircases in ancestral homes.

In the past two years, Kish has sold 43 pieces of his signature Gregoria Lounge chair. With a tall, curving backrest made of a series of carved, gmelina balusters, the three-seater is priced at P153,000.

This is a landmark year for Kish as he celebrates his 10th year as a furniture designer. He put the Philippines on the world design map with his application of traditional designs into contemporary furniture and accessories. An added narrative gave the design more meaning. His winning designs were tributes to the strong women in his life—his mother, maternal and paternal grandmothers.

His humble beginnings in San Pablo, Laguna taught him to be enterprising. In an interview, he said he once sold candy to buy materials to fix the water marks on their walls left by a leaking roof. As a student, he worked part-time as a theater usher.

Driven to succeed, Kish harnessed his natural flair for design by working his way up as a visual merchandiser and furniture stylist and entrepreneur. He shot to fame as a designer when his first foray, the Gregoria Lounge, won the Katha Award for Best Furniture Design at the Manila Fame in March 2012. The chair has since garnered top awards at international trade events in Italy and Korea.

The design evokes memories of Kish’s growing years in an old house.

The baluster, also called stair spindle, was a motif in ventanillas or cutwork transom windows and a vertical member of a rail in the bahay na bato. The Gregoria Lounge was named after his mother, a single parent who taught him how to fend for himself.

The Baluster Collection expanded to candleholders, a cabinet and console tables, all of which were tagged after his aunts. The last design, Raides, was named after his Lola Basilisa’s seventh child, Raides, who died at birth. The Raides marble-topped console table follows Gregoria’s trademark rhythmic patterns of balusters but on its bottom.

The classic solihiya or cane weaving was integrated into bold, geometric furniture. At the A’ Design Award and Competition 2014 in Italy, Kish won several awards. Three designs—the Basilisa armoire and three-seater and the Rodolfo console table—were recognized in the Iron Furniture, Decorative Items and Homeware Design category. His fourth award in Italy was in the Bronze Arts, Crafts and Ready-Made Design category for the Santamaria Stool.

The Basilisa recalled the chairs with woven rattan at his ancestral home. “My maternal grandmother, Basilisa, was courageous. She raised six daughters after World War II and still managed to run a business that flourished,” says Kish. His grandmother, then a septuagenarian, would fix the broken solihiya chairs by squatting down to weave the reeds while smoking a cigarette.

His estranged father, Rodolfo, was given a tribute in a handsome console table, made of black veneer and mahogany, embellished with pen shells radiating from a square hole. One side features the walls of the shelves lined with pen shells while the reverse highlights only the structural framework edged with the shells. Kish says the two-sided design referenced his father’s personality. “I remember my father as a kind man but he also had a crazy side.”

Kish elevated the commonplace into chic. Julia, an outdoor chair, took after the classic rattan chairs with loops on the back rest. The designer modernized it by creating a backrest that enveloped the sitter. It is built with PVC material and rattan to withstand the elements.

“My paternal grandmother, Julia, was a laundry woman who taught me to persevere. Though she was poor, she was content,” he says.

Kish has looked at other local inspirations. While sourcing the tingkop basket of the Tagbanuas of Palawan, he had an idea of turning it into a multitasking stool and container that was perfect for condos. The design is modernized with sturdy PE plastic strips woven into chevron and houndstooth patterns.

Kish expresses his penchant for midcentury design with the B-Luxe chair. It took after the batibot, the bowed wrought chair with a round seat. He glamorized it by playing with the proportions and upgraded the traditional iron frame into a silver and brass finish. It merited yet again another Katha Award for Best Product Design.

However, the style became a casualty of the pandemic. Kish explains that it was no longer feasible as it took four suppliers to produce one B-Luxe chair. There are specialists for the framing, the edging on the acrylic seat, the plating of the frame for shine and the prevention of metal corrosion. At the warehouse, another person assembles the parts. “It was a nice concept but we had to stop,” he says.

Pulling after the Organic Modern design, the Binhi is a three-piece collection of seats shaped like seeds and woven with polyethylene plastic. Kish explains that the seed is the start of new beginnings. It has won several international awards including the gold in A’ Design Award & Competition 2017.

After reaping several awards, he closed down his store in Bel-Air, Makati, in 2017 due to stiff rent. As a breather, he traveled around the world in 2018. By 2019, he decided to return to retail but in a compound of warehouses on J.P. Rizal, Makati. The containers of home elements arrived in early January 2020, but some items have yet to be released, he says.

Since the pandemic, the store has been open for appointments. Kish’s challenge is the slowdown of his furniture production. He was poised to come up with three new pieces—a lamp inspired by the walis tingting, a chair and a stool until the lockdowns came.

Making protypes would be costly for him. Unlike designers Kenneth Cobonpue and Vito Selma who have their own factories and an international network of distributors, he works with subcontractors and has only one agent in Singapore. These factories, he says, will not necessarily prioritize his designs. He says these designs must be exhibited at live trade fairs for their production to be feasible. This year, Manila FAME fairs are still going virtual.

Nonetheless, Kish is optimistic. Plans are afoot to double the space of his shop by midyear. “Retail must bounce back. There are many new homes that are looking for furniture and décor,” he says. —CONTRIBUTED