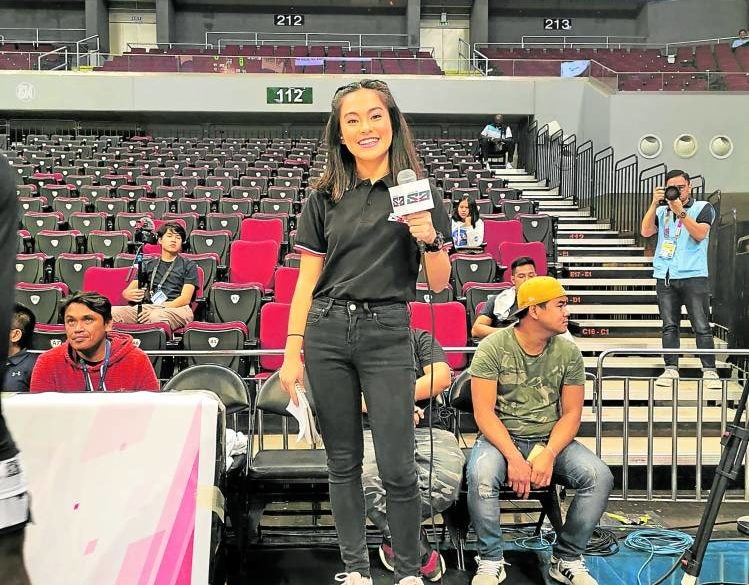 COVID cut her UAAP career short, but she’s bouncing back

Alyana “Yani” Mayo began the 2020 school year on a high. She was a junior jock representing the University of the Philippines (UP) on the radio station Magic 89.9. She was also named courtside reporter of the UP Fighting Maroons in Season 82 of the University Athletic Association of the Philippines (UAAP). But then, the pandemic hit and the season was officially canceled.

“It was devastating for me. I thought, what more for the athletes? I bawled my eyes out when I found out. It felt like a breakup from a long-term relationship—at least that is what I think it would feel like,” she told Lifestyle via email.

She thought about applying for the reporter job all throughout her college life. But it was only in her graduating year that she found the courage to send in her application.

Most viewers think that a courtside reporter’s job is simply going to the games and interviewing players during the break. In reality, it’s a back-breaking commitment to connect and develop a rapport with the players.

During nongame days, Mayo attended her classes as a broadcast communication major. When classes ended, she would rush to the gym to watch the players practice.

Players treated her like a little sister in the videos she posted. They were comfortable around her. The Maroons answered her questions seriously, sometimes jokingly. They teased her about her height, or lack of it, but she always had a ready comeback.

“After that, I would look for a library or coffee shop that was open 24/7 to do my homework and finish my studies. Sometimes my friends and I would end up sleeping there, then head home to just shower before school. It’s pretty hilarious to look back on,” she said.

Mayo was able to complete the basketball season. The most memorable game for her was when UP won over De La Salle Green Archers to clinch the twice-to-beat advantage in the Final Four.

“I had great stories about the players and the team really seemed to perform at their peak. We had a celebration afterward in the dugout. The players drenched each other and coach Bo Perasol with water,” she said.

The volleyball tournament was her next assignment after basketball. She had got a head start in getting to know the players by joining them in their team building.

She had a good relationship with the volleyball teams, which also gave her the confidence to face the cameras. But she only got to report twice before the games kept getting postponed until it was completely canceled because of COVID-19.

“[There was] the feeling of having an ‘unfulfilled potential’ especially since we won’t be able to bring the stories to light,” she said.

ABS-CBN Sports and Action (S&A) was initially determined to keep covering sports despite the pandemic. She was onboard to help them do just that.

“Then the closure of ABS-CBN came after and that hit hard. When ABS-CBN was denied a franchise renewal, we all lost our jobs. Our last meeting with the S&A team was through Zoom … It was the end of a chapter,” she said.

Mayo and her batchmates also didn’t have a physical graduation. She and her family drove to UP and took pictures with the sunflowers to ease some of the disappointment that she felt.

“Graduation was one of the moments that I really looked forward to. I was excited to graduate with my parents [there], who are both UP Diliman graduates,” she said.

She and her classmates video-called each other during the online ceremony and they still wore their best off-white clothes. She made an effort to enjoy the unique graduation experience.

Finding a job was not easy. But her exposure as a courtside reporter helped her score hosting gigs even before she graduated. She did collaborations with brands for online executions.

Insecurities came in, too, when some of her friends found stable jobs. But her mom reminded her to be grateful of the opportunities that came her way. That’s how she started focusing more on her content creation on Instagram (@itsYaniMayo). She also took up an internship for a fashion magazine to hone her writing skills.

“I did little things that would cheer me up, like make oatmeal in the morning and work out when I can. I do mini activities to fuel my joy. They add up,” she said.

Opportunities to work at the back end of media also opened up for her. She worked as a personal assistant to sports anchors before she shifted to scriptwriting and producing.

Mayo comes full circle as she returns to UAAP Season 84. She holds a different job title as the league’s segment producer. She’s in charge of the taped videos and interviews released during the broadcast.

“This opportunity came to me. I did not apply for it but was tapped because I worked with some of our top producers in previous writing jobs throughout the pandemic. I felt like this was my way of fulfilling my purpose and continuing where I left off when the league was canceled in Season 82,” she said.

In Season 82, she would share her photos holding a microphone in front of the camera. This year, she excitedly posts stories of the videos she helped make from the control room.

“I am more comfortable with being on cam because I am used to it. I am testing the waters with being a producer right now,” she said. “I understand what output I need to give but the broadcast has crazy deadlines that we have to meet. The schedule of games is mostly every other day. We want to bring out quality content but the main challenge is time. It sometimes feels like sleep is the least priority while working in the back end.”

It’s a challenging time as the media can’t have close contact with the players. Despite being at the same venue, they must continue to do their interviews via Zoom before they can collate their materials.

Working behind the scenes is something Mayo aims to be successful at, but she is dreaming to return on camera. Being an on-cam talent is what she dreams of.

The past two years have not been easy for everyone. But for the young people whose careers were suspended just when they were about to start, being able to find a job, resuming to do what they love and having a positive mindset should be celebrated and be counted as victories.