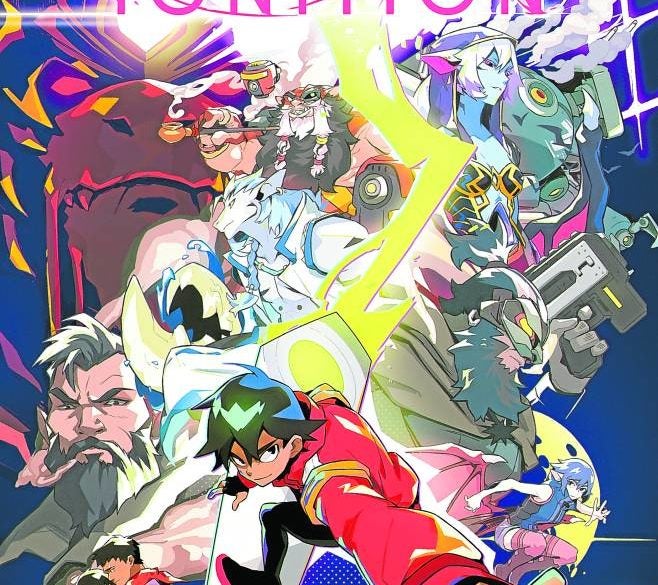 Imagine “a new universe of possibility, with alien civilizations inspired by creatures from Philippine myth and folklore, presented in ways you could never have imagined,” explains writer Paolo Chikiamco. “We invite you to get a taste of space opera, Filipino-style.”

He is talking about “Mythspace,” the sprawling sci-fi epic he has been working on with artists Koi Carreon, C.R. Chua, Borg Sinaban, Jules Gregorio, Paul Quiroga and Mico Dimagiba, which is about to journey into exciting territory.

“Mythspace’s” own creatve journey began when series lead artist Carreon approached Chikiamco in 2011, saying he and his friends wanted to make a sci-fi anthology comic together. “He knew I was part of the local spec fic (speculative fiction) community, so his original goal was to match each artist with a writer, but I decided we could make something more cohesive if I took on the writing solo, and we made it a shared universe. I always enjoy reimagining Philippine mythology and folklore in unexpected ways, and I also knew that many aliens in sci-fi are inspired by folklore, but I hadn’t seen any based on Philippine folklore. Hence, ‘Mythspace’ was born.”

The team self-published the ashcan “Mythspace” #0 in 2012, which had one story and teasers for others still in the works, then released a new story every Komikon until 2013. In 2014, “Mythspace” was picked up by the now defunct Visprint, Inc., which put out a collection, something Chikiamco was elated by: “They were always meant to be read together, even if each individual story can stand alone. Part of what makes the genre of space opera fun—thinks ‘Star Wars’—is the world building, and the feeling that the universe is deep enough to hold a hundred different stories. You’re only able to feel that in a format like this.”

The plan had always been to create each of Chikiamco’s stories with a different artist, as well as focus on a different race each time save for the first one, around which all the stories are interconnected.

Of artists, Chikiamco said: “Borg had a clean style suited to young adult-oriented work, and he wanted to do a heist story, so we bundled that with a Tan’gal focus and came up with ‘An Unfurling of Wings.’ Mico at the time was doing a rough-hewn, sketchy style and it matched his interest in noir and mysteries. We felt it would be fun to actually have a kapre that hewed to the ‘smoking’ trope and made a kapre detective the lead for ‘Uncommon Ground.’ Jules was working in a fully painted style, and wanted something suitably epic to fit it, so we gave him the Laho-Kapre War in ‘Devourers of Light’ and gave him space for many double paged spreads. Cristina (C.R.) has a softer style and was more interested in telling a grounded, emotional story. So she and I worked on ‘Humanity’ which tells the plight of the human slaves in the Kataw mines. Paul had an affinity for mecha and kaiju, so there was really no one better to do a story focused on the Nuno, who in ‘Mythspace’ ride mecha called Bungis, patterned after the Bungingis of lore. Finally, Koi took our main story, ‘Lift Off,’ which served as the portal fantasy/gateway for the readers.

When Visprint was shuttered and the team got the rights back for “Mythspace,” they sent out a few feelers but instead received queries themselves. “A big contributing factor was ‘Trese’s’ newfound prominence with the Netflix show, and several articles that focused on finding the next big Filipino comic mentioned ‘Mythspace.’ Chikiamco admits. “That caught the eye of a few publishers, one of which was Ablaze.” Ablaze is the US imprint that published “Trese,” the Philippine urban paranormal procedural series by Budjette Tan and Kajo Baldisimo, in North America.

Ablaze’s Rich Young reached out to the “Mythspace” team through Tan. “It felt great of course, and we knew from Budjette that they were doing great work for ‘Trese.’ We were excited that we would get to be a part of their catalog.”

But there was more the team wanted to do. “Mythspace” had been illustrated in black-and-white, and the team knew if they were to release it to an international audience, they needed to do it in full color, something Chikiamco and Chua had already done with their graphic novel “A Sparrow’s Roar” for US publisher BOOM! They had also all evolved as creators; the artists wanted to remaster their work, allow them to present what Chikiamco called “ the ideal version of ‘Mythspace.’” But to do all this would require a huge investment amount of time away from work, even though they would receive an advance from Ablaze.

Thus the team decided to embark on a Kickstarter campaign for the new volume, “Mythspace: Ignition,” which would run over 200 pages in full color. “It’s also a good way to show how much interest there is for ‘Mythspace,’ and to provide more content for readers if that demand exceeds expectations in the form of stretch goals after the initial goal is reached,” Chikiamco explains. “It also helps us publicize the book and get the word out across more venues even before it hits the presses.” There would also be digital and hardcover editions, which were not options with the Visprint run. “If the campaign meets its initial goal, we’ll have the opportunity to make more ‘Mythspace’ content available in different ways as well.”

Chikiamco pointed out, for example, Carreon’s work on “Mythspace: Ignition”: “Koi was an exceptionally dynamic artist even then, and he’s even more amazing now. People will be floored by his full color work for Ignition.”

Will there be more exploration of the “Mythspace” universe beyond the existing storie? “As for whether or not Bros’ story will continue, a lot of that is riding on the success of the Kickstarter and on how ‘Mythspace: Ignition’ is received,” he says. “If we can show that there is a demand for ‘Mythspace,’ there will be more ‘Mythspace.’”

The “Mythspace: Ignition” Kickstarter campaign went on March 22 with a goal of $6,000—and was fully funded by March 25. “It’s affirming and exciting,” Chikiamco says. “Affirming because it means our belief in our stories has not been misplaced—the fact that there are people who are willing to support us with their time and money, even with everything going on around us, means that there are many who see value in our work, and who are rooting for our success. It’s exciting because it allows us to turn our focus now to the stretch goals, and ways that we can get more of ‘Mythspace’ into the hands of our readers.”

Now that it’s fully funded, it means that “Mythspace: Ignition” will indeed be published in the planned full-color digital, paperback and hardcover editions and soon make its landing on comic bookshop shelves in North America by November. Even though it’s already fully funded, you can still pledge for the “Mythspace: Ignition” Kickstarter at kickstarter.com/projects/223713900/mythspace-ignition.

Just as a new galaxy of readers around the world will discover “Mythspace,” Chikiamco says readers in the Philippines who got in on the launch pad years ago will also have something to look forward to with the Ablaze release: “If you’ve already read the original stories, you know what we’re about—now imagine that turned up to 11 with full color and redone artwork that will show you what a decade of practice can do to already phenomenal talents.”

“Mythspace: Ignition” is certain going places and the team wants everyone to be all aboard. “’Mythspace’ was created to fill an absence, an absence of Filipino representation—Filipino culture, and Filipino creators—in a genre that we love,” Paolo Chikiamco concludes. “We hope that fans of space opera come out of this intrigued by the richness of Philippine folklore, and aware of the talent of Filipino creators. We hope that fans of Philippine folklore come out of this with eyes opened to the many ways we can reimagine our heritage and take inspiration from it.”