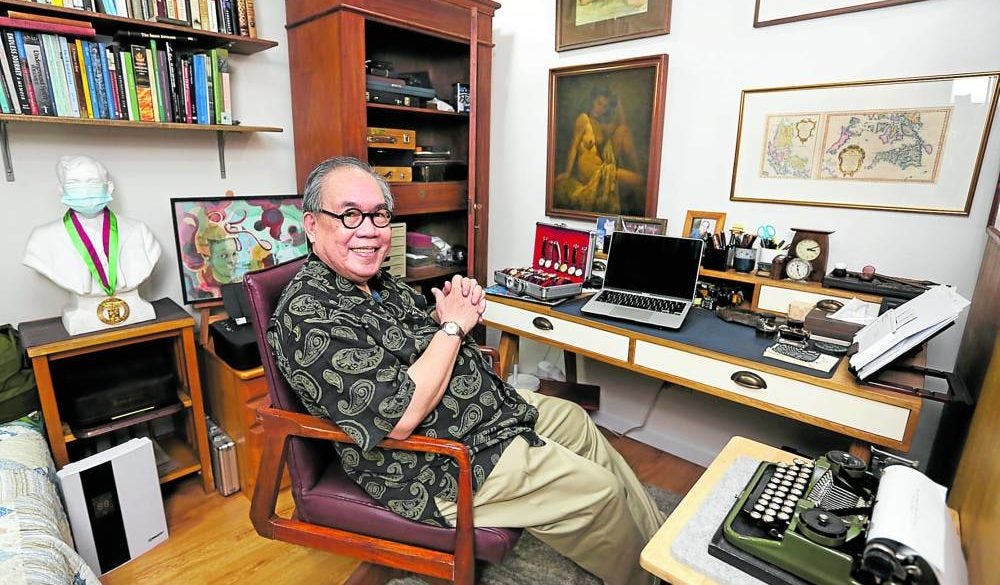 Butch Dalisay at his workspace, a melding of the new and old —PHOTOS BY EUGENE ARANETA

In his columns and Facebook posts, literary cognoscente Jose “Butch” Dalisay Jr. waxes enthusiastic about his collection of memorabilia—fountain pens, antiquarian books and manuscripts, typewriters and paintings. His mother’s three-story townhouse is a pack rat’s repository of articles, imbued with a storied past, culled from e-commerce sites, pickers and flea markets.

Clad in dad-core fashion, the 68-year-old Dalisay rocks in a black, paisley-printed shirt from eBay. At his workspace on the second floor, he surrounds himself with things that he cares about. But unlike other collectors who dramatically deploy their pursuits into distinctive decorative statements, he piles his finds into drawers, shelves, Art Deco cabinets and a 1940s Japanese-made leather suitcase. They coexist with silica gels, household items and junk.

Paintings are clustered by themes, such as backlit landscapes and illuminated seascapes by gifted but lesser-known Filipino artists, and nudes by E. Aguilar Cruz and Crispin Lopez. With wanderlust in check during this pandemic, he brings the Old World into his room with lithographs of Philippine maps and the shoreline of Basilan Strait with a palm tree etched against the sky.

Two MacBooks—one for serious writing and the other for surfing and leisure—are the most contemporary items on his desk. The mugs with fountain pens are put together with vintage desk clocks. The Apple Watch is largely ignored, but for daily use, he wears a contemporary brand, Bell & Ross.

The centennial bust of Jose Rizal by sculptor Anastacio Caedo is covered with a surgical mask for a dash of humor. It seems to blend with the playful artwork by Jason Moss for the cover of Dalisay’s novel, “Soledad’s Sister.” The shelves are lined with books for references and those signed by the authors, famous people and National Artists.

His writing commissions allow him to spend on objects that spark joy and, possibly, a return on investment later so that he could buy fresh finds. Dalisay adds that his wife, art restorer June Mercy—Beng in his stories—likewise indulges him.

Part of the delight in collecting is the search. Before the pandemic, the Dalisays traveled extensively and hit the museums and flea markets. Lately, he has been visiting eBay and other online marketplaces several times a day.

“You can buy cheap online from $10 to $20. I call myself a bottom feeder. I’m not one of those big-time collectors who will throw tens or hundreds of thousands for things. I wait and look for bargains,” he says. He once picked up a prewar Hamilton pen in a California antique shop for $5.

“You find good and rare ones in the least likely places,” he adds. Twenty years ago, while shopping for houseware at the Greenhills tiangge, he spotted a pen inserted in a cup in a stall. Examining it closely, he found that the gold nib of the pen was intact, unlike other old pens whose gold nibs were melted for jewelry making. Dalisay mentally calculated that it would fetch $500; the vendor gave it for P500.

Followers of Dalisay’s columns would know that his fountain pens form the core of his collections. Though a tech junkie who has amassed Apple products, he still loves pens for their history, craftsmanship and functionality.

Dalisay came from a generation that scribbled with fountain pens. His interest was revived while taking graduate and doctorate courses in the United States Midwest, the hub of America’s antique trade and the cradle of famous brands, such as Parker and Sheaffer.

He returned home in 1991 with a bounty of 50 vintage and some modern pens. The pen collection grew to 400 and has since been whittled down to 150. He favors the Montblanc Agatha Christie (1993) for its simplicity and its touch of romance—a winding snake pin which is a nod to Christie’s novels. The snake’s head is likewise engraved on the gold nib.

“I’ve been pen collecting for 40 years. After a point, you don’t look anymore,” he explains.

“So I branched out into other things. I get them from pickers. On Facebook, there are groups for used stuff. I’m a member of those groups. I use a different name and I make friends and connections with the pickers who make it their business to go around junk shops, garage sales and houses that have been demolished. They find paintings and books and call me. We negotiate.”

Collecting books and manuscripts offers the visual appeal of calligraphy letters, the tactility of the leather covers and the weight of parchment. The subject and the author connect the reader to the past.

“I would bring the books and typewriters to class, open and let the students smell so that they could understand the materiality of literature and culture. It’s not something they see in the movies,” he says.

Dalisay likewise lets students touch his oldest book, “An Abridgement of Notable Woorke” by Polidore Vergile, which consists of religious lectures and documents on the Church and state, published in 1551. The Italian-born Vergile was a religious pundit and historian who worked in England.

Bound in pigskin, “Las Obras y Relaciones de Ant. Perez, Secretario de Estado, Que Fue del Rey de España Don Phelippe II” (The Works and Relations of Antonio Perez, Secretary of State under Philip II of Spain) fetches $10.38 online. Dalisay purchased the first edition, published in 1631, at a much lower price. The seller’s caveat was that Dalisay had to buy 14 books from the same period just to get that edition. The total amount could have bought him a new MacBook.

Writers from the past

The pocket storybooks are by Saturnino Calleja, who taught children visual literacy at turn of the 20th century. Calleja, a Spanish author-publisher and proponent of education and children’s literature, sold books in the Philippines. Dalisay acquired over 100 miniature children’s books from a seller in Tanay.

From his modern book collection, he feels connected to a different generation of writers: Stevan Javellana’s “Without Seeing the Dawn” was signed by Zoilo Galang, the first modernist in English. “Volume Two,” a limited edition of Jose Garcia Villa’s poems, signed by the author, could be sourced only from eBay.

The “Crusade in Asia” by Carlos P. Romulo contains a typewritten letter to a person he was dedicating the book to. “These personal touches are interesting to me,” Dalisay says.

Connecting with boomers, he met Japanese-British Nobel Prize winner Kazuo Ishiguro, who signed his book “Artist of the Floating World” (1986), in London. Dalisay mentioned that they were both born in 1954. “That was a good year, wasn’t it?” said Ishiguro.

The magazines and documents reveal the conditions in which they were written. The documents, such as a letter in Old French penned in 1733 and a deed of sale in Norfolk, England, 1881, look like works of art with their fluid script letters. There is quaintness in the use of early 20th-century Tagalog in a deed of sale from 1918.

Citing the oldest edition of Philippine Collegian in 1922, wrapped in mylar, he remarks with a chuckle, “It expressed the same complaints from students—inadequate funding, autonomy, militarization. Nothing much has changed.”

As a kitschy but still functional relic, the typewriter evokes nostalgia for the analog era. Before the pandemic, Dalisay would invite his students to try out the keys and experience the sensory feedback.

His oldest, the Blickensderfer (1896), the first portable typewriter with a full keyboard, comes in an oak case. The Standard folding typewriter (1911) is one of the lightweight portables of its time.

Dalisay values old watches as legacy timepieces that exemplify reliability, a proven character and, perhaps, a provenance. His collection ranges from pocket watches from the early 20th century to leather-strapped accessories.

“Watches should do one thing: Tell the time easily and clearly,” he says. “I like midcentury watches because they have clean faces. They are not complicated.”

There’s more to this collection than meets the eye. Ultimately, Dalisay collects to satisfy a curiosity. “I want to encounter history on a more intimate level.” —CONTRIBUTED