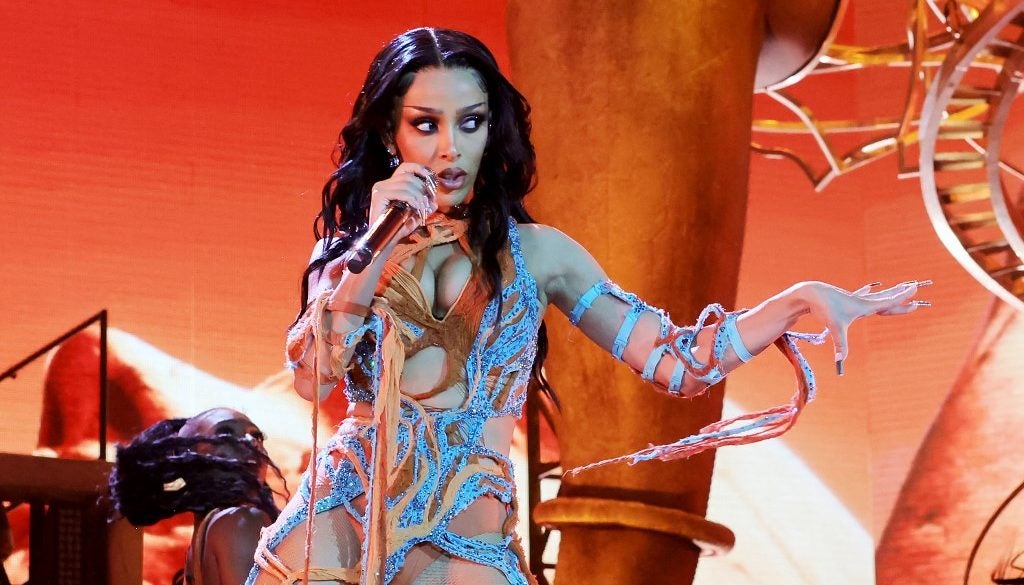 by Valerie MACON with Maggy Donaldson in Los Angeles

Doja Cat brought headbanging, flames, and the devil herself to Coachella’s main stage Sunday night, serving a headliner-worthy performance for her solo debut at one of the world’s most-watched music festivals.

Performing for thousands of screaming fans during the final hours of the first weekend’s slew of featured artists, the 26-year-old dealt her hits in addition to dropping new material: her forthcoming track “Vegas,” which samples the classic “Hound Dog,” is slated to feature in Baz Luhrmann’s film “Elvis.”

Born and raised in Los Angeles, the performer spent years in relative obscurity but caught industry attention on the music-sharing site SoundCloud.

In 2019, she burst onto the global scene with her sugary disco track “Say So,” whose glossy music video was an ode to SoCal in all its warmly lit, poolside glory.

But the version Doja Cat delivered Sunday was a rock-forward, punk-tinged rendition, striding across the stage as she rap-growled out the originally bubble-gum bridge.

Donning thigh-high lace-up boots in iridescent pink, she wore a yellow mini that just grazed her thighs and a studded harness bra top with glittering flames.

The singer-rapper gripped her mike with a spiked elbow-length glove, daring the crowd to take their eyes off her as they jumped when she demanded they jump, screaming all the while.

Doja Cat, born Amala Dlamini, is the daughter of an American painter and the South African actor, composer and producer Dumisani Dlamini.

She dropped out of school at 16, devoting much of her time to scouring the internet for beats and instrumentals she then crafted into her own songs.

Doja Cat is beloved for her stagecraft, producing hits both radio-friendly and TikTok-set. But mostly, it’s her complete and utter willingness to go there that’s made her a household name.

She’s fostered an image as one of music’s oddballs: a sexy, space-age, shimmering artist with a sharp sense of humor and social media power that’s seen her swiftly skate past controversy even when she unleashes unfiltered — and sometimes offensive — gaffes.

Sunday’s performance was fresh off of her first Grammy win, which she took home for “Kiss Me More,” her collaboration with SZA that was the ubiquituous soundtrack of 2021.

The set was highly polished but still unafraid to get weird, with a plethora of outfit changes — all of them barely-there, all of them booty-baring.

For her crescendoing rendition of “Tia Tamera” she brought on rap’s punk rebel Rico Nasty, the latter snarling in a devil costume as she leered and pranced across the stage.

Earlier the stage had gone dark before Doja Cat emerged in a zebra-print two-piece hot pant set with sashaying knee-high boots that lent an air of Elton John.

Doja Cat closed the night with lasers and pyrotechnics, leading her dancers in a raucous, leaping final frenzy — but not before everyone onstage took shots.