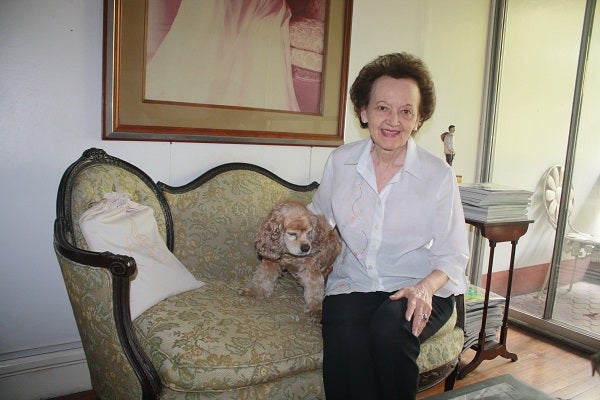 Finding heart and home in the Philippines

MANILA, Philippines – American book author and writer Beth Day, Spanish master artist Juvenal Sanso, and balikbayan lawyer and entrepreneur Loida Nicolas Lewis are all well-renowned and respected internationally in their respective fields and they had no doubt in their minds that they wanted to make the Philippines….their home.

Beth Day first became endeared to Filipinos after she married Filipino military general, patriot, book author, journalist, educator, diplomat and former President of the United Nations General Assembly (the first Asian and the first and only Filipino to hold the post, when he was elected in 1949) Carlos P. Romulo. They first met in New York City 1958, when she was assigned to write a feature story on him for The Reader’s Digest. Back then, she was a freelance writer and he was serving his term as Philippine Ambassador to the United States.

Beth and the General were inseparable until the day he passed away in 1985. By that time, she had decided to stay in the Philippines for good. “I used to have an apartment in New York. I used to pay every month for it to be maintained even though I would only go there for a couple weeks every year. Eventually I put it on the market,” said Beth.

According to Beth the best attribute of the Philippines as a retirement haven is the Filipinos themselves. “The friendliness of the Filipinos, especially towards visitors is without question. Even when I came here for the very first time in the 1950s, the Filipinos were very friendly, very warm. They are very helpful to visitors. If you need help with anything, Filipinos are glad to help. They’re very attentive and they love to talk,” she said.

Beth also noted that Filipinos speak English well enough for foreigners to enjoy good communication when they are here. “For anyone from an English-speaking country, the Philippines would really be a good place to choose for their retirement.”

World-renowned painter Juvenal Sanso  was born in Reus, Catalonia, Spain in 1929, moved to Manila four years later with his family, established himself as a painter in the 1950s, then travelled the world –making Paris his place of residence for 50 years. In 2008, he decided to return to the Philippines and what he calls his “beloved Manila.”

Having lived in Europe for decades, it is very interesting to know why, of all places – and yes, he could have stayed in Paris, of course – he decided to go back to Manila. Before he answered that question, however, he emphasized that he doesn’t consider himself retired.

“I am not retired. There is no retirement when it comes to what I do. Renoir, for example, continued painting into his old age, even when his hands were already twisted [by arthritis]. They had to tie the paintbrushes to his hands. But if you look at Renoir’s paintings during that period, you can see the delicacy of the strokes – no sign in his works that his hands were already crippled and in great pain,” Sanso said.

Nevertheless, he was gladly given his SSRV card by the Philippine Retirement Authority and enrolled in their program – granting him well-deserved privileges and benefits.

“The best thing about the SSRV is when I travel abroad and return here. It’s very easy to go through immigration at the airport,” said Sanso.

Attorney Loida Nicolas Lewis is neither a typical balikbayan nor a typical retiree. Yet she has a love for the Philippines and the Filipinos that spurs her to share her blessings to them. She’s mostly out of the country every year, but she maintains her home and her businesses in the Philippines and always comes back for about two weeks, 4 times a year, to be with Filipino relatives and friends.

Loida is Chairman of TLC Group, Inc., a Delaware Corporation with private equity funds.  An attorney by profession – who is admitted to practice in both the Philippines and New York – she was the first Filipino woman to pass the New York bar without attending law school in the United States.

Her husband, the late Reginald F. Lewis was the first and so far the only African American who engineered the purchase of a billion dollar company-Beatrice Foods International on a leverage buy-out.  She succeeded her late husband as Chair & CEO of this company, turning it around and so making her land in the front cover of  New York’s magazine’s Top Businesswoman in America. The company shareholders, notably, received a 35%internal rate of return on their investments.

“Now that I have retired from business I always come back here in the Philippines as I am more comfortable here rather than in Florida or any other country.  I am a Filipino; born in the Philippines. I love Filipino food and Filipino traditions,” she said.

She currently resides in New York City and is a registered member of the St. Ignatius Loyola Catholic Church. She actively sits as Member of the Board of the National Catholic Reporter, USP4GG, Apollo Theatre and Regiland F. Lewis  Foundation. She speaks several languages:  English, French, Spanish and Filipino.

She also founded The Lewis College in Sorsogon in 1999 in memory of her late husband–she doesn’t consider this as a business but rather as giving back her blessings to her fellow Bicolanos. (For other information about the college visit: www.thelewiscollege.com

As a balikbayan, she considers retiring in the Philippines very ideal because of the hospitality of the Filipinos, and, of course, because she is among her people. “Filipinos have all the virtues I like: kind, hospitable, helpful, sensitive and compassionate. For a retiree like me, these are the best qualities of people I want to be around me,” she said.

Loida is also an advocate of medical tourism because she believes that the Philippines has world-class healthcare. This, she believes, is of benefit not only to balikbayans like her, but also to foreign travelers seeking medical care overseas.

Loida is currently working with a group on ways to amend US legislation, so that more US senior citizens, including those of Filipino descent, will be able to use their Medicare card to cover their bills when they avail of medical treatments in the Philippines.

Loida added, “The US Medicare does not cover expenses incurred outside the US. With Eric Lachica as our lobbyist, we want the US Congress to amend Medicare law to allow Medicare Insurance to be applicable in the Philippines. This is known as US Medicare Portability.”