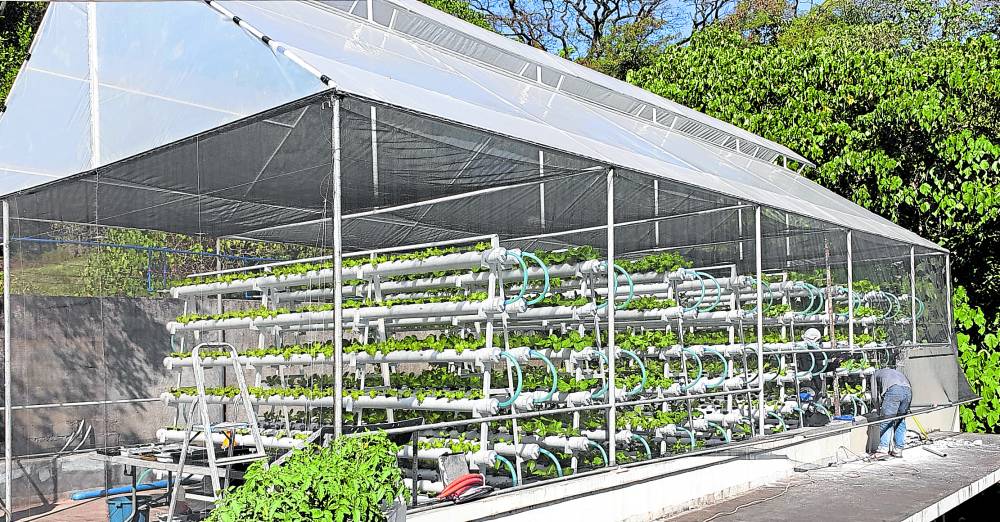 Instead of a rooftop garden, Daniel Dy opted for a vegetable garden in a hydroponic setup so he could also sell the harvest. Hydroponics grow in suspended tubes with the roots dangling down to absorb the nutrient solution and alkaline water.

Food crisis in the Philippines by 2025, according to an agronomist, turned management consultant Daniel Dy into an urban farmer.

Four years ago, Dy transformed the unused 100-square meter roof deck of his home in Quezon City into to a vertical farm. Eighty percent of the space has been devoted to salad ingredients growing on suspended tubes, one-tenth for a nursery and the remaining portion for a trellised alfresco dining area.

Dy flew to Vietnam and Israel to learn more about hydroponics or soilless farming.

He cites that the Philippines’ food security is threatened by vanishing farmlands, scarcity of water, the burgeoning population and demand for food. This is aggravated by the unpredictable weather and natural calamities that destroy crops.

“Agronomists have delivered a powerful strong message that water and food will be scarce in this decade. We will feel the pangs in three years. Every household needs to think of addressing this. We need to find a suitable place near us for urban farming. Friends or village residents can chip in for an urban farm,” says Dy.

As fields to plant crops are turning into offices and condos, Dy is looking upward to construct urban farms on vacant rooftops and idle plots in densely populated areas. One advantage of hydroponic farming is the volume of produce can feed its surrounding neighborhood. If the food supplies from the provinces get cut off due to lockdowns or effects of natural calamities, urban farms can provide the city’s needs.

The “agripreneur” has been working with two developers to set up the sky-top farms on idle rooftops of their commercial buildings. Recently a homeowners’ association sought Dy’s help to put up a soilless farm in their village.

Dy underscores the rooftop, balcony or plot of land must receive at least six hours of continuous sunlight. “Some balconies or roof decks are covered by shadows, trees or other houses,” he notes.

The basic soilless system needs a cup, a nutrient solution and a growing medium or foam to support the seeds. “The roots will dangle down from the suspended medium and be submerged directly into the nutrient solution. Some people call them floating cups,” he explains.

The cheapest way is to use recycled containers such as a Styrofoam boxes or a plastic bucket. Order a starter kit or nutrient solution from Lazada, University of the Philippines Los Baños or online suppliers. Poke holes on a recycled plastic food-grade vessel and use it to hold up the plants. Keep the crops vertical.

For a DIY system, use PVC pipes to nestle the potential vegetables and mount them on a wall and a water pump.

“Hydroponics are postorganic,” he says, referring to a term for soil-free farming. “While it’s producing food, water is conserved. It’s not dependent on soil fertility. It’s clean. That’s the urban solution to possible food shortage.”

For a DIY system, use PVC pipes to nestle the potential vegetables and mount them on a wall and a water pump.

“Hydroponics are postorganic,” he says, referring to a term for soil-free farming. “While it’s producing food, water is conserved. It’s not dependent on soil fertility. It’s clean. That’s the urban solution to possible food shortage.”

He has been cultivating salad lettuces, cucumbers, cherry tomatoes, microgreens and herbs.

The benefits of hydroponics at home are the freshness and the high nutritional value of the vegetables. “We harvest the vegetables 30 minutes before meal time. They are extremely crunchy and sweet. It converted kids into eating vegetables because they can’t buy that kind of quality anywhere,” says Dy.

“Second, you know where your food comes from because you’ve handled it from the seed to the harvest.”

Initially, Dy gifted the neighbors who were impressed with the freshness of the vegetables and their three-week shelf life.

“Why do our vegetables last so long? Soil is the source of mites and pests. Soilless farming is devoid of harmful bacteria. After some time in the refrigerator, vegetable are crisper; they are as good as freshly picked. Soil-based vegetables start to rot in three days.”

Despite typhoons and torrential rains, the vertical setup on his rooftop remains intact. “A soil-based plot would have been wiped out,” he says. “We need to work with nature if we want to be sustained by it.”

To maintain his rooftop farm, Dy ventured into retail with FarmTop, an online retailer of organic vegetables and dressings and supplier to Landers and S&R.

Meanwhile, his rooftop farm, which overlooks the Marikina valley and the mountain ranges, became a site for a wedding proposal. Cameras were hidden among the plants to document the special moment.

“It looked as if they were in Tagaytay,” says Dy. —CONTRIBUTED