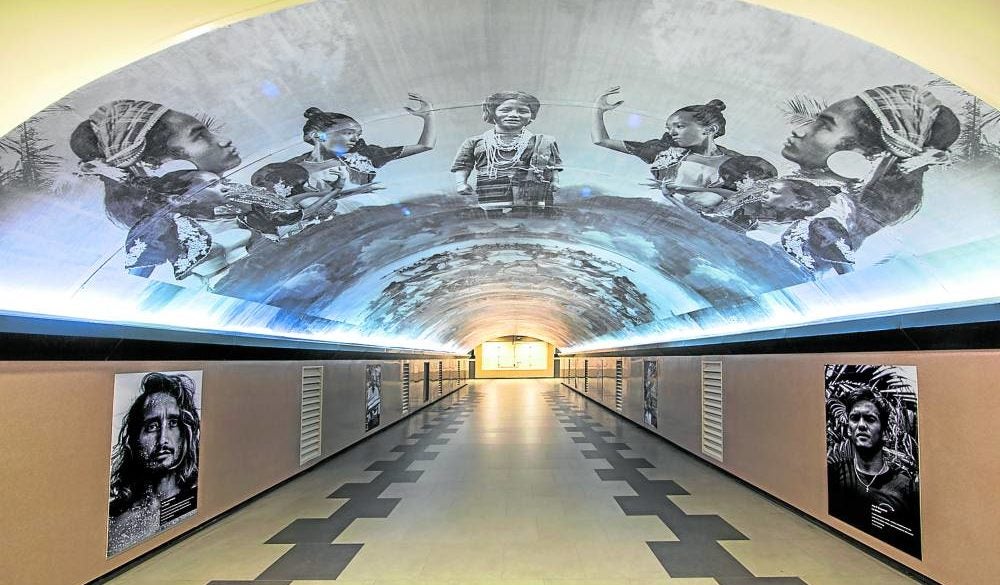 Makati rises: The story of the Central Business District in images

Flourishing trees facing the corner of Ayala and Makati Avenues soften a strategic glimpse of the concrete sprawl that is the Makati Central Business District (CBD).

Amply illustrated through the constructs are the timeless universal values of well-being and mobility for all, economic vigor, aesthetics and ecology.

Tysmans’ photograph dramatically depicts the melding of old and new. Almost hidden under the living green canopy is Nielson Tower, the central structure on what was a military airport in 1937. Today’s Ayala Avenue was the runway. The 1,600-hectare expanse, formerly Hacienda de San Pedro de Macati, was owned by the Zobel de Ayala family.

In the 1970s, the control tower was repurposed into Filipinas Heritage Library. It is now a famous restaurant, Blackbird. The former football field, now a public garden, was the site of peaceful demonstrations against the authoritarian government in the mid-’80s.

Makati Stock Exchange, designed by National Artist Leandro Locsin, was one of the first few buildings in the CBD in the mid-20th century. It is now dwarfed by Tower One and Exchange Plaza.

When it was inaugurated in the late ’90s, Tower One not only became the new hub for capital trading; it also set the trend in high-rises with its glazed facades that famously reflect 180-degree views. These stunners border Ayala Triangle Gardens, virtual lungs of the CBD and site of the forthcoming mixed-use Ayala Triangle Gardens Tower Two.

Soaring above the cityscape, the gleaming minimalist Zuellig Building was the first in the country to get an LEED Platinum in 2013. It is the highest rating awarded by Leadership in Energy and Environmental Design (LEED), a green building certification program used worldwide. LEED has been the benchmark for an ecology-adapted building.

Tysmans’ photo in the book is nothing less than inviting, with wide sidewalks and waiting sheds, and implies orderly vehicular and foot traffic.

“Fifty Years and Forward” traces Makati CBD’s growth since 1963 and how Macea, according to the needs of the times, periodically redevelops the city in coordination with land users, property owners, developers, creatives and urban planners.

Fernando Zobel de Ayala, CEO and president of Ayala Corp., sets the book’s tone by presenting the vision of the late Col. Joseph McMicking, original managing partner at Ayala Corp. McMicking’s wife, Mercedes, was the daughter of industrialist-philanthropist Fernando Zobel and Consuelo Roxas. An American pilot and also an entrepreneur, McMicking was a member of Gen. Douglas McArthur’s war staff.

As the country emerged from the war, McMicking discerned bright prospects in developing the vast marshland into a progressive urban center characterized by a grid plan and purposefully laid-out neighborhoods, similar to American cities.

With Fernando Zobel de Ayala’s grandfather, Alfonso, and Ayala Corp. director Jaime C. Velasquez, McMicking created a master plan for the future Makati and its CBD. Velasquez became chief executor. The popular park in Salcedo Village is named after him.

McMicking meticulously laid down the framework—designated areas for residences, condominiums, offices, light industry and retail venues all within reach of one another. He anticipated the need for constant regeneration through improvements and innovations to maintain order as the city evolved. Thus was created a designated body to conserve the aesthetics of every zone and neighborhood at pace with corresponding land value escalation. With exemplary governance, Macea has fulfilled its mandate seamlessly.

Architect William Coscolluela, Macea president and CEO, writes in the book’s preface: “Working hand in glove with the Ayala Master Plan, conceptualized by Col. Joseph McMicking, the Association was to play a significant role in upholding the standards and policies established by the landmark blueprint for a 21st century city.”

Vision and implementation created the perfect conditions for Makati to pioneer in vertical living ventures and become a quintessential financial hub with vibrant retail and arts scenes.

Author Liza Nakpil presents a concise chronology. A pictorial timeline starts from 1834 with a photo of Casa Roxas (predecessor of Casa Ayala), the oldest business establishment in the country, on to Hacienda de San Pedro Macati in the mid-19th century, milestones in Ayala Corp.’s history, and landmark buildings and infrastructure up till the present.

The new urban center began with the development of an exclusive residential enclave with wide open spaces and trees lining streets that ran through generously sized prime lots.

The erudite artist Fernando Zobel—in between researching on Philippine art, painting and bonding with colleagues on the scene in the 1950s—became part of the committee that executed the master plan. He persuaded a fellow Harvard alumnus, former Gov. Gen. William Cameron Forbes, to lend his name to the new community.

The book effectively shows that, within the CBD, land has been used for diversified but compatible interests. Each zone provides opportunities for different functions. Nakpil cites buildings that have strongly established their significance, either through sheer massiveness, or through their crucial role in the economy.

Making Makati walkable, smooth sidewalks, well-lit underpasses and elevated walkways connect offices to the main commercial center. Most are decorated with graphic murals and photographs that lend them a cosmopolitan character. Along with restaurants, public parks, public art spaces and art galleries, they serve as essential components to larger developments.

As the city continues to evolve, urban planners and developers have started weaving nature into the structures, as exemplified by Ayala North Exchange Tower, inaugurated in 2019.

The book’s final chapter envisions an even more modern Makati, which promises farther-reaching mobility with a subway plan that includes 10 stations within the city, maximally upgraded fiber-optic technology for optimum connectivity, and more towers that would brandish distinctive architectural, environmental and engineering wonders. Plans are afoot to give suitable incentives to new buildings that provide bigger green spaces and more robustly promote arts and culture.

It is high praise for its planners and managers that Makati, already a highly urbanized powerhouse, continues to create anticipation for the future that can feel this good. —CONTRIBUTED