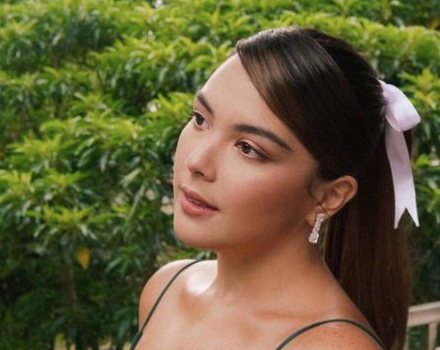 Ria Atayde on working with mom Sylvia Sanchez: ‘Easier than I thought’

Working with her mother, veteran actress Sylvia Sanchez, initially sent shivers down Ria Atayde’s spine, but she later realized that it was the best experience she ever had in acting.

“It’s easier than I thought. I was dreading it from the start na magtatrabaho na kami ng mom ko (that I would finally be working with my mom),” Atayde said during the online press conference for the new series “Misis Piggy” last Thursday, April 21.

It did not help that her first scene in this project with her mom involves heavy drama.

“I feel like, in hindsight, it’s a better decision that he (director Carlo Enciso Catu) made for me also as an actress, [because] emotional scenes are the hardest to do, right? And then [it is even] with my mom. ‘Oh, my God, can I cry in front of my mom?’” she said.

The initial take was okay as it “made the whole experience easier.” In fact, for her, it helped that she was doing the scene with her real mom because she did not need to pretend anymore.

Atayde also clarified that it is not really her first time to work in the same project with her mom. She was cast in the ABS-CBN TV series “Ningning” (2015) where she played the role of a teacher of Ningning, while Sanchez was Ningning’s grandmother.

“[But] this time, more than being a mom on the set, we’re able to have a professional relationship. It really helped with what we are doing. It really gave me my space and I really appreciate that,” she explained. “As much as she is my mom, she treated me as an actress more than anything.”

As Lani, the eldest of Sanchez’ three children in “Misis Piggy,” Atayde recognized that she has something in common with her character, and it is in terms of handling responsibilities for the family.