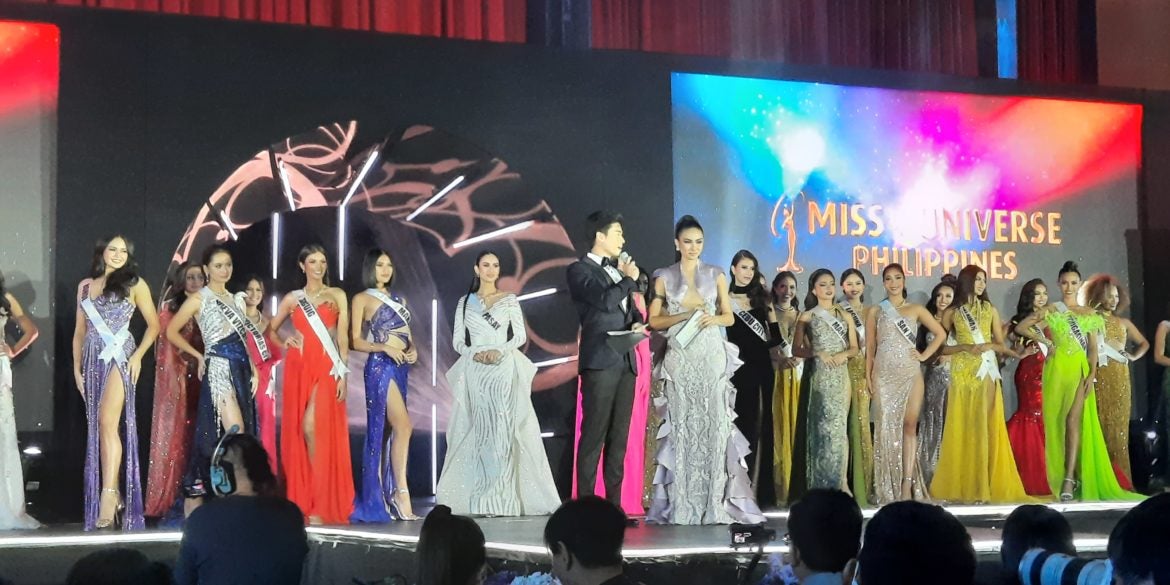 MANILA, Philippines—With much looser pandemic protocols in place, the Miss Universe Philippines pageant was finally able to conduct a live presentation for its preliminary competition that was open to the public on April 27 at the Cove Manila Indoor Beach Club at Okada Manila in Parañaque City.

Since its inaugural edition in 2020, the pageant had been mounting the preliminary competitions under strict COVID-19 protocols, with restrictions on having a live audience. This year, the Miss Universe Philippines organization (MUPH) is pulling out all the stops to make up for the time the activities were limited to pre-taped productions, and spectators were barred from witnessing the ceremonies on-site.

The 32 delegates from all over the country competed in the swimwear and evening gown segments before a crowd that greeted them with cheers and applause, as well as a sizeable number of members of the media that the preliminary competitions of the two previous editions did not have.

Aside from the showcase of beauty and “pasarela” from the delegates, the crowd was also treated with the sight of reigning Miss Universe Harnaaz Sandhu from India, as well as performances from Anji Salvacion, Gabriel Umali, Yheen and Yuki, and Filipino-American rapper EZ Mil.

The preliminary competition will help determine who among the delegates will advance to the semifinals, combined with the scores from the interviews conducted earlier. And as in its two previous editions, the Miss Universe Philippines pageant will welcome another delegate to the Top 16 who will garner the most votes via the e-commerce platform Lazada.

Gomez will relinquish the Miss Universe Philippines title to her successor who will be proclaimed at the coronation night on April 30 at the Mall of Asia Arena in Pasay City, where Sandhu will also sit as one of the judges.

Pia Wurtzbach, the third Filipino woman to win the Miss Universe crown, will host the program together with her successors Iris Mittenaere from France and Demi-Leigh Tebow from South Africa.

The 2022 Miss Universe Philippines coronation night will be streamed in real-time for free on the ABS-CBN Entertainment YouTube channel and on the iWantTFC platform. GMA will air it on free TV on May 1 at 9 a.m.