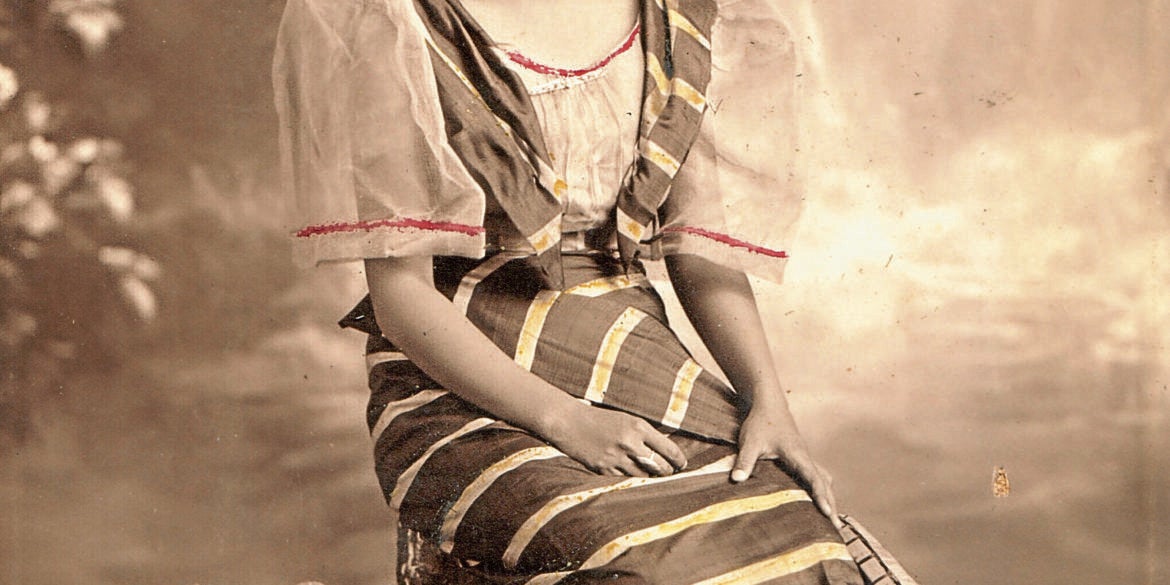 Circa 1930s Balintawak from the album of Inang Paras. Traditionally the “alampay” matches the “tapis.”

The second Ternocon held in January 2020 was one of the last big events held before the world went into lockdown. It had only been a few days since Taal Volcano in Batangas spewed plumes of ash that reached as far as Manila, and news of a deadly virus was already stoking fears.

That glittering evening, however, guests in terno and barong Tagalog swanned around the lobby of the Cultural Center of the Philippines (CCP) before being ushered into the main theater for the show where the terno was the star. Before the collections of the contestants were shown, mentors Lesley Mobo, Ivar Aseron and Philip Rodriguez first presented their own creations. The gold medal winner was Hannah Adrias, whose military-inspired collection caught the eye of the judges.

For the third Ternocon set for January 2023, the organizers, namely CCP through its Cultural Exchange Department (CED) and Bench/Suyen Corp, have decided to tone it down to reflect the times. Artistic director Gino Gonzales said it would be held in the afternoon for a more relaxed affair.

Last week, Gonzales, with designer Mobo, writer and historian Felice Sta. Maria and social historian Isidra Reyes gave online lectures to all the applicants on the topics “The Balintawak: Evolution, Context and Components,” “A Designer’s Creative Process,” “Filipinas who Wear the Terno” and “Wearing One’s Heart on One’s Sleeve.”

This year, there were close to 80 applicants compared to the two previous Terncon competitions, with only around 50 applicants both times.

“We also received a lot of online inquiries, but we are going to be as stringent as we can before we decide on the final 12 contestants,” Gonzales told Lifestyle in a phone interview.

In the past, the mentors led by veteran designer Into Sotto went through all the applicants’ designs and earlier works to check on their capabilities.

“For them to even be considered, they should already have certain skill sets in design, cutting and pattern making. They can’t be ordering a seamstress or a cutter to do their work for them,” Gonzales said.

Also important is that finalists should be able to work with and take direction from their mentors. Gonzales said that in the past, there had been a few who refused to heed their mentors or were difficult to work with.

“They should realize how much work and time we all put in for this project, so we expect 100 percent participation from them.”

This year, finalists will be tasked to create their version of the balintawak, which Gonzales described as “a more comfortable, country version of a terno.” The butterfly sleeves will still be present but unlike the more formal terno, the balintawak is distinguishable by four points.

“It is worn with an alampay, not a panuelo; paired with a tapis, not a sobrefalda; puts an emphasis on informality with the chosen fabric, print and cut; and is more about the countryside than the city. It will be now up to them how they interpret these guidelines,” he said.

“Another thing that’s different now is that they’re only required to make one outfit, unlike before when they were expected to make three terno using the P15,000 grant. It’s also the organizers’ way of helping them after two years of pandemic,” he added.

Gonzales has his hands full. Aside from his work as artistic director of Ternocon, he is also in charge of putting together an exhibit on indigenous clothing at the Ayala Museum, and is overseeing the refurbishing of Casa Gorordo, the museum in Cebu City housed in an old bahay na bato.

“We’re counting on the youth to push the terno forward, but we’re also thrilled to work with senior applicants. It’s heartening to see them working alongside their younger counterparts, to see their humility.”

The competition is open to practicing Filipino designers or fashion design students who are at least 20 years old. The 12 finalists are expected to create one balintawak each.

The finalists will be known by June 12 and will undergo RT-PCR testing before a week-long, locked-in workshop and mentoring in July and October. The final competition and cultural show are slated for Jan. 28, 2023.