Will we open a Pandora’s box tomorrow? | Lifestyle.INQ ❮ ❯ 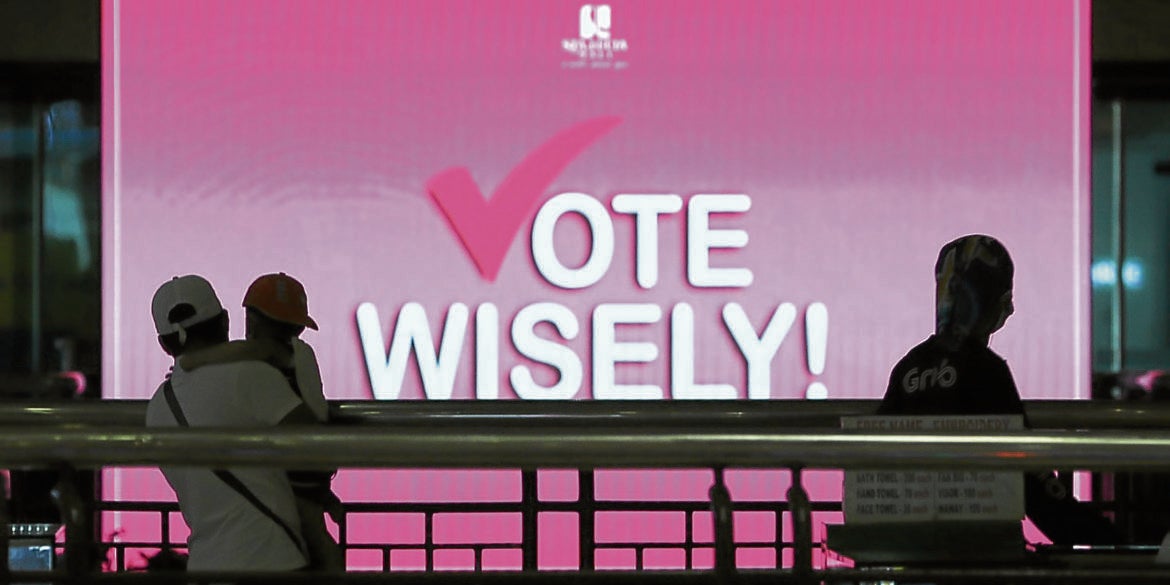 A public message for mallgoers in Cainta, Rizal, ahead of tomorrow’s elections, seen on May 3 —INQUIRER PHOTO

Will we open a Pandora’s box tomorrow?

It’s crunch time, and before I mix my metaphors, I will go directly to the point.

Tomorrow, May 9, when we go to the polls, the presidential race has boiled down to two front-runners. Our viable choices are two candidates who are polar opposites—one with a clear, comprehensive vision and program, the other with none; one with a concrete record of accomplishments, the other with a predominant record of inaction; one with an unsullied personal and political background, the other carrying unresolved and unregretted past and present baggage; one consistently taking decisive action and inclusive participation, the other engaging in constant evasion and isolation.

Tomorrow, the future of our country will be totally and collectively in our hands, assuming that those in charge of the electoral process will perform their sworn duty transparently, fairly and efficiently.

The Commission on Elections (Comelec), conceptually the independent government agency exclusively tasked to oversee the electoral process, will be in the driver’s seat but at the same time in the hot seat.

Let us hope that despite its dubious present composition in the eyes of many, and its missteps and subpar performance to date, it will ultimately rise to expectations and justify the people’s faith in this most basic and essential element of democracy.

It is the consensus that this election is a major turning point in our country’s history, and there should be no doubt about the validity of its outcome, especially with regard to the presidency and the other national positions. If the Comelec falls short in its task, it will find itself at the center of widespread electoral protests and political unrest.

On the other hand, if it emerges from the process with flying colors, it will emphatically put to rest all the doubts and criticisms on the qualifications and objectivity of the President’s appointees to recently vacated posts. For their sake, and that of the Filipino people who are implicitly placing their trust in them, let’s hope for the best.

The other crucial issue in tomorrow’s exercise is the actual collective choice of the Filipino people themselves for the most important position—the presidency. The election has obviously narrowed down to two winnable candidates—an over-achieving Vice President and the under-achieving son of the late deposed dictator who has surged through historical revisionism with the help of an army of paid trolls, and is presently supported by a coterie of traditional politicians wanting to return to power.

The common sense choice is obvious, but apparently it is not. To put it in clear perspective, I will use two familiar examples from Greek mythology, because myths have a way of dramatically emphasizing the consequences and repercussions of human choices in real life.

Tomorrow we will have the option to open a Pandora’s box and let loose a host of troubles which will plague our lives in the foreseeable future. In the Greek myth, Pandora was the first human woman (counterpart of the Bible’s Eve) who was sent to earth by Zeus with a securely sealed box (originally a vessel or jar), with strict instructions not to open it.

But overcome with nagging curiosity, she eventually opened the box, releasing all the troubles and ills that have plagued the world ever since—evil, suffering, strife, sickness, death and destruction.

A strikingly apt interpretation of its significance in today’s world is this excerpt from an article in thoughtco.com: “‘Pandora’s box’ is a metaphor in our modern languages, and the proverbial phrase refers to a source of endless complications or trouble arising from a single, simple miscalculation.”

For the Filipino people, that single, simple miscalculation can happen tomorrow.

In my recent pieces, I have repeatedly enumerated all the likely travails we will encounter if we choose to relive the purported “golden age” being extolled by the late dictator’s son, peddled by an army of mercenary trolls in various social media and picked up by credulous supporters who have bought into this historical fiction.

By now, the avalanche of disinformation and fake news has been convincingly belied at every turn by truth seekers who have diligently done their own research and have come out with the evidence-supported truth. I see no further need to refute all these now discredited historical distortions foisted upon us in social media. If there are still some who choose to believe in falsehoods this late in the day, then nothing and no one can ever convince them otherwise.

As an alternative to choosing what will be an obviously flawed presidency, the mythological equivalent of choosing wisely is to dip into a cornucopia of prospective blessings that await us.

Literally translated as “horn of plenty,” cornucopia was a legendary goat’s horn overflowing with fruits and vegetables of every kind, symbolizing abundance and prosperity. While electing the most qualified presidential candidate doesn’t automatically guarantee an idyllic golden age of prosperity for our country, the potential for it is as clear as day compared to the darkness of night. To get there, we have to do our fair share to help our chosen leader make all this promising potential into reality.

The very first step is for us to make the crucial right choice tomorrow. —CONTRIBUTED