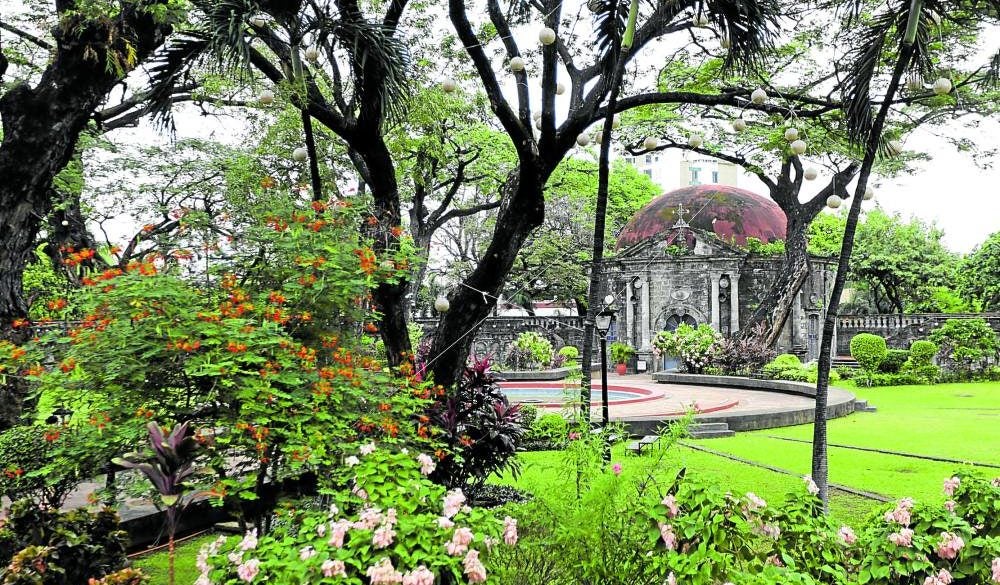 Paco Park is cited as a national treasure by the National Museum. St. Pancratius Chapel, managed separately by Adamson University, peers behind the trees and foliage.

One of the last historic and green spaces in Manila, Paco Park is a community center, a venue for intimate weddings and cultural programs, and a promenade for pets. The 4,100-square-meter site is defined by a circular layout that provides different areas for activities and contemplation, all of which are planned around a central hub, the fountain area.

Though picturesque with circular limestone walls adorned with Ionic columns and surrounded by frangipani trees, and a dome church framed by centuries-old acacias and tall dogwood trees with pink flowers, the park’s romance lies in its history as a former cemetery.

While “Paco Park Presents” concert series has been its best PR, it has likewise been used as a movie set for horror movies and featured on TV for its ghost stories—real or imagined.

“We walked around with a spiritista last Halloween, and every corner exuded different energies,” says Jezreel Apelar, deputy executive director of the National Parks Development Committee (NPDC), the manager of public parks.

For two nights in 2021, the public learned more about the park’s history while roaming with a “paranormal researcher.”

Apelar recalls that the spiritista detected the presence of a guardia civil. In the children’s burial site, she felt the energy of kids running around.

The “ghost bride” named Margarita Miguel de Cobarrubias is the most popular urban legend. During the All Saint’s Day 2020 episode of “Kapuso Mo, Jessica Soho,” a paranormal researcher felt Margarita’s overpowering presence, such that he kept on vomiting in front of the camera.

Apelar cites stories of mysterious blurry figures as the photo bombers captured in videos or photographs and an inexplicable scent that wafts at night despite the fact that there are no fragrant flowers in the park.

He quotes the spiritista as saying that the ghosts are harmless and are merely curious about the park’s users. One security guard said that in the early days of his post, he would feel a presence brushing against his arm during the nightly inspection. Over time, the spirits had grown so accustomed to him that strange occurrences had stopped, he said.

Paco Park’s name dates back to the district’s history. The Franciscan missionaries established this community outside of Intramuros in 1589. The place was named Dilao, after the yellow amaryllis that grew in abundance in the 16th century. It later became an allusion, albeit bigoted, to the enclave of Japanese migrant workers and Christian refugees.

In the 19th century, the place was renamed Paco, an abbreviation of Francisco, in reference to the Franciscans.

Upon a government mandate, a cemetery began its construction in 1817, originally intended for the elite. In 1820, the plague of cholera in Manila drove angry Filipinos to massacre Europeans and some Chinese, believed to have spread this diarrheal disease.

Don Nicolas Ruiz, a maestro de obras (a Filipino master builder aspiring to be an architect), was tasked to design the cemetery to accommodate the growing death toll. Envisioned as the best of the cemeteries, it was inaugurated on April 22, 1822. Niches were built into the thick walls.

In 1859, Governor General Fernando de Norzagaray planned the expansion by constructing an outer circle to include more niches. These niches were rented for P20 and renewed every three years. The tops of the cemetery walls were turned into walkways that overlooked the landscape.

‘Believe It or Not’

Engraved on niches were familiar names such as Preysler, Perez de Tagle. However, Paco Park’s most famous residents are the heroes.

It was the burial ground for three martyr priests—Jose Burgos, Jacinto Zamora and Mariano Gomez. They were accused of inciting the Cavite Mutiny in 1872. Although the revolt against the oppressive Spanish government failed, the deaths of the priests sparked a wave of nationalism which later led to Philippine independence.

Then there’s the oft-repeated story of how Jose Rizal’s sisters searched for the freshest grave after his execution in 1896. Upon their discovery in Paco Cemetery, they asked the guards to flip his initials to RPJ on the marker so that it would not be recognized by the Spaniards. His remains were unearthed two years later and brought to its present site in Luneta in 1912.

A casualty in the Philippine-American War in 1899 and the first general to be killed outside of the United Statess, Maj. Gen. Henry Lawton was given a tribute when his body was in repose at St. Pancratius Chapel at Paco Cemetery.

American cartoonist and amateur anthropologist Robert Ripley visited Paco Park in 1932. He featured the rental of the niches and how the remains were disposed of for nonrenewal of fees in “Believe It or Not,” his illustrated series on peculiarities around the world.

During the Japanese occupation of Manila, the soldiers turned the cemetery into an ammunition depot and central supply.

The cemetery was transformed into a recreational public park under the NPDC in 1966 during President Diosdado Macapagal’s term. By the ’70s, first lady Imelda Marcos spearheaded the beautification of the park by commissioning National Artist for Architecture Ildefonso Santos.

For so long, the park was merely a functional design of a double ring of 4-meter walls with sections for adults, children and toddlers; an arched gateway; St. Pancratius Chapel; and the grounds.

To prevent flooding, a raised central hub, covered with pebble wash, was built. A circular bench surrounded the dancing fountain.

NPDC Vice Chair Teodoro Valencia launched initiatives to make the park more inviting to the public. He worked with the German Embassy to start the “Concert at the Park,” a series of alfresco musical concerts. Since 1980, the musical series has been ongoing, though virtually since the pandemic.

Five years ago, Escuela Taller de Filipinas, a school on heritage conservation skills for underprivileged youths, undertook the restoration of the niches to their original glory. The project was funded by the National Commission for Culture and the Arts and Spanish Agency for International Development Cooperation.

On May 20, Paco Park will hold its first on-site cultural program which marks the official celebration of its 200th anniversary and the inauguration of its plaque, citing Paco Park as a national treasure by the National Museum. The event will be graced by Tourism Secretary Bernadette Romulo Puyat and the diplomatic corps. It will present an exhibit of historical photos and the launch of the master plan competition for Paco Park, led by Urban Land Institute.

“The park is laden with layers of history, but what’s existing are the vestiges of the Marcos era. Though the park is scenic, we need a master plan to refresh it for the 21st century,” says Apelar. —CONTRIBUTED