These 1960s Malabon treats are blasts from the past | Inquirer Lifestyle ❮ ❯ 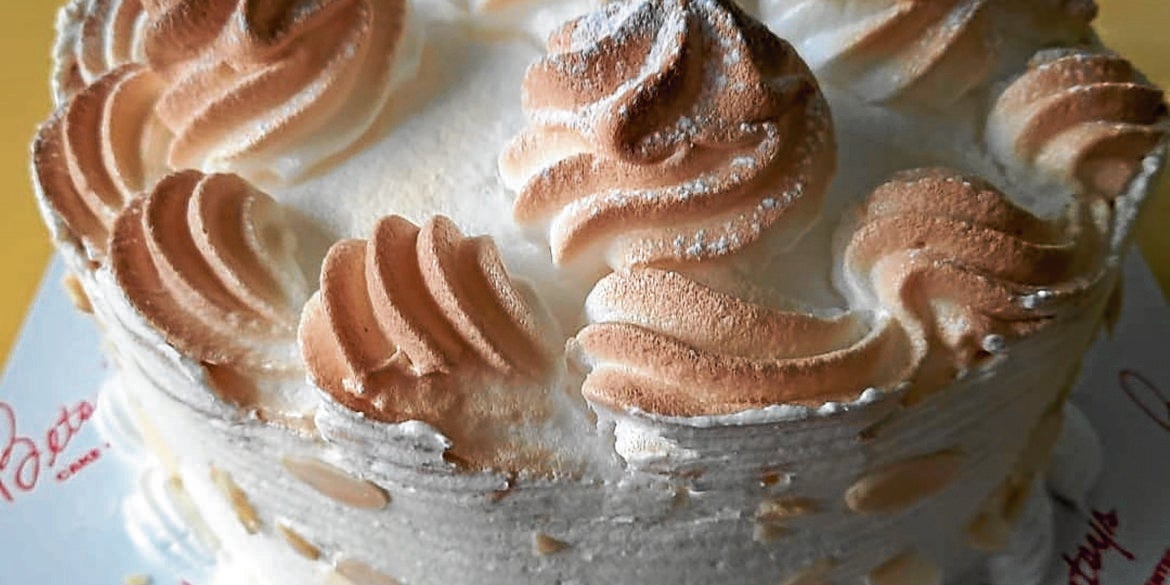 These 1960s Malabon treats are blasts from the past

Betsy’s was started by Bellaflor Serna in 1962, naming the business after only daughter Betsy David. Back then their products were limited to breads.

It was Betsy, a natural-born cook and baker, who made the cake house what it is today.

In her teens, she came up with a custard cake recipe that won her an oven at the Maya Bake-Off contest. Since then, she has grown her repertoire, concocting food and sweet treats that put Betsy’s on the list of places to visit when in Malabon.

It is the home of the soft broas—a sponge cake version of lady fingers with buttercream sandwiched between them.

Other bestsellers include the Pinoy Burger—soft brioche bun, homemade burger patties and yellow mayonnaise made from scratch.

The Ramona is chiffon cake iced with yema, then torched. In between the cake layers are buttercream, chocolate mousse and even more yema.

Branzrival, a cross between brazo de Mercedes and sans rival, is also sought after.

Their Marshmallow Cake is legendary. A chiffon cake with marshmallow frosting, the recipe has been in existence for decades. It is a favorite among those from Malabon as it brings back memories of their youth.

The savory offerings at Betsy’s include a vegetable cuapao created for vegans, and truffle cuapao.

My personal favorite, however, is their buko pie, which is unlike any other. Imagine a pie crust with young tender buko, cooked with cream. Tapioca is added to the filling. This is then capped with a layer of egg pie-like custard, then crusted with a thick streusel topping. I didn’t share this pie with anyone. I just loved it, for its simplicity as well as its uniqueness—sweet, creamy, with chewy pearls and crumbly streusel. The pie is delightful in taste and texture.

I learned that Betsy’s popularity goes beyond Malabon and Navotas. With the help of family, the business has expanded to the United States, to Los Angeles, San Diego, San Francisco, Long Beach and Chicago. At the height of its popularity, there was even a French restaurant called The Betsy that was featured in the Hollywood movie “Black Moon Rising.”

When I asked Bessie David del Rosario what her mom’s secret is, she answered, “Fresh ingredients and a pursuit of perfection. Add to that my mom’s continued efforts to curate her recipes. We still sell the Betsy Roll from 60 years ago. It looks the same, but now it tastes better.” (tel. 0915-6935639; @betsyscakesmalabon on Instagram)

It is not news to you that I am a fan of chef Redd Agustin for his slow-cooking techniques.

As I’ve professed once, in a piece I wrote about him, Redd’s flavors linger in my mind. Everything he touches has a je ne sais quoi. So much so that adobo isn’t simply so; it becomes adobo a la Redd.

His “CPA” in adobo oil is to die for. It is the tastiest flaked adobo I’ve ever had. The oil alone is divine! This is a must-try, just warmed over rice with a fried egg. It is, for me, in a gauge of what adobo should be.

Even with pan de sal, it is delectable. See, the “CPA” is slowly braised in pork fat. It is seasoned and made tasty with the addition of patis, soy and lots of garlic. It is cooked over very low heat, for six hours. (tel. 0917-4382133; @theporkproject on Instagram)

The heat has been excruciating and I’ve been getting many requests for palamig recipes. Here’s a simple one from my cookbook, “Notes from My Kitchen 2.”

Gulaman: 2 boxes Alsa red gulaman, prepared according to box instructions, or use one box each of red and green.

Cook until syrupy and strain. Add vanilla and cool.

If buying cooked sago, make sure to blanch in boiling water. Wash and drain before using.