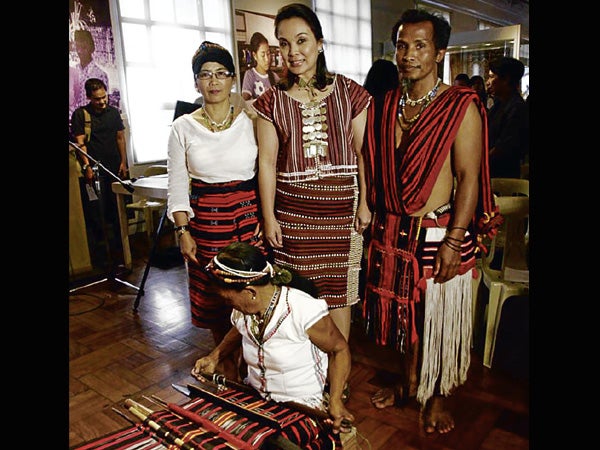 Loren shares her passion with the public—indigenous textiles

“Hibla ng Lahing Filipino: Traditional Philippine Textile Gallery” aims to highlight the commonalities of the country’s 110 ethnolinguistic groups through shared indigenous weaving technologies, and is an initiative of Sen. Loren Legarda, chair of the Senate Committee on Cultural Communities.

The galleries are a “lifelong dream,” according to the senator, who has been collecting indigenous fabrics for three decades.

“What she wanted actually was a museum just for textiles,” said Ana Maria Theresa P. Labrador, the curator. “But we had to make do with this,” she said, citing budgetary constraints. The galleries are housed in the adjoining Queen Sofia Hall and Hall 318 in the Old Legislative Building of the National Museum on P. Burgos Drive, Rizal Park, Manila.

The inaugural exhibit includes items from the National Museum’s own collection, as well as textiles and clothing from Legarda’s own private collection. On view are samples of abel Iloko from Vigan, Tinguian blanket from Abra, Gaddang garments from Ifugao, as well as textiles from Polomolok, South Cotabato; and Maranao garments from Southern Mindanao.

The current exhibit will run for six months beginning May 18, when it opens to the public. The galleries will have revolving exhibits every few months, Labrador said. The galleries, said Legarda, are a work in progress; video presentations and the like will be added when it opens in May.

The galleries’ soft launch coincided with the  “Forum on Intellectual Property and Traditional Knowledge,” of which Legarda was also keynote speaker.

In her speech, Legarda stressed the importance of seeking ways to document and protect indigenous intellectual property and traditional knowledge. “Given the bulk of…traditional knowledge covering almost all aspects of life, our indigenous communities should now be rich in economic terms, if the benefits of bringing to the mainstream these practices and intellectual properties, which they have generously shared with the world, actually flowed back to them.”

She cited the 1999 Roundtable on Intellectual Property and Traditional Knowledge held in Geneva, which said that traditional knowledge encompasses arts and crafts, music and literature, health care, agriculture, forestry and fishing, mining, and architecture.

“Many of us do not realize that various aspects of our modern lifestyle originated from traditional practices… We see mainstream arts, music, handicrafts and weaves similar to indigenous practices but we have yet to trace if permission was sought in the use of such knowledge and if proper credit was given.”

Legarda, in a call to the Inquirer, said she will fund efforts by state universities to study and document the country’s ethnolinguistic traditions.

“I started meeting with the National Museum only last year, but this vision has been on my mind for so long, as early as the ’90s, when I was still a journalist,” Legarda said.

She noted that the gallery is a “collaboration” of various agencies. Legarda has held mini-exhibits in the Senate for indigenous crafts and garments in the lead-up to the opening of the textile gallery.

In 2004, the Philippine Tropical Fabrics Law seeking to promote local fabrics through the uniforms worn in government offices was passed. Legarda was its principal author. She acknowledged that while the law isn’t as far-reaching as she would want, it’s a good start.

Legarda said there will be efforts to make the local textiles economically viable for the indigenous groups. The primary goal, she said, is to create awareness of such traditions, document them, and, possibly, set up a retail point for these crafts. She said the private sector can do its part by investing and patronizing indigenous textiles.

Every third Friday of every other month, there will be a lecture series on Philippine Traditional Textiles and Indigenous Knowledge at the Textile Galleries. There are about 200 indigenous textiles, according to Labrador, and some are no longer being produced, either because there’s no longer commercial demand or the younger generation has lost interest.

“In our previous textile exhibit in the museum, we focused on the regional boundaries,” Labrador noted. “Senator Legarda wanted to focus on the commonalities of our ethnic groups. I think it makes sense; if you look closely, you will see that the ethnic groups shared technologies, and they also used textiles for trading.”

“The ways and means of our IPs may be ancient as to the standards of modern society,” Legarda said in her speech, “but everything that we have now is not a product borne out of the minds of people from this generation alone, but a mere reflection of the creativity, resourcefulness and passion of those people who have lived long ago creating their own identity, building a sustainable community, forming unique practices, surviving with their own rich culture, passing it on to their children, and generously sharing it with others.

“To all of us who have gained so much from this ingenuity, perhaps, it would not be too much to give the fitting recognition long overdue to our IPs and to allow them to benefit from the very knowledge that had rooted from their communities.”