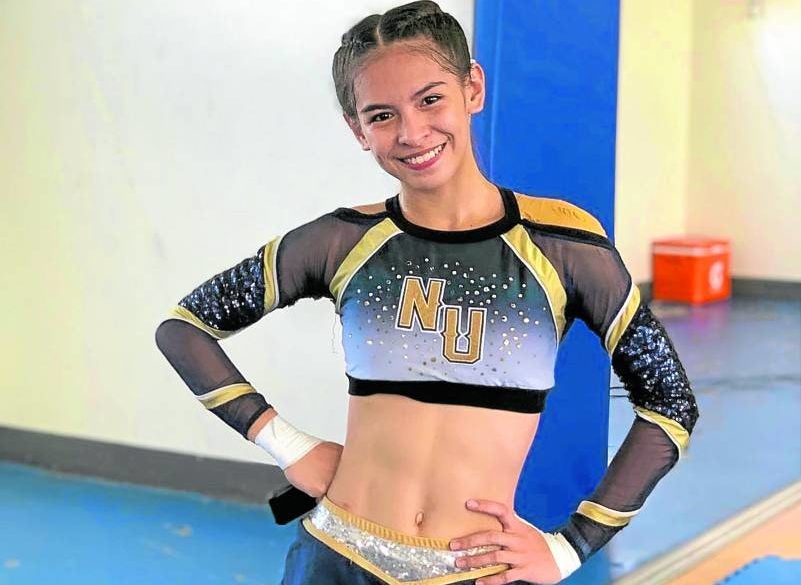 The first University Athletic Association of the Philippines (UAAP) Cheerdance Competition (CDC) since 2019 is happening on May 22, and fresh faces take over after coming from a two-year break.

A second year BS Psychology student at National University (NU), Vigie Ann Calleja is expected to be the poster girl of NU.

Vigie is the youngest among the five Calleja sisters, well known in the country’s cheerleading world for their skill level. She has big shoes to fill.

Vigie explained that she and her sisters were gymnasts turned cheerleaders. “Kaming lima gymnasts talaga kami since elementary,” she said. They all started as early as third grade back in Norzagaray, Bulacan, because their school had a gymnastics program.

She and her sisters competed in Palarong Pambansa and were all scouted by NU because of their tumbling skills.

“I started in Grade 11 as a National Cheerleading Championships qualifier. That was my first competition as a cheerleader. Tapos nag-champion po kami.”

Although Vigie has only won one championship in her cheerleading career, she has always placed first in gymnastics since she was in Grade 4. She looks forward to achieving what her sisters have in cheer dance. “Gusto ko rin n’un! Ang galing-galing nila, na-inspire ako sa kanila,” she said.

According to Vigie’s sister, Nelli, the older sisters are both Vigie’s strength and weakness, “dahil nacha-challenge siya, minsan naiiyak siya ’pag hindi niya nagagawa ’yung skill.” She said that Vigie’s mentality may sometimes cause her feeling of defeat.

Besides, the last Calleja sister to perform in the UAAP CDC was Mary Ann, so Vigie has a lot of pressure on her. “Si Mary Ann talaga ’yung tipong ‘wow,’” said Nelli. “Ang galing-galing niya para sa amin.”

Competing UAAP sports for Season 84 had to be put in a bubble setup, and consequently has affected student-athletes’ routines. Vigie is no exception as she has class from 7 a.m. to 5 p.m., and training from 6 p.m. to 11 p.m.

Although Vigie is a Bulldog (the NU mascot), she describes herself as a cat off the mats. “Kasi malambing tapos may pagkamaldita nang konti ’pag kailangan. Malambing naman ako and sobrang caring sa ibang tao.” She added, “Madaldal po talaga ako and sobrang kulit.”

Nelli, however, described Vigie on the mats as “palaban,” explaining that although Vigie is only 5 feet tall, it seems as if she could eat up a 6-ft person with her game face.

The nerves may get to the cheerleaders quite easily. Vigie calms herself down by taking three deep breaths.

Vigie said that she has a lucky charm: “May lucky socks ako, na ’yun at ’yun lang ’yung ginagamit ko every competition.”

In 2018, Vigie competed while injured. The injury on her left foot recurred from when she was a gymnast, and she later injured her right foot in cheer.

The author is an AB Communication sophomore at Ateneo de Manila University and is a member of Blue Babble Battalion.