Migz Salazar: 'To the Moon and Back' at Robinsons Land’s ARTablado ❮ ❯ 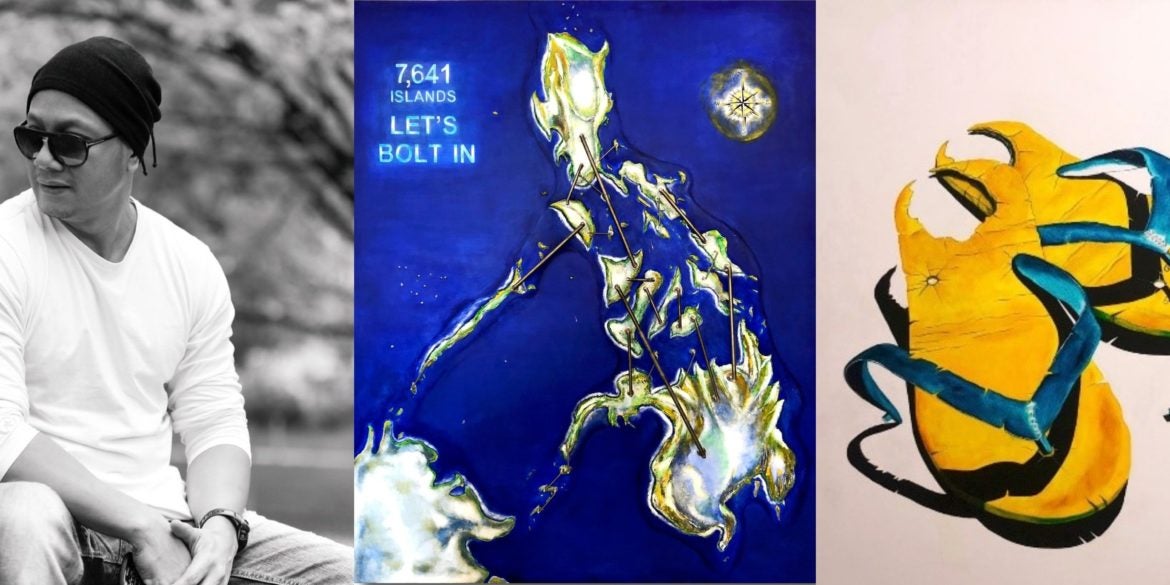 (Photo shows from left): Migz Salazar, the first Filipino contemporary visual artist to win the “Bust of Pablo Picasso International Art Prize” for 2019 in Lecce, Italy, “Bust of Julius Caesar International Art Prize”, conferment for highest recognition in “Arts for Human Rights,” and the “Francoise-Marie Arouet Voltaire Prize for Civil Rights and Social Commitments” in 2018; The Cradle - Land That I Know by Migz Salazar; When We Were Young by Migz Salazar

Migz Salazar: ‘To the Moon and Back’ at Robinsons Land’s ARTablado

There is something quite romantic about the concept of loving someone to the moon and back that to say these words would equate to the strongest sense of affection one can feel for another. Unless one is physically capable of actually going to the moon and returning to Earth to profess one’s love across distance and years, the idea should remain a metaphor for the time being.

But for an artist the caliber of Allanrey “Migz” Salazar, that level of passionate love can easily be equated to his feelings for the visual arts. A thinking artist, Salazar is able to articulate his thoughts and feelings not only on the canvas but also through dialogue—understandably so as he has been exposed most of his adult life in Europe.

In the late 1990s, he took up brief formal art studies at Ecole Nationale des Beaux-Arts de Paris, took an intensive course in photography in Wurzburg, Germany, and later took up courses in Italian Renaissance art history in Florence and in Venice. Salazar would spend majority of his artistic career in Paris before finding himself back in Manila just before the pandemic began.

He was the first Filipino contemporary visual artist to win the “Bust of Pablo Picasso International Art Prize” for 2019 in Lecce, Italy, “Bust of Julius Caesar International Art Prize”, conferment for highest recognition in “Arts for Human Rights,” and the “Francoise-Marie Arouet Voltaire Prize for Civil Rights and Social Commitments” in 2018. He is also an Honorary Member of the Accademia Italia in Arte Nel Mondo Associazione Culturale in Lecce Italy from 2018-2020.

In the Philippines, he is a recipient of the Ani ng Dangal Awards (2020 and 2022) by the National Commission for Culture and the Arts as well as being an Ambassador of Goodwill by the Global Artists’ Creative Collaboration of Empowerment (GACCE) in California USA, an International Art Organization fiscally sponsored by the New York Foundation for the Arts.

With these accomplishments, Salazar could easily have just returned to Paris and continue to live what other artists could only dream of. And yet, as if guided by the heavenly bodies above, the Mindoro-born artist decided to stay in the country to further his legacy. And while others may have slowed down during the two years and counting global pandemic, Salazar remained true to form, creating larger-than-life-pieces that he says are part of his calling as an artist to “go beyond the canvas and marble… be compelled to have a purpose and advocacy concerning the current sociopolitical landscape”.

Just last February, as part of the National Arts Month, Salazar’s work was unveiled at the Quezon City Hall with Mayor Joy Belmonte and Vice-Mayor Gian Sotto as guests of honor. The work features a male bound by his wrists to a tree stump wearing nothing but his underwear and pair of beat up sneakers, on his hands a tattered Philippine flag while a warship is seen on the horizon seemingly on its way to the island.

Clearly, Salazar, armed his brush and paint, is on a mission. “To The Moon and Back”, his exhibition at Robinsons Land’s ARTablado, located at the 3rd floor of Robinsons Galleria is another step on accomplishing that. With some 25 of his more recent works, Salazar is hoping that the exhibition will encourage a deeper appreciation for the arts, open eyes and start a dialogue between artists young and old and let their imagination run wild and be open to creating things that will echo throughout space and time.

Established in 2020, Robinsons Land ARTablado, a portmanteau of “art” and “entablado” is Robinsons Land’s very own stage in showcasing the Filipino ingenuity and creativity. This platform allows emerging artists to freely express themselves through art and paves the way to greater recognition of their talent and hard work.

Ember by Josh Boutwood elevates the element of fire