The awesome world of Draw Something | Inquirer Lifestyle ❮ ❯ 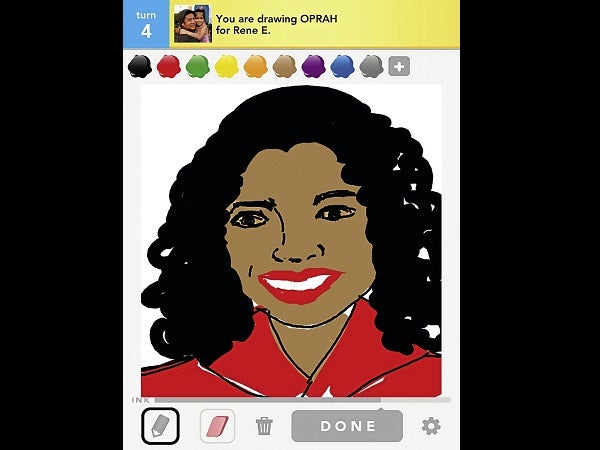 The awesome world of Draw Something

My inability to draw has always been a great frustration of mine.  I don’t even mean draw well—when I say I can’t draw, I am not exaggerating. I really can’t, which is why when new social game Draw Something began making its buzzy rounds on Twitter, Instagram and Facebook, I wasn’t enthused. Why play a game I was sure to suck at?

Of course, curiosity and peer pressure eventually got to me so I found myself trying it out on my iPhone. It only took one drawing to get me hooked, and soon I didn’t care that I was scaring strangers as I sat on a public bench giggling by myself.

Draw Something’s rules are simple: Choose from three words to draw, draw it for your opponent and wait for him/her to guess. The inadvertent hilarity ensues when your brain starts to interpret the words through squiggles and doodles—I’ve discovered that most of my drawings seem to have a phallic element, which I fully blame on my deplorable drawing skills and not my subconscious.

Draw Something’s blank canvas is also the stage for drama. One player found herself engaging in angry, scribbled R-rated name-calling over cheating (her opponent would write down the word instead of drawing it). We’re sure it’s only a matter of time before someone decides to use the game to propose and upload the footage on YouTube.

Some players’s drawings are relegated to mere stick figures with hints of abstract influence while others’ look like they belong in a museum—or maybe a T-shirt. It’s also interesting to see how a player explains a word through drawing—two opponents who were tasked to draw Michael Jordan had different approaches: One drew a hoop with a man dunking a ball spread-eagled, another simply drew a basketball jersey with the number “23.” Other words on the list are real head scratchers, how in hell does one draw Kwanzaa, the Macarena or Rza (P.S., Thank you, Draw Something for introducing me to Rza!).

Barely six weeks old in the market and this app has already racked up over one billion drawings, 35 million downloads and recently, big game brand Zynga (of Words With Friends and Facebook games fame) bought Draw Something from its developers for $200 million. Talk about an expensive work of art.

If you haven’t started playing yet, do it now. Download the free version and upgrade to a paid version once you get hooked (you will, we promise)—the paid version contains more words, 400 free coins to buy colors for your palette. Once you’ve downloaded it, pick up your finger and draw something!

Draw Something is available at the App Store for iPhone, iPod Touch & iPad and at the Android Market for Android devices.